UK PM Johnson: 'I'd rather be dead' than ask for further Brexit extension

The British Prime Minister Boris Johnson has ruled out asking for another Brexit extension, saying he would "rather be dead in a ditch".

He was replying to a question about whether he would resign rather than seek an extension from Brussels.

Speaking in West Yorkshire on Thursday, he said: "I'd rather be dead in a ditch" than ask for any extension past October 31st.

"It costs a billion pounds a month, it achieves absolutely nothing - what on earth is the point of further delay?", he said.

Earlier, his own brother Jo Johnson announced his resignation as a minister and MP over the Brexit crisis.

Announcing his decision on Twitter, he said: " In recent weeks I've been torn between family loyalty and the national interest - it's an unresolvable tension & time for others to take on my roles as MP & Minister".

It's been an honour to represent Orpington for 9 years & to serve as a minister under three PMs. In recent weeks I've been torn between family loyalty and the national interest - it's an unresolvable tension & time for others to take on my roles as MP & Minister. #overandout

On his brother's resignation, PM Johnson said: "Jo doesn't agree with me about the European Union because it's an issue that obviously divides families and divides everybody.

"But I think what Jo would agree is that we need to get on and sort this thing out".

His decision to step down is the latest example of upheaval in Westminster amid the ongoing Brexit impasse.

More than 20 Conservative Party MPs lost the party whip - effectively being expelled from the parliamentary party - for backing an opposition bid to block a no-deal Brexit. 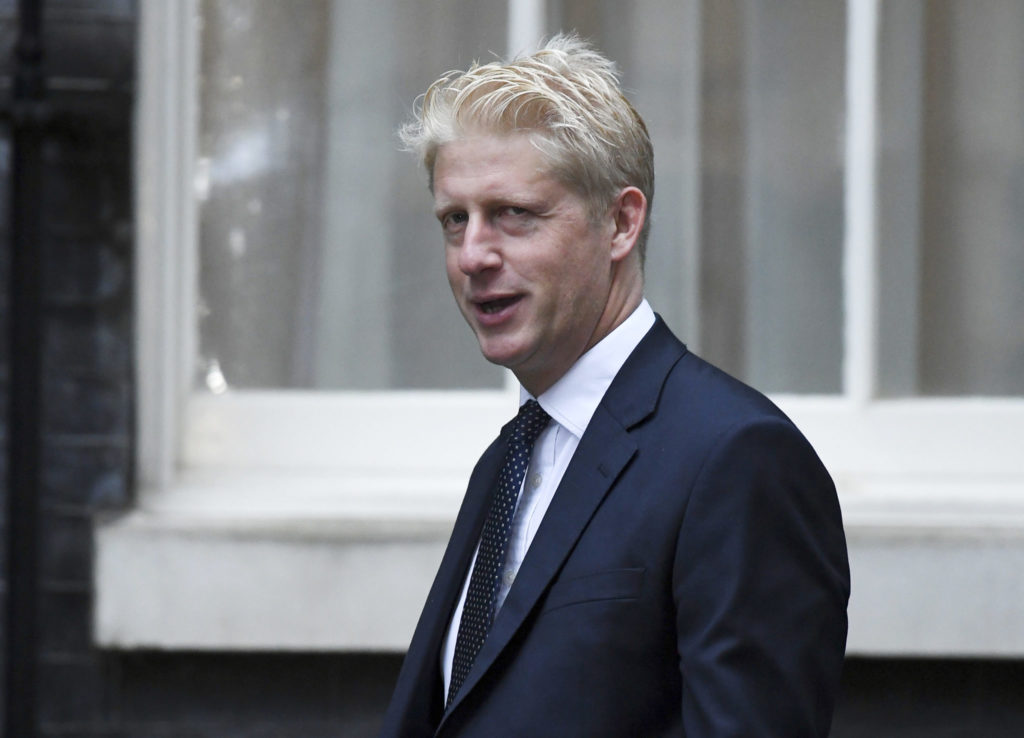 One of those expelled was Alistair Burt, who hit out at his colleagues over their treatment of Ireland.

Speaking on Wednesday, he said: "Ireland treated by some here as some sort of irrelevance, a place where they have made up the border issue in order to prevent us leaving the EU.

"With our history in relation to Ireland, everything that happened there, they became our best friends in the European Union.

"And our choice to leave, our Brexit, has put them in the most catastrophic situation of any country - and we now expect them to accept another English demand that they should do something.

"Have we no understanding of what that relationship means?".

A UK general election is likely to take place in the near future despite a failed attempt by Mr Johnson to trigger one on Wednesday evening.

Mr Johnson had tried to put pressure on UK Labour leader Jeremy Corbyn to back an election on October 15th, saying MPs' actions had "left no other option than letting the public decide who they want as prime minister".

Meanwhile, a bill preventing a no-deal exit is set to complete its passage through the UK's House of Lords on Friday.

It had been feared pro-Brexit peers could attempt to delay the bill ahead of the planned suspension of parliament next week.

However, a business motion was ultimately passed shortly before 1:30am on Thursday morning.

Members of the upper house were told the bill would return to the lower house by tomorrow - ruling out the prospect of attempts at a filibuster.

It means the bill could be voted on again by MPs on Monday and become law through royal assent shortly after.