The Minister for Justice has described the gathering of hundreds of people in Dublin yesterday to...

The Minister for Justice has described the gathering of hundreds of people in Dublin yesterday to protest against COVID-19 restrictions as "a really serious incident" that "should not have happened".

Helen McEntee commended the Gardaí for how they handled the protests after three officers were injured.

More than 20 people were arrested in total yesterday in connection with the protest which allegedly turned violent.

Several people have been fined and released, and a number of juveniles have also been released.

13 people appeared before the Dublin District Court last night in connection with the anti-lockdown protest in the city centre.

They were all charged with various public order offences, including threatening or abusive words or behaviour, failing to comply with a direction from Gardaí, resisting arrest and failing to provide the correct name and address to officers.

Speaking to Newstalk Breakfast with Susan Keogh, Minister McEntee said she was "extremely frustrated and annoyed by what happened yesterday".

"This was a very serious incident and you had quite a large group of people who set out to cause disruption and to cause harm," she stated.

"Gardaí were verbally abused, had things thrown at them, fireworks directed into them, these were not people who were there to peacefully protest and unfortunately, what they have used is the banner of COVID measures or people's frustration.

"We're all frustrated, we're a year now living with COVID, but people used that yesterday as an excuse for bad behaviour and it's simply not acceptable."

She described the rally as "a really serious incident that should not have happened".

On whether it should have been anticipated that such large crowds would gather, Minister McEntee said Gardaí have procedures in place to handle such incidents and are tasked with policing them as they see fit.

Online activity which promotes such protests are monitored by the force, she added, and Gardaí anticipated there would be a large gathering yesterday.

"I think the event itself probably gathered momentum as the day went on, and as is often the case with these events, people gather and join them," she said. 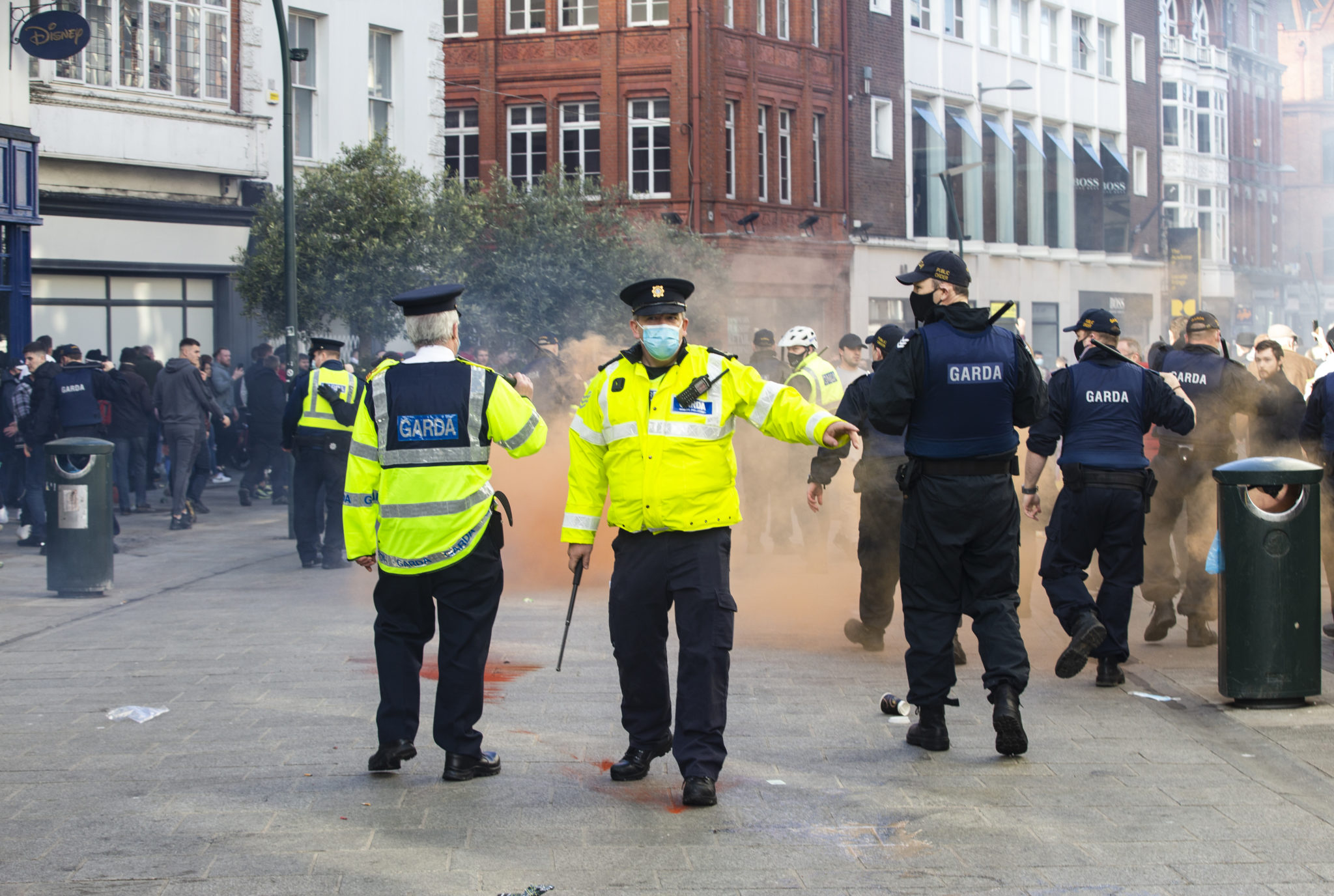 "But there was a policing plan in place, that plan was activated, and I really do have to commend the professionalism and the way in which the Gardaí on duty responded with great control but also great discipline on what was a very challenging situation.

"There is no excuse, under the heading or banner of COVID-19 and using people's frustration, for bad behaviour and that's exactly what happened yesterday."

The Minister added that "quite a few fixed-penalty notices" were issued in the wake of yesterday's events, in addition to the court appearances.

"These types of gatherings are against COVID regulations, they are against the law, and there are penalties and provisions there and the Gardaí were able to identify the organisers and they were charged so I have no doubt the Gardaí in this instance will be able to do that," she said.

"A lot of people are very frustrated given the last year we've had where people stayed at home, their lives and their livelihoods have been put on hold and to see this, it really is an insult to the huge amount of work that has been done by so many people."

Meanwhile, the Garda Commissioner Drew Harris has been criticised for saying both "far-left and far-right groups" were at the protests.

Minister McEntee said the Commissioner was referring to "violent Republican groups" when he mentioned the far-left.

"The Garda Commissioner has clarified that and his remarks, when he referenced the far-left, were in reference to more violent Republican groups, not in any political persuasion," she added.

"He has clarified those remarks and pointed to the fact that there were quite a few different groups that gathered yesterday that used this as an opportunity to wreak havoc on our capital city."

In a statement today, Commissioner Harris said "following further investigation, there is no corroborated evidence of extreme left factions being involved" in yesterday's events.

"The vast majority of those who took part belong to a number of factions including anti-vaccine, anti-mask and anti-lockdown protestors, far-right groups, and those intent on trouble and disorder," he said.