Ireland’s Delta surge will not be like previous waves of the virus – with cases likely to sta...

Ireland’s Delta surge will not be like previous waves of the virus – with cases likely to start falling in two or three weeks, according to UCC Professor Liam Fanning.

He was speaking after the Deputy Chief Medical Officer Dr Ronan Glynn warned of the potential for a “significant increase” in hospitalisations and intensive care admissions if cases figures continue to rise.

Speaking as 1,378 new cases were reported, Dr Glynn said the five-day moving average has increased by more than 300% in the past four weeks.

The figure has risen by 95% in the past week alone. 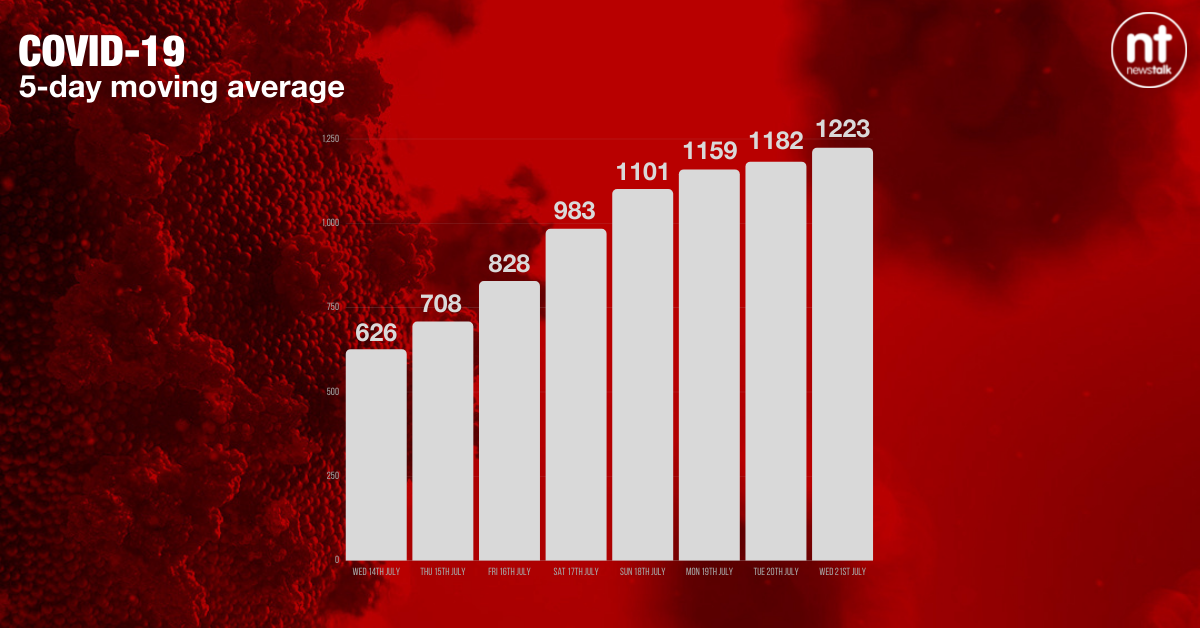 Despite the surge in case numbers, the number of coronavirus patients in intensive care has remained steady at 22, while the number in hospital has increased slightly to 96.

On Newstalk Breakfast this morning, UCC Professor of Immunovirology Liam Fanning said the current surge is “not going to be like previous waves.”

“We have a very large vaccinated population and we have a very successful vaccination programme that is going on at the moment,” he said.

“So that link [between cases and hospitalisation] is damaged maybe.

“We saw in Scotland, that wave they had very recently in June, its trajectory rose quickly but it actually decreased quicky as well because of the continued rollout of the vaccine programme that gave that protection from hospitalisation and ICU.

“So, we are into a very short window of about two or three weeks where we will have this kind of see-saw where hospitalisation increase because numbers are increasing but very quickly the balance will tip in favour of, we’ll say, us and the vaccine.”

Professor Fanning noted that it is always dangerous to make predictions where COVID is concerned but said he expects cases numbers to start falling August.

“We have to keep a watching brief on this virus but nonetheless we have done extraordinarily well in this country and in two or three weeks I expect to see those numbers starting to decrease,” he said.

“COVID has made us all a hostage to fortune in regards to making timeline projections but sometime in August, we will definitely be on top of this as a result of our successful vaccination programme.”

He said that people aged between 19 and 24, where cases are currently rising fastest, are known to be a “very fit healthy group that can handle this infection for the most part.”

The concern now, he said, is about onward transmission to ‘vulnerable vaccinated’ people – who could find themselves at risk of breakthrough cases.

We've over 5.34M vaccines administered with 66% of adults now fully vaccinated & 80% partially. Delta poses a huge risk to this progress but one that we can meet head on. Let's aim to support our healthcare workers having a manageable August. One that they all deserve. @HSELive

This morning HSE Chief Paul Reid said 66% of Irish adults are now fully vaccinated with 80% having received their first dose.

Professor Fanning said there is a high percentage of recovered patients in Ireland who are adding to the level of national immunity against the virus.

Officially Ireland has reported nearly 288,000 confirmed cases throughout the pandemic; however, Professor Fanning said the “well-accepted multiplier” of that would suggest the country has experienced “north of one million” cases to date.