A new Oireachtas report on testing and tracing has said testing should be mandatory for people id...

A new Oireachtas report on testing and tracing has said testing should be mandatory for people identified as contacts of confirmed cases of the coronavirus.

The interim report by the Special Dáil Committee on COVID-19 Response has found that many people are not attending for testing, after being identified as contacts of confirmed cases.

The committee has called on the State to respond "more vigorously" to ensure that being tested in such circumstances is "understood to be a mandatory public health responsibility".

It also says the current testing and tracing system will face 'severe stress tests' in the coming months.

The first is in August, depending on how much travel there is, while the second will be during flu season - as a large number of people with relevant symptoms will be seeking testing at the same time.

As part of 22 recommendations, the committee says anyone entering the country from overseas should be temperature-checked on arrival.

It says they should also be tested at least twice, and that mandatory quarantine on entry should be monitored more closely.

"Quarantine should be enforced so that entrants are required to prove that they are compliant with this public health imperative", the report says.

The committee also recommends that the HSE's target turnaround time for end-to-end testing should be "at most one day."

It says that ensuring a sufficient supply of testing equipment should "remain a priority." 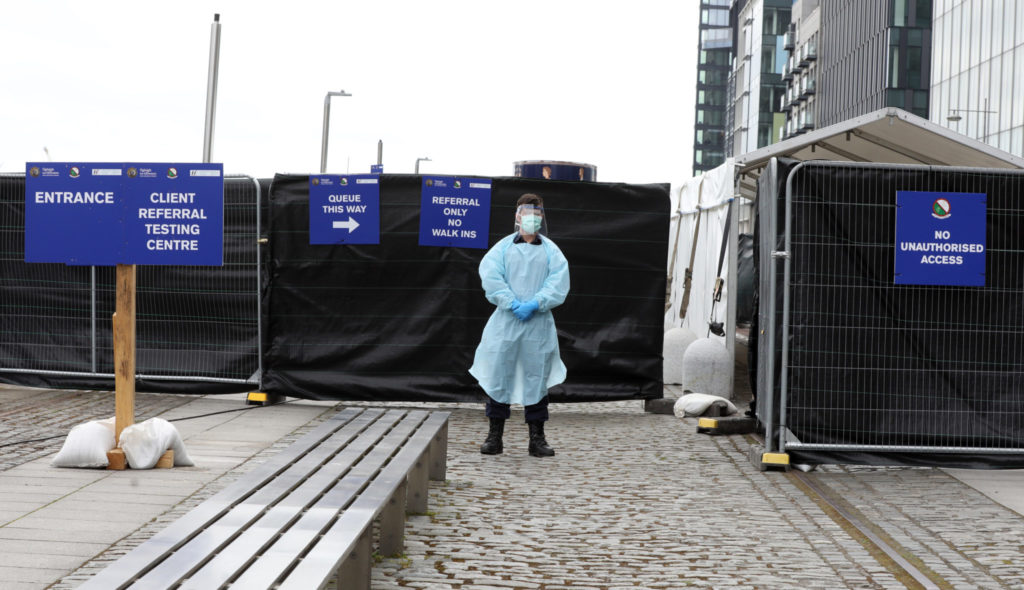 A man dressed in a surgical gown and face mask at a COVID-19 test centre on Sir John Rogerson's Quay, Dublin in April 2020. Picture by: Leah Farrell/RollingNews.ie

While the number of testing experts working needs to be maintained at a sufficient level.

"The detail of the HSE's August test and trace plan will be crucial to public health outcomes," the report says.

"The committee recommends that this plan should include ambitious targets on testing capacity and turnaround times, with matching investment in healthcare facilities, including isolation rooms.

"Implementation through regional specialist networks should be considered for the plan."

And it says the potential for hospital overcrowding is "a serious risk."

On this, the report says limiting hospital crowding needs to be addressed within the test and trace plan - and that any investment to help resolve the issue should be used.

It also says that any COVID-19 acquired in workplaces should be considered a "notifiable occupational illness."

A total of €208m has so far been allocated for testing and tracing capacity.

That figure is set to be re-assessed by the end of August.

The committee is advising a reduced cost in face masks and flu vaccines as this is "likely to improve the effectiveness of public health measures".

It would also like to see the analysis of the COVID Tracker app made public.