The secretary-general of the Department of Health has said the acute phase of the coronavirus cri...

The secretary-general of the Department of Health has said the acute phase of the coronavirus crisis will be measured in 'months and probably years'.

Jim Breslin was speaking at the Special Dáil Committee on the COVID-19 Response.

The chief medical officer and the HSE chief executive are also answering questions on the State response to the virus.

"We have made definite progress in getting virus levels back down through stringent public health restrictions.

"But the social and economic costs of COVID have been huge and will be with us for some time".

He also said the first easing of restrictions, which happened on Monday, were thanks to people's efforts.

"The bedrock of this progress has been the tremendous commitment on the part of citizens and communities to the behaviours necessary to reduce transmission.

"The progress is such that we can now collectively take some calculated risks in extending the range of activities it is permitted to undertake.

"But we need to be aware that we will continue to be in the acute emergency phase of this crisis for some time with further waves and ever-present danger.

"This is not a one, a two or even a three day storm after which we move to a recovery phase.

"The acute phase of this crisis will definitely be measured in months and most probably in years rather than days."

He said the health service has been "tested to the limit", but not overwhelmed.

Ireland is also fourth-highest in the European Union in terms of completed tests - with plans for improved turnaround times.

He added that the HSE is on target this week for a testing capacity of 15,000 tests per day, with an average turnaround time of between one and three days. 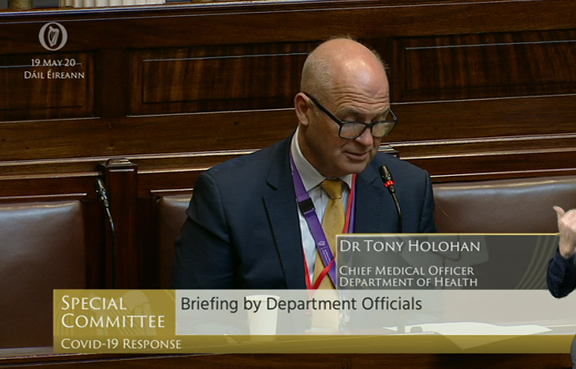 Meanwhile, the Chief Medical Officer Dr Tony Holohan said Government would have to consider the “wider economic, social and other” effects of the lockdown when to move to Phase Two of reopening.

He said he is “acutely conscious of the grief that people have experienced” around the country as result of the virus and insisted that the actions taken by NPHET have “suppressed this infection, protected the health of people in this country and undoubtedly saved lives.”

“NPHET will continue to advise Government to ensure the decisions Government takes are informed by public health considerations, while recognising that the Government will also need to take into account wider economic, social and other considerations as part of the phased unwinding of the restrictions,” he said.

He said there are no plans for industries like construction to be blanket tested, but that they have made progress in reporting.

“People who are subject to testing get negative test results by text,” he said.

“With our positivity rate at the moment at 3%, 97% of people are getting a result in that way.”

Dr Holohan also addressed reports that test results were being given directly to employers, rather than the people getting tested, and said it's a “full stop” breach of their confidentiality if that is happening.