There have been a further 1,620 confirmed cases of COVID-19 in Ireland. Latest figures also show ...

There have been a further 1,620 confirmed cases of COVID-19 in Ireland.

Latest figures also show that 328 patients are hospitalised with the virus, of which 59 are in ICU.

The five-day moving average of cases has risen slightly to 1,414. 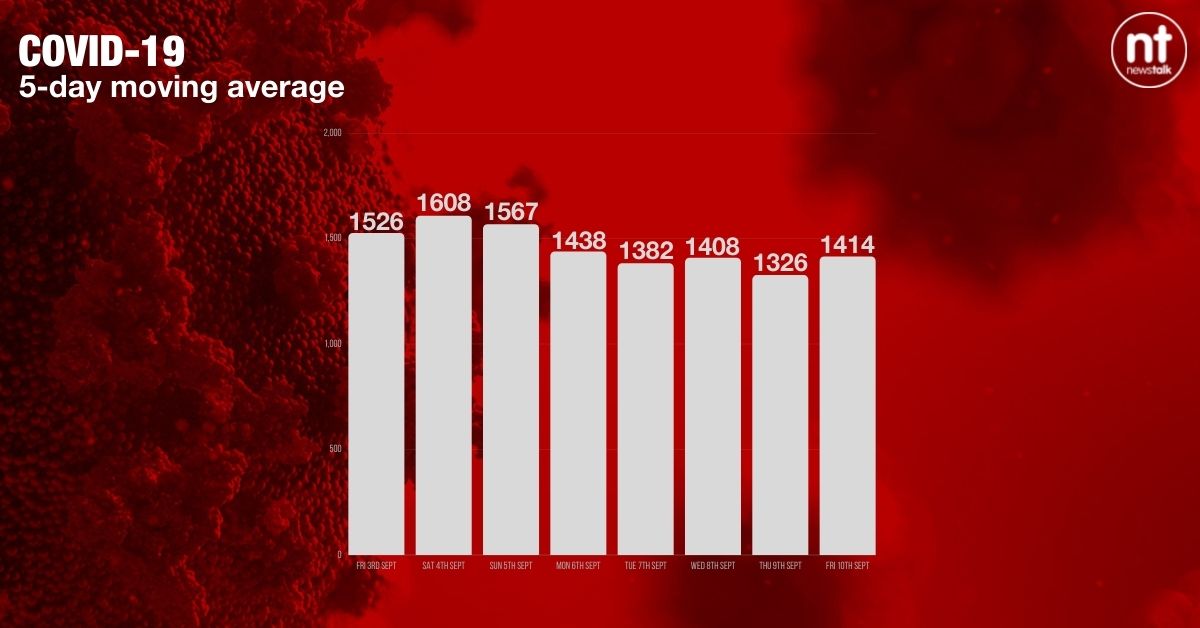 The seven-day average of cases has dropped by over 20% in the past two weeks.

Chair of the NPHET modelling group, Professor Philip Nolan, says it has fallen from 1,784 to 1,421.

He says the number of COVID-19 patients in hospital and Intensive Care have also stabilised.

But he warns that incidence remains high and people need to drive down infection further.

"The coming weeks are our opportunity to drive incidence down and reduce the risk so we can continue the plan to re-open safely", he says in a tweet.

Incidence has decreased over the last 14 days, and numbers in hospital and ICU have stabilised. The 7-day average case count has fallen from 1784 to 1421. But this is still very high. Vaccination is giving us great protection, and making it difficult for the virus to spread …. pic.twitter.com/ww2yL5iRxp

It comes as 90% of the Irish population aged 18 and over have now been fully vaccinated.

While the seven millionth vaccine dose was due to be administered in Ireland on Friday.

Another milestone day in our COVID-19 vaccine programme.

Also important that everyone complete their vaccine schedule. pic.twitter.com/hsdgIdcYES

Ireland has the 15th highest COVID-19 death rate in Europe, despite having the highest case rate.

Data from the European Centre for Disease Control (ECDC) shows Ireland recorded 434 cases for every 100,000 people in the past two weeks.

That is down around 70 on this day last week - however, Ireland remains significantly ahead of the other 29 countries on the list.

None of the other countries are reporting case rates higher than 400 – with Greece coming in second on 380 and Estonia third on 367.