The last decade was the hottest since records began

Last year was the second hottest on record according to the latest report from NASA and the US National Oceanic and Atmospheric Administration.

The assessment of global surface temperatures and climate conditions found the last decade to be the hottest since modern record-keeping began in 1880.

The last five years were also found the be the warmest five-year period on record.

Last year came second only to 2016, when temperatures were boosted by the El Niño weather system, in terms of average global temperatures.

The Arctic is warming more than three times as fast as the globe. Water pooled 💧 on the Greenland Ice Sheet this northern summer as ice melted. When ice on land melts into the ocean, it raises sea levels. pic.twitter.com/JGf9j0ZQz3

“The decade that just ended is clearly the warmest decade on record,” he said. “Every decade since the 1960s clearly has been warmer than the one before.”

NASA said the average global temperature is now just over 1C higher than it was in the late 19th Century. 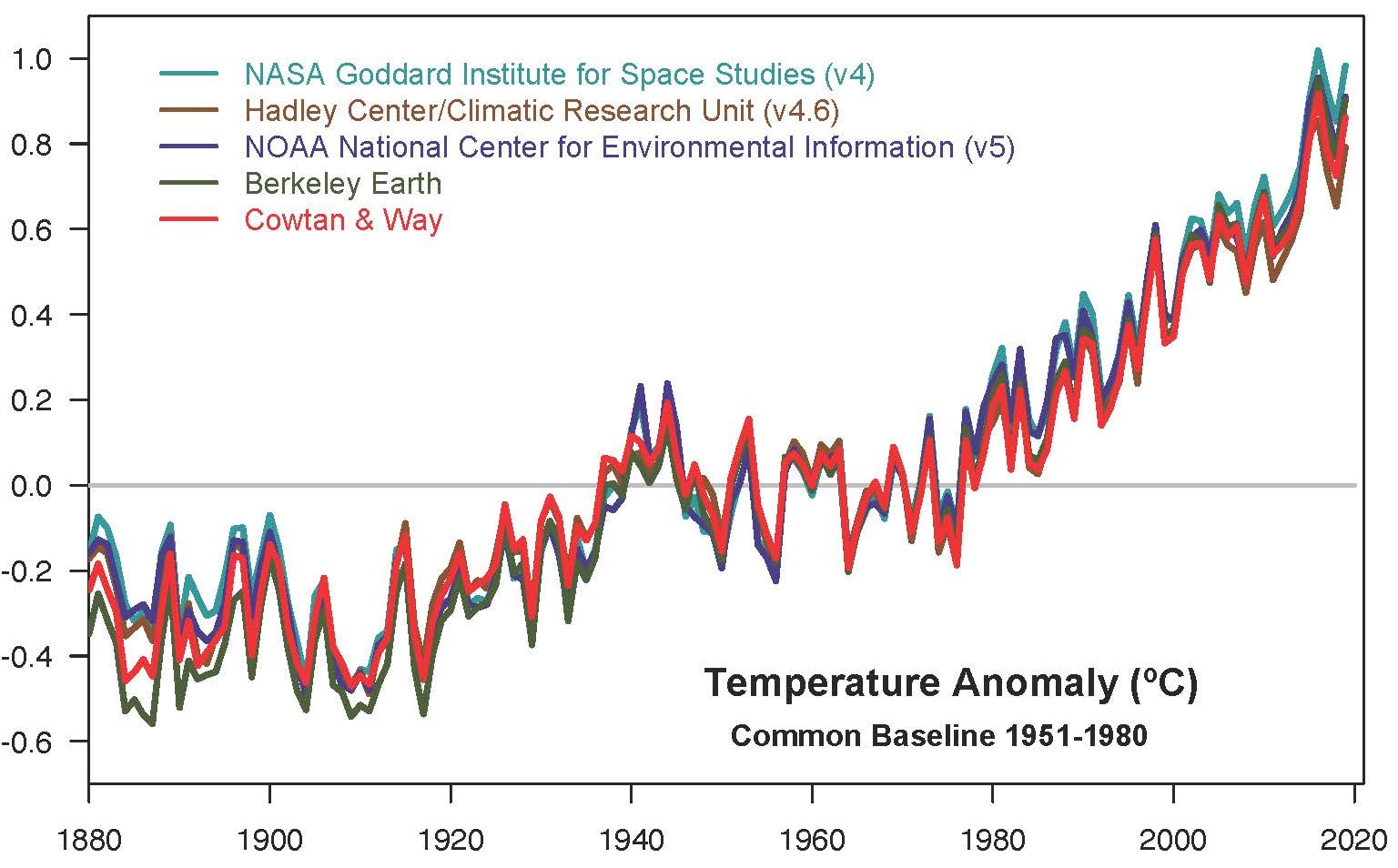 Yearly temperature anomalies from 1880 to 2019, with respect to the 1951-1980 mean, as recorded by NASA, NOAA, the Berkeley Earth research group, the Met Office Hadley Centre (UK), and the Cowtan and Way analysis. Image: NASA GISS/Gavin Schmidt

By using climate models and statistical analysis of the global temperature data, scientists from both agencies found that the temperature increase is mostly driven greenhouse gas emissions produced through human activity.

“We crossed over into more than 2°F warming territory in 2015 and we are unlikely to go back,” said Mr Schmidt.

“This shows that what’s happening is persistent – not a fluke due to some weather phenomenon.

“We know that the long-term trends are being driven by the increasing levels of greenhouse gases in the atmosphere.”

The effects of rising temperatures are felt around the world. Large and intense fires 🔥 burned in Alaska and Siberia and across Australia this year. pic.twitter.com/JIEd9v1hq7

According to the data, The Arctic region has warmed just over three times faster than the rest of the world.

Meanwhile, rising atmospheric temperatures have seen continued loss of mass in Greenland and Antarctica as well as an increase in some extreme events, including heatwaves, wildfires and extreme rainfall.

This decades-long warming trend is the result of increasing greenhouse gases ♨️ in the atmosphere, released by human activities. pic.twitter.com/N85wZGN65j

NASA estimates that the average global temperature change is accurate to 0.1°F with A 95% level of certainty.

Main image shows Earth from one million miles away. The picture was taken by a NASA camera on the Deep Space Climate Observatory satellite,06-07-2015. Image: NASA/Zuma Press/PA Images