Chlamydia and climate change: koalas at risk of extinction from two deadly threats

The koala bear, Australia’s cutest and most iconic mammal, is at risk of extinction in parts of...

Chlamydia and climate change: koalas at risk of extinction from two deadly threats

The koala bear, Australia’s cutest and most iconic mammal, is at risk of extinction in parts of the country because of chlamydia and climate change.

A cross party committee in the New South Wales Parliament has warned that a lethal cocktail of chlamydia, climate change and habitat loss could mean the animals will be extinct in the state by 2050.

Much of the population has become infected with chlamydia - a sexually transmitted infection that humans can also contract. If left untreated in koalas it can cause infertility, blindness and even death.

However, the use of antibiotics to treat the disease is not risk free either. They can cause havoc with the koala’s digestive system and some will even die of starvation after receiving the treatment.

Tragically, the disease can spread very quickly through a local population; Mark Krockenberger, Professor of Veterinary Pathology at the University of Sydney, told CNN that 13 years ago in the small New South Wales town of  Gunnedah only 10% of koalas had chlamydia. By 2015 that figure had risen to 60% and it has recently climbed to 85%.

"If you think about it, that's not a viable population anymore because of infertility,” Professor Krockenberger said.

“Pretty much every female that's infected with chlamydia becomes infertile within a year, maybe two years maximum... Even if they survive, they're not breeding.”

It is a phenomenon seen right across Australia and has led to whole populations becoming infertile.

Around 5,000 koalas are also thought to have died during the catastrophic bushfires that ripped across Australia in the summer of 2019 and 2020 - the extremity of which has been put down to climate change.

Urbanisation is another factor putting the marsupials at risk; as cities encroach on their habitats, koalas increasingly wander onto busy roads or get attacked by dogs. 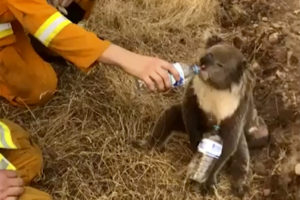 Image: A koala drinks water from a bottle offered to him by a firefighter in Cudlee Creek, South Australia. Picture by: AP/Press Association Images

David Phalen, Professor of Wildlife, Health and Conservation at Sydney University, says koalas are facing the biggest crisis in the history of their species:

"They say 'death by a thousand cuts' and that's what's happening every day.

“More trees are being cut down, more areas are being built up, we're having huge fires and all these things eventually will have major impacts not just on koalas but on all the other animals that live in the same habitat that they do."