The Central Mental Hospital broke its approved capacity of female patients last month because of ...

The Central Mental Hospital broke its approved capacity of female patients last month because of a shortage of space.

Newstalk has learned that the hospital wrote to Mental Health Commission to warn that it was at risk of being breaching privacy regulations as a result.

The issue arose last month after a mother who smothered her child with a pillow was found not guilty by reason of insanity.

At first, the Central Criminal Court heard she couldn't be committed to the Central Mental Hospital (CMH) because the facility had reached its quota of female patients.

On October 25th, the following day, the court was told that there was now a place available.

It has now emerged that Dr Brenda Wright, clinical director of the National Forensic Mental Health Service in the hospital, wrote to the Mental Health Commission that day. 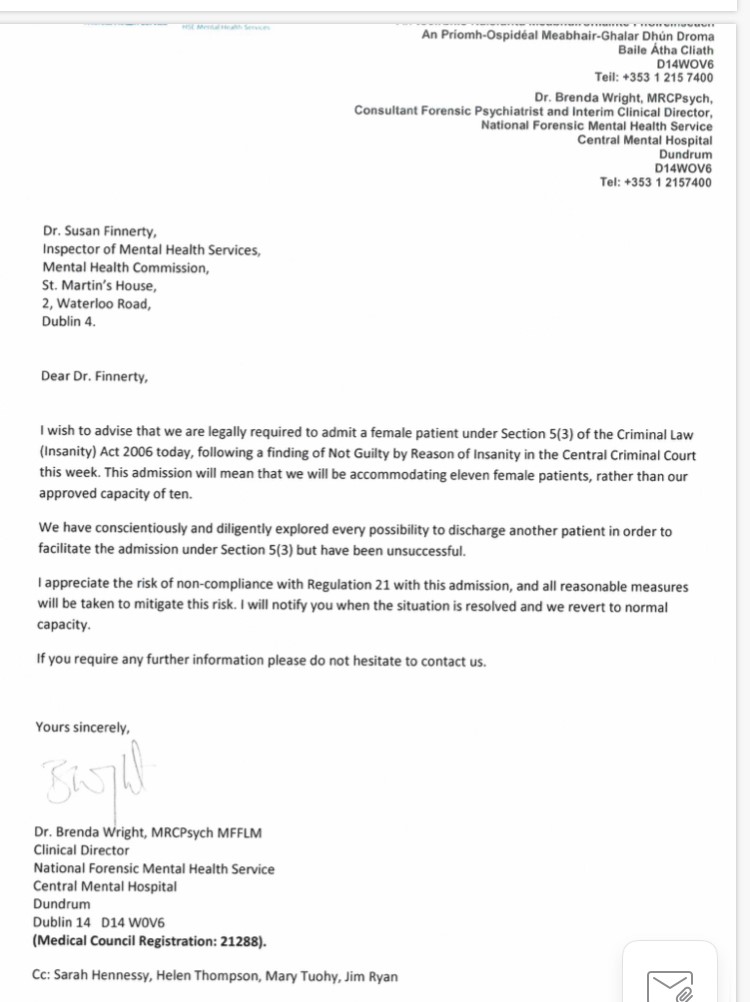 In the letter, released under the Freedom of Information Act, she said the hospital was legally required to admit a female patient who had been found not guilty by reason of insanity in the Central Criminal Court earlier in the week.

Dr Wright said the admission meant the facility would be accommodating 11 female patients – breaching its capacity of 10.

She said the hospital had tried to discharge another patient to facilitate the woman, but that this had been unsuccessful.

The clinical director said the facility were now at risk of being non-compliant with privacy regulations.

It is very concerning that the Central Mental Hospital or any hospital would have to go above its capacity to cater for someone in need of acute care," he said.

“There is a capacity problem at the Central Mental Hospital.

“At the moment, it has a 103 bed capacity but greatly more than this is needed.”

He said there are consistently between 25 and 30 people on the waiting list for transfer from prison to the CMH, “many of them for many months.”

“This is a very difficult situation,” he said.

“Prison is toxic for the mentally ill, so we need more capacity at the Central Mental Hospital.”

The Mental Health Commission said it is satisfied steps were taken to ensure the privacy and dignity of residents in the female unit after the extra admission.