US aircraft maker Boeing has said it supports attempts to temporarily ground its entire 737 Max f...

US aircraft maker Boeing has said it supports attempts to temporarily ground its entire 737 Max fleet.

The planes have already been banned from Irish and European Union airspace, as investigations continue into Sunday's crash in Ethiopia.

All 157 people on board - including Irish engineer Micheál Ryan - were killed.

The crash has led to questions over the safety of the aircraft.

In a statement, Boeing said this decision came after consultation with the US Federal Aviation Administration (FAA), the US National Transportation Safety Board (NTSB), and aviation authorities - as well as customers around the world.

"Boeing has determined  - out of an abundance of caution and in order to reassure the flying public of the aircraft's safety - to recommend to the FAA the temporary suspension of operations of the entire global fleet of 371 737 MAX aircraft."

"On behalf of the entire Boeing team, we extend our deepest sympathies to the families and loved ones of those who have lost their lives in these two tragic accidents," chairman of the Boeing Company Dennis Muilenburg said. 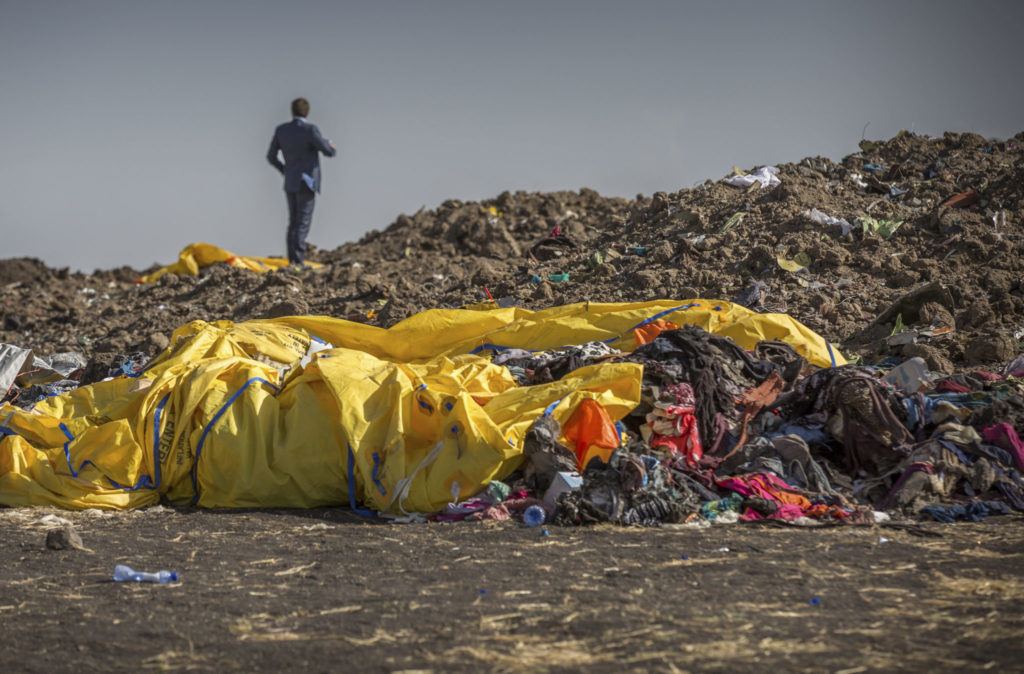 Wreckage lies at the scene where the Ethiopian Airlines Boeing 737 Max 8 crashed shortly after takeoff on Sunday killing all 157 on board, south of Addis Ababa, Ethiopia | Image: Mulugeta Ayene/AP/Press Association Images

"We are supporting this proactive step out of an abundance of caution.

"Safety is a core value at Boeing for as long as we have been building airplanes; and it always will be.

"There is no greater priority for our company and our industry.

"We are doing everything we can to understand the cause of the accidents in partnership with the investigators, deploy safety enhancements and help ensure this does not happen again," Muilenburg added.

It follows US President Donald Trump announcing on Wednesday that the US would be barring the aircraft from its airspace.

Mr Trump said: "We're going to be issuing an emergency order of prohibition to ground all flights of the 737 MAX 8 and the 737 MAX 9 and planes associated with that line."

He said any Boeing currently in the air will go to its destination and then be grounded.

He said pilots and airlines have been notified, and that safety is of "paramount concern".

Mr Trump said the announcement was coordinated with aviation officials in Canada, US carriers and Boeing.