50 years after 13 innocent civilians were shot dead by British soldiers, hundreds of people have ...

50 years after 13 innocent civilians were shot dead by British soldiers, hundreds of people have gathered in Derry to remember the events of Bloody Sunday.

At 9.15am, relatives of the dead set off on a walk of remembrance from the Creggan along the original route taken by their loved ones.

Spectators lined the streets and, as the relatives made their way through the city, a round of applause broke out.

Wreaths were then laid at the Bloody Sunday memorial in the Bogside - with An Taoiseach Micheál Martin among those in attendance.

Today we remember all those who died or were injured as a result of the atrocity on #BloodySunday50, one of the darkest days for this island.

We also pay tribute to the families of the victims, whose dignity and persistence in the search for truth and justice has never wavered. pic.twitter.com/tVLbtxJxnR

Often described as one of the darkest days in the history of the Troubles, what happened on Sunday 30th January 1972 is still an open wound for many in the city. Liam Wray, whose brother Jim was killed that day, told The Anton Savage Show that, even after half a century, the anniversary remains difficult:

“The pain does go away over the years but every anniversary obviously brings back the memories,” Mr Wray said.

“The biggest pain that we feel is that we’ve been campaigning for 50 years to bring those who are responsible for the murder of our relatives into the courts of justice.

“We were hoping that we would get recourse to justice for our dead family members and that hasn’t happened.”

Another victim was 17-year-old Jackie Duddy; his sister, Kay, would like the soldier who killed him to confess:

“Please put your hands up and say ye did it,” she said.

“So we can lay our wee brother to rest. Jackie Duddy’s been buried 50 years but he hasn’t been laid to rest because how can you lay someone to rest without justice?” 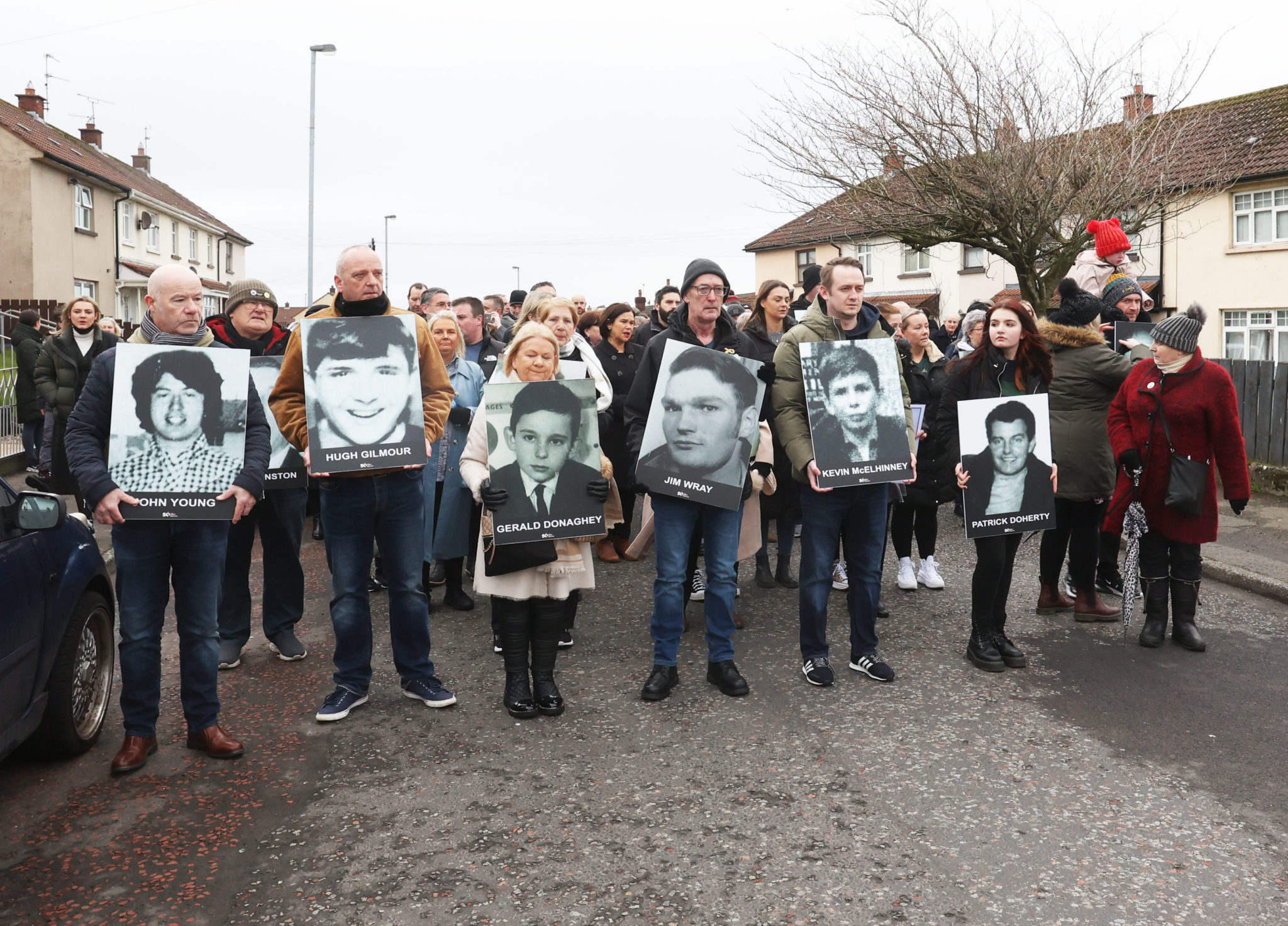 Family members and supporters of the 14 people shot by British Soldiers 50 years ago today, in Derry, during a peaceful demonstration, march from the Creggan to the monument for a wreath laying ceremony. Picture by: Sam Boal/RollingNews.ie

Last year Northern Ireland’s Public Prosecution Service announced that a British soldier, known as Soldier F, would not face trial for the murder of James Wray and William McKinney.

The British Government has also announced plans for an amnesty for all Troubles-era killings and, while delivering the annual Bloody Sunday lecture, former British Labour party leader Jeremy Corbyn said that he was strongly opposed the proposal:

“It’s an outrage that nobody has been prosecuted for the deaths of… innocent civilian protestors,” Mr Corbyn told an audience in Derry on Saturday.

“And it’s a double outrage that the British Government is now planning legislation to make it even harder for such an effort to succeed at any time in the future.”

We were delighted to welcome @jeremycorbyn who gave an outstanding Annual Bloody Sunday Lecture. Minty Thompson and @tonydutchdoc presented @jeremycorbyn with a special ‘You Are Now Entering Free Derry’ plaque which has been emblazoned with the Palestinian colours 🇵🇸 pic.twitter.com/MDwpcgIKk7

“Introducing a statue of limitation for the atrocities that took place in Ireland amounts to nothing short of complicity and covering up the truth.

“And ensures that the lessons are not fully learnt; the amnesty bill passing into law would entrench injustice and actually be an insult to us all.

“We will oppose this bill in the strongest terms we can. It has to be opposed.”

Main image: Bloody Sunday Families March. Family members and supporters of the 14 people shot by British Soldiers 50 years ago today, in Derry, during a peaceful demonstration, march from the Creggan to the monument for a wreath laying ceremony. Picture by: Sam Boal/RollingNews.ie