Bank of Ireland customers are being warned about a bank card scam. A teenager has been arrested a...

Bank of Ireland customers are being warned about a bank card scam.

A teenager has been arrested as part of a Garda investigation into the so-called 'smishing' scam.

The scam sees people receive text messages that suggest their bank cards have been compromised.

Gardaí say the message is "inserted into a message thread previously issued by the bank, therefore appearing to be a legitimate warning".

The customer is then asked to follow a link to a fake Bank of Ireland website, and asked to insert card and account details to order a new card. 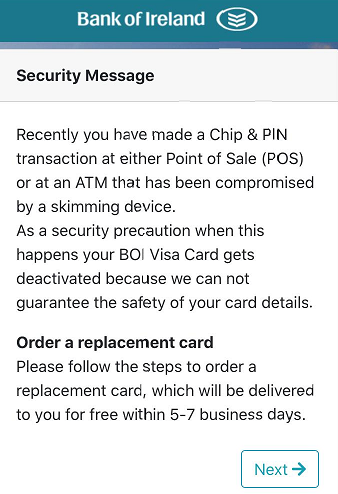 Example of the scam

They're also asked to cut their card in a specific way and send to it a given address.

Once the scammer receives the information, they can access the customer’s account, make withdrawals and make online purchases.

Gardaí and the bank are urging people not to respond or give away details like PIN numbers or passwords.

They're instead asking people to take a screenshot of the scam message and contact gardaí.

Bank cards were found during one of the searches, and are now being returned to their owners.

A teenager was arrested and is being detained at Tallaght Garda Station.