Almost game over for dog who ate Nintendo game cartridge

A dog in Scotland was rushed for emergency surgery, when vets discovered he had swallowed a Ninte...

Almost game over for dog who ate Nintendo game cartridge

A dog in Scotland was rushed for emergency surgery, when vets discovered he had swallowed a Nintendo DS game.

The owners of Rocco, a Staffordshire Bull Terrier cross, knew something was wrong when the four-year-old pooch started vomiting and refused to eat.

When his condition did not improve, Sean Johnston made an emergency visit to Glasgow's Shamrock Street Pet Hospital.

Rocco was admitted immediately and vets were stunned when x-rays revealed a rectangular shaped object in his gut.

After taking him into surgery to remove the potentially fatal object, they retrieved the video game cartridge lodged in his small intestine.

Owner Sean said: "He wasn't acting himself at all and we were worried he' d eaten a corn on the cob, but we were so shocked when the vet said it was from a video game.

"We don't own a Nintendo or anything like that so we're baffled as to where he got it from. 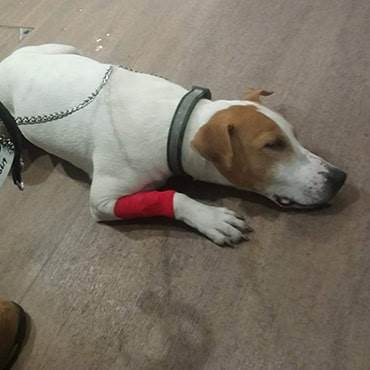 Rocco in recovery after his surgery | Image: PDSA

"He's a rescue dog and we've only had him for about six months so the only thing we can think is that it was from his previous owners - who knows how long it's been in there".

Left untreated, the cartridge could have caused a fatal blockage.

But a surgeon was able to carry out the successful operation that same day - and after an overnight stay to keep a close eye on his recovery, Rocco was discharged the following day for rest and recovery.

Senior vet with the PDSA, Susan Hermit, said: "We see dogs that eat strange things all the time but none of us had ever seen anything like this.

"Objects can sometimes sit in the stomach for a while, but they cause problems when they try and push through the guts, which are much narrower.

"It was a good job Sean brought Rocco in when he did, as an object of this size trying to pass through the guts could have caused a deadly blockage or pierced his internal organs."

Man shot while out walking in Tallaght remains in critical condition