Ads promoting a united Ireland referendum appear in US newspapers

Adverts promoting a referendum on a united Ireland have been published in a number of US newspape...

Ads promoting a united Ireland referendum appear in US newspapers

Adverts promoting a referendum on a united Ireland have been published in a number of US newspapers.

The 'Friends of Sinn Féin' group has organised the pieces in The New York Times and Washington Post.

They have been supported by a number of Irish-American organisations.

The ads call for a date to be set for a referendum on a united Ireland.

The half-page ads say the Good Friday Agreement "replaced conflict and violence with a peaceful and democratic pathway to a united Ireland."

They say the unionist electoral majority in the North "is gone" and that "a new Ireland is emerging".

"A new Ireland that is seeking to undo the damage of the undemocratic position of Ireland 100 years ago and the recent British government imposed Brexit".

"We appeal to the Irish Government to promote and plan for unity", they say. 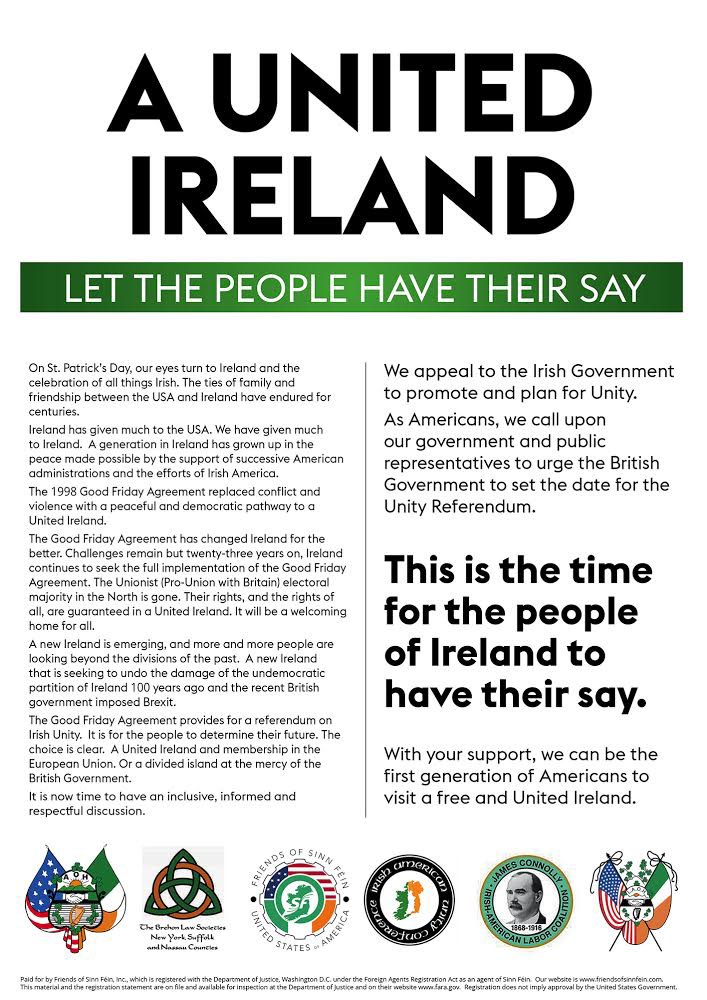 The advert was placed in US publications by the Friends of Sinn Féin group. Image via @FOSFUSA on Twitter

They also call on the US administration to "urge the British government to set the date for the unity referendum.

"This is the time for the people of Ireland to have their say".

Last month, Former Taoiseach Bertie Ahern said a border poll on a united Ireland should be held to coincide with the 30th anniversary of the Good Friday Agreement.

He said rather than forcing one in the short-term, the right time to have a vote would be 2028.

"It was an absolute understanding, to bring republicans and nationalists on-side, that somewhere in the future there would be a poll", he said.

"That aspiration has to be there, and it has to be fulfilled on some day".

While in January, a poll carried out for Britain's Sunday Times found that 51% of 2,392 people surveyed in Northern Ireland supported a referendum in the next five years.

Some 44% of people were opposed and 5% had no opinion.

It also found that 47% of Northern Ireland voters would be 'pleased' at a united Ireland, 47% would be 'upset' and 4% were 'not bothered'.

In contrast, a majority of those polled in both England and Scotland said they would be 'not bothered' at such a result.

Main image: The advert that was placed in US publications by the Friends of Sinn Féin group. Image via @FOSFUSA on Twitter