The Bulgarian Foreign Affairs Ministry says a lorry, in which 39 people were found dead in the UK...

The Bulgarian Foreign Affairs Ministry says a lorry, in which 39 people were found dead in the UK, was registered in Bulgaria by a company owned by an Irish citizen.

A man from Northern Ireland has been arrested after the bodies were found dead in a lorry container in Essex.

Police were called to the Waterglade Industrial Park in the early hours of Wednesday morning.

Emergency services arrived at around 1.40am - however, all 39 people were pronounced dead at the scene.

Essex Police believe there are 38 adults and one teenager among the dead.

Originally, police reported that the lorry had travelled into the UK through Holyhead on Saturday.

But after further enquiries, they believe that the trailer travelled from Zeebrugge, Belgium into Purfleet, Essex and docked shortly after 12:30am on Wednesday morning.

The tractor unit of the lorry is believed to have originated in Northern Ireland.

Police believe the lorry and trailer left the port shortly after 1.05am.

The driver of the lorry, a 25-year-old man from Northern Ireland, remains in custody having been arrested on suspicion of murder.

Essex Police say: "This will be a lengthy and complex investigation and we continue to work with local partners and international authorities to gather vital intelligence and identify those who have sadly died.

"Anyone who has any information about this incident can submit information to the UK Police Major Incident Public Reporting site".

The vehicle is believed to have come from Bulgaria.

In a statement, Bulgaria's Foreign Affairs Ministry says: "The Bulgarian embassy in London has received information from the British police that the truck in which 39 people were found dead in Essex is registered in Bulgaria.

"The Scania truck was registered in Varna under the name of a company owned by an Irish citizen.

"The driver of the truck is from Northern Ireland, UK, has been arrested and is being questioned on the case by the British police. 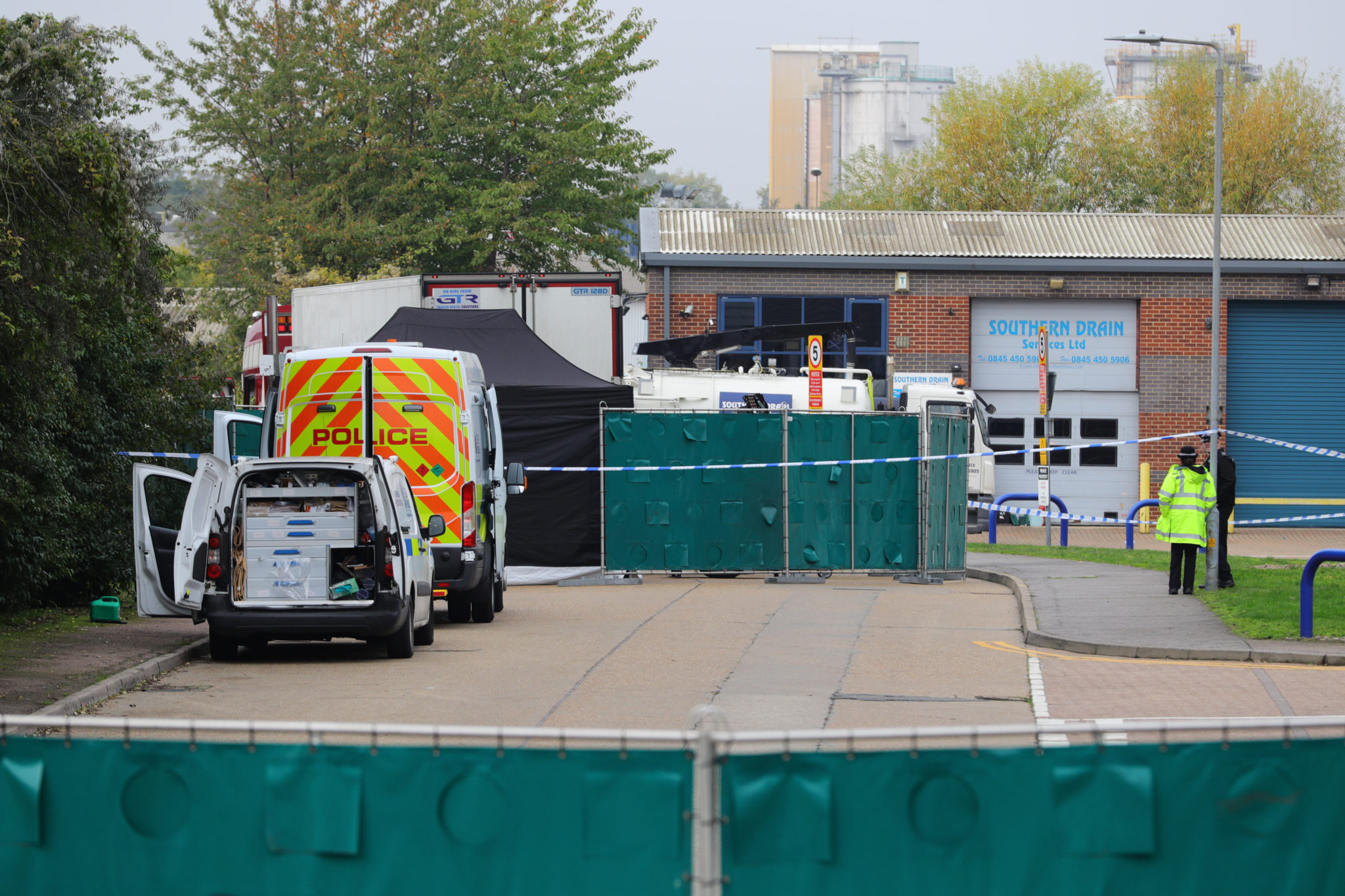 UK Police at the scene in Essex after 39 bodies were found inside a lorry container at the Waterglade Industrial Park, 23-10-2019. Image: Stefan Rousseau/PA Wire/PA Images

"The truck was found earlier this morning in a parking lot in the British city of Grays.

"The bodies of 38 adults and a teenager have not yet been identified, but police said that it is highly unlikely that they are Bulgarians.

"Our embassy in London is in contact with the British police who are investigating and is fully cooperating on the case."

Amnesty Ireland has called the discovery "heartbreaking and horrifying."

It says: "People who are forced to take dangerous journeys to reach Europe, in this case the UK, often do so because current immigration policies deny them safe and legal options.

"Our thoughts are with families and friends of those affected." 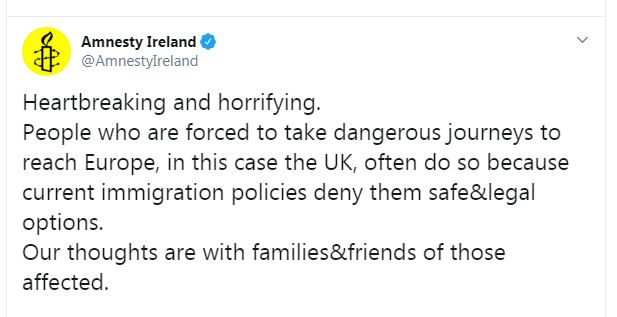 Essex Police Chief Superintendent Andrew Mariner says: "This is a tragic incident where a large number of people have lost their lives. Our enquiries are ongoing to establish what has happened.

"We are in the process of identifying the victims, however I anticipate that this could be a lengthy process.

"We believe the lorry is from Bulgaria and entered the country at Holyhead on Saturday 19 October and we are working closely with our partners to investigate. We have arrested the lorry driver in connection with the incident who remains in police custody as our enquiries continue."

Police are appealing for anyone with information to get in touch with them, and have put a cordon in place and access to and from the industrial park is closed.

Mr Mariner adds: "I appreciate this cordon is going to disrupt the activity of local businesses in the area and we will work to ensure that disruption is kept as short as possible. We are working with Thurrock Council to mitigate against any impact our investigation scene will have locally." 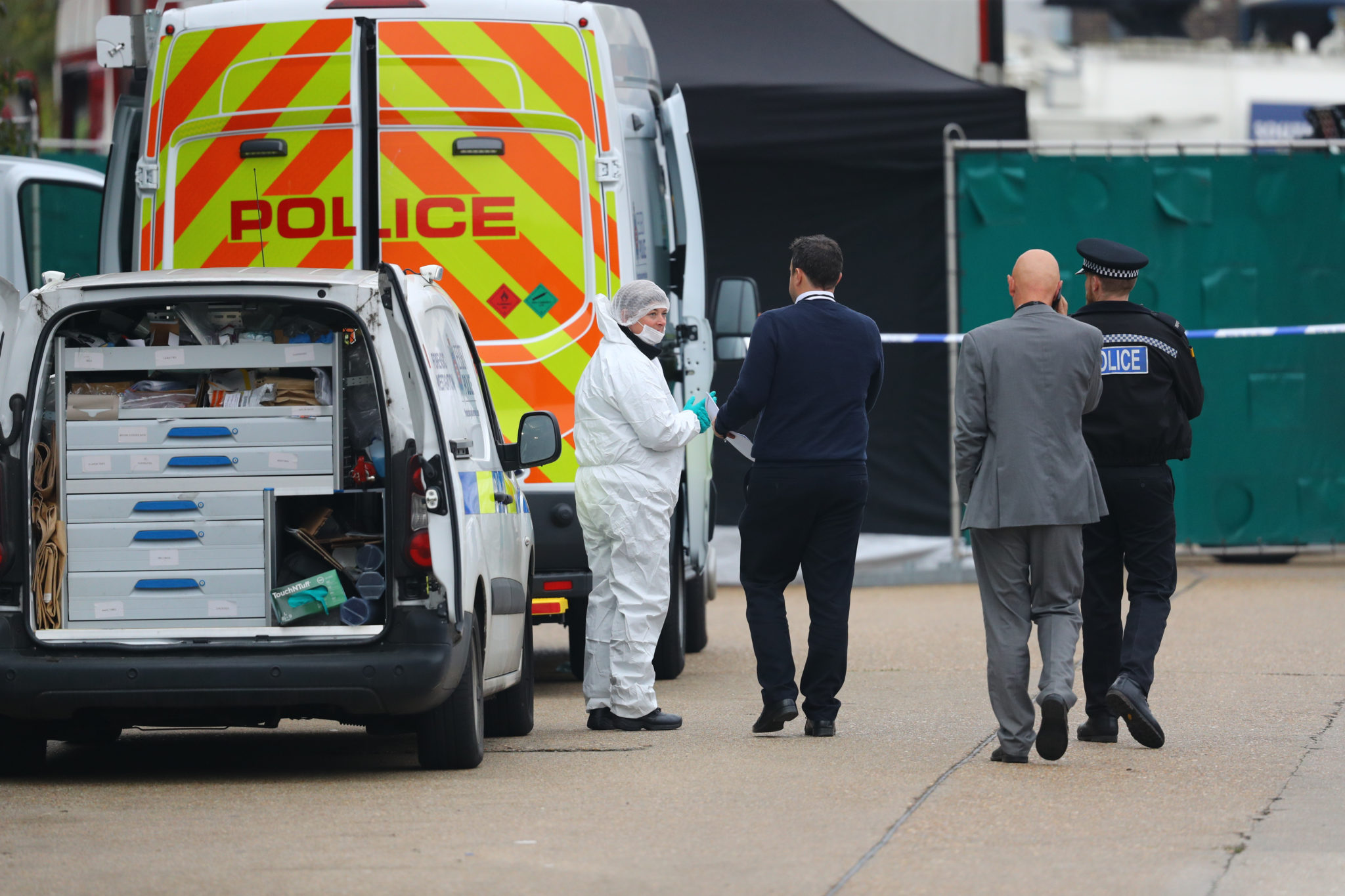 UK Police at the scene in Essex after 39 bodies were found inside a lorry container at the Waterglade Industrial Park, 23-10-2019. Image: Stefan Rousseau/PA Wire/PA Images

She said the lorry’s route into the UK will be a “key line of inquiry” for police.

“This is an absolutely tragedy and a very sad day for Essex Police and the local community,” she said.

“We will continue to work alongside many other partner agencies to find out what led to these deaths.”

Officers from the UK's National Crime Agency have been deployed to assist police with the investigation, and three Red Cross emergency support vehicles were also seen heading into the site.

The PSNI says it is also supporting Essex Police "in its investigation into the murder of 39 people.”

The industrial park is made up of courier and logistics companies.