There have been 2,018 outbreaks of COVID-19 in private homes, data from the Health Protection Su...

There have been 2,018 outbreaks of COVID-19 in private homes, data from the Health Protection Surveillance Centre (HPSC) shows.

There were 122 outbreaks in houses nationwide last week alone.

The figures, reported up to midnight on Saturday, show that there have been a total of 2,878 outbreaks reported nationwide.

85 outbreaks of the virus have been reported in workplaces, including six last week.

Of these cases, 44 concerned outbreaks in food or beverage related industries, of which 31 were in meat or poultry processing plants, and five were in mushroom farms.

The data shows that there were 1,877 laboratory confirmed cases linked to outbreaks, 49 of which required people to be hospitalised. 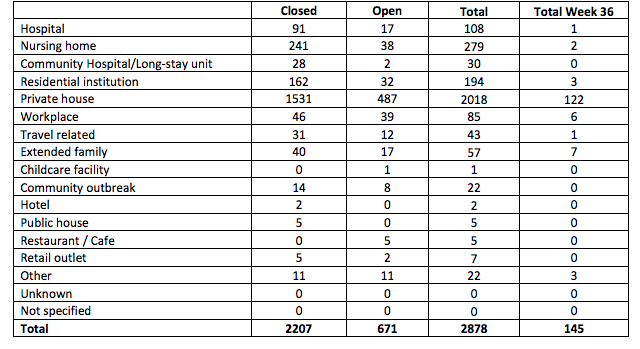 The number of COVID-19 outbreaks notified in Ireland by outbreak setting and by closure status, up to midnight on Saturday. Data: HSPC

The HPSC figures also show that there were 279 COVID-19 outbreaks reported in nursing homes to date, including two last week.

As of midnight on Sunday, 194 clusters were recorded in residential institutions, 108 in hospitals, and 30 in community hospitals or long-stay units.

43 outbreaks were related to travel, five were in pubs, two were hotels and one was in a childcare facility.

One was a general outbreak in a homeless facility and one was an extended family outbreak in the Traveller community.

Overall, there have been a total of six deaths among vulnerable groups.

506 cases have been reported among those vulnerable groups, which includes the Roma community, Traveller community, people in Direct Provision Centres or homeless facilities, and prisons.

It comes as 307 coronavirus cases were confirmed in Ireland yesterday, the highest number in a single day in four months.