Dundalk manager Vinny Perth said a part of him dreamed of joining the Ireland coaching staff. The...

Dundalk manager Vinny Perth said a part of him dreamed of joining the Ireland coaching staff.

The former League of Ireland midfielder had been assistant to Stephen Kenny during the club's successful era domestically and in Europe.

Last Autumn, Kenny was announced as Ireland Under-21 manager and senior boss from 2020.

However, Perth was not made part of his coaching staff and instead made the step up to become Dundalk head coach.

The 42-year-old joined us on the Football Show to discuss his current role and Ireland matters.

Perth touched on why he didn't ultimately follow Kenny into the Ireland set-up.

"I felt that and probably still feel that we were a very good team together," he said.

"Stephen made it clear"

"And what he brought to me helped me be a brilliant coach. So I just believe we were a great team together.

"But I wasn't presumptuous in any way shape or form. But very early in the conversation, Stephen made it clear that it just wasn't going to happen for various reasons.

"So I knew where I stood very clearly at that stage. Naturally, I would have been disappointed at the time because I would have had the same ambitions as Stephen.

"In my position, I feel that over the last 5-6 seasons, I would've played a certain role in terms of Dundalk's success. 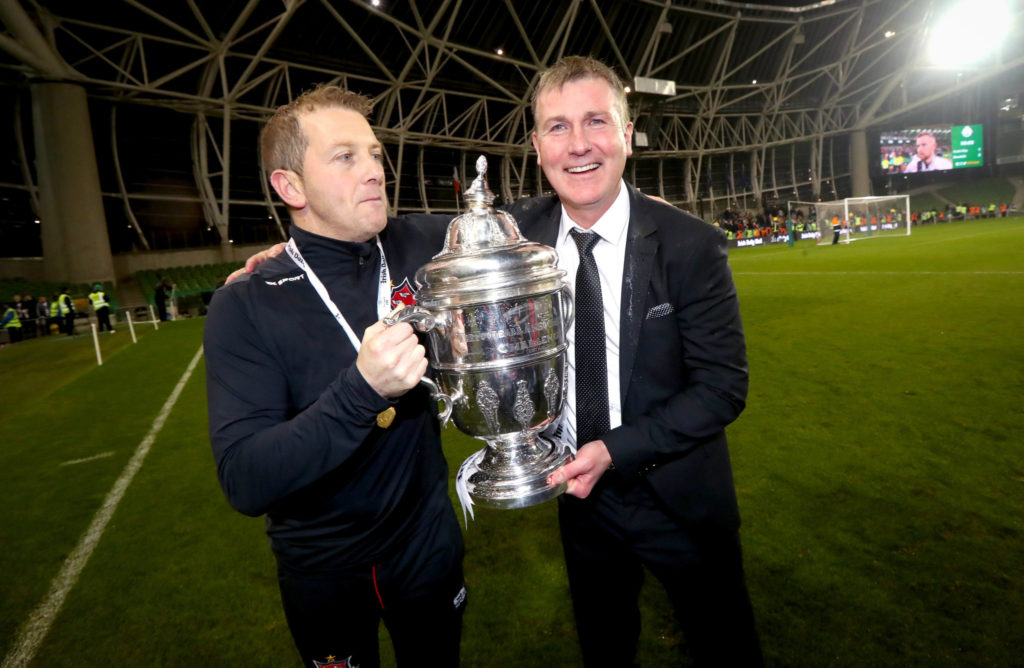 "Stephen has got the job off the back of Dundalk's success so yeah I was disappointed. But at the same time, it was very clear to me within an hour of that conversation that I'd had contact from America (Dundalk's owners) to say, 'We want you very central to everything that's going forward for Dundalk. That was a huge vote of confidence."

He added that "it would have cost the FAI a bit of money to" prise him from his Dundalk contract.

"So I understood the situation," said Perth. "For me I moved on fairly quickly. But it'd be wrong to say I wasn't disappointed. I felt I had done enough to be part of that next move as well."

But he also spoke about the dreams he's always had of lining out for Ireland in some capacity.

"You always dream. When there was talk of Stephen Kenny becoming next manager, I dreamed of becoming the next... and I probably wouldn't have got the assistant manager's role, that would have been somebody with a bigger name. But I did have visions of standing at a European Championship. I did have visions of going to a World Cup with him and I'd be telling lies if I said that wasn't what I dreamed or what I thought of," said Perth.

But he also added that he "didn't feel let down". And he went on to say that he still has a very strong relationship with Kenny. And in the full interview that you can watch above, he also talked about his plans for Dundalk.

Johnny Ward's League of Ireland Team of the Decade