Vera Pauw has criticised UEFA over its Covid-19 testing procedures which have delayed her team se...

Vera Pauw has criticised UEFA over its Covid-19 testing procedures which have delayed her team selection ahead of Tuesday's clash with Germany.

The Republic of Ireland manager explained at her press conference ahead of the must-win Euro 2022 qualifier that after the squad was tested on Sunday morning, the results had to be sent to a UEFA-approved laboratory in London.

The results travelled to the English capital via Belfast and Birmingham and it is understood that the results will not be revealed to the FAI until late afternoon on Monday, after the scheduled final pre-match training session, by which time Pauw would normally know her starting team.

"This is unacceptable. It's UEFA guidelines. UEFA has certain labs, I do understand that, but it's not as if Ireland does not have labs and does not have very, very high qualified labs," said Pauw.

The FAI have conducted their own tests on the players before they came into camp last week and again last Monday and Sunday.

As with all UEFA sanctioned matches, there must be UEFA-approved tests conducted before the games which the German squad was able to get done before they left for Dublin.

"I do understand that UEFA needs to structure it but why do Germany have their results already and why do we need to wait until after our last training session?

"I think that this is something that UEFA really have to sort out. I usually never press for this but I find this unacceptable."

Today's training session has been delayed in the hope that the results will be available before the players take to the pitch. 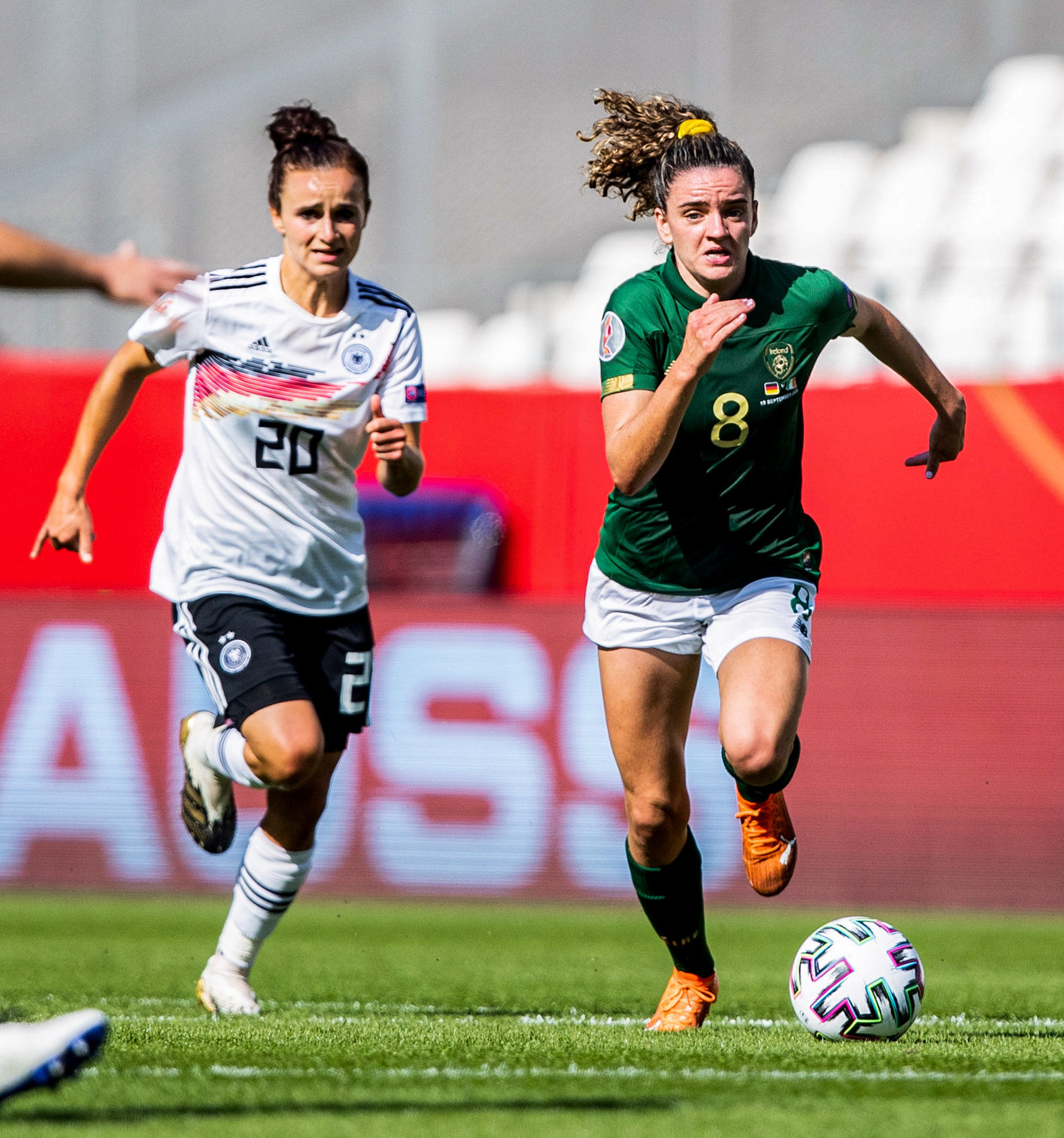 19 September 2020; Leanne Kiernan of Republic of Ireland in action against Lina Magull of Germany during the UEFA Women's 2021 European Championships Qualifier Group I match between Germany and Republic of Ireland at Stadion Essen in Essen, Germany. Photo by Marcel Kusch/Sportsfile

There was one piece of disappointing news on the injury front with Leanne Kiernan ruled out with a hamstring injury.

The West Ham United striker was allowed to leave the camp on Sunday with Pauw explaining why they could not take a risk, even with such a huge challenge facing the team on Tuesday night.

"It's not yet a big injury. We are sure that if we played her, we could destroy her career because then it could rupture and she would have a scar on her hamstring for the rest of her career," said Pauw.

"I'm not a coach who would take those kinds of risks with players. I see myself as a help for players to raise them above their level but not to use and abuse players for my own good.

"So we have dismissed her from camp because the risk is far too big to play her, even in a game like this. Even if it was a World Cup final, I would not have played her."

Kiernan joins Megan Campbell on the list of absentees, with the Manchester City out after picking up a knock last week.