The Reds' lost key forwards Jean Kleyn, Dave Kilcoyne and RG Snyman to injury in their 27-25 defeat to Leinster two weeks ago and booked their place in the last-four with a 49-12 win against Connacht last Sunday.

"We're in great condition," Rowntree said of the team when asked about the five-day turnaround before facing Leinster in the playoffs.

" We've no fresh injuries and are we're in good nick. We put a bank of training in this summer when mindful about what we were coming back into. The lads have recovered well.

"From what I've seen, and the data backs it up, they're in good shape. We're attacking and challenging teams and sticking to the plan in terms of how we want to play.

"The quick turnaround is irrelevant really because we're match hardened now. We've played two good games and we're ready for another one on Friday night. We're battle ready for this game." 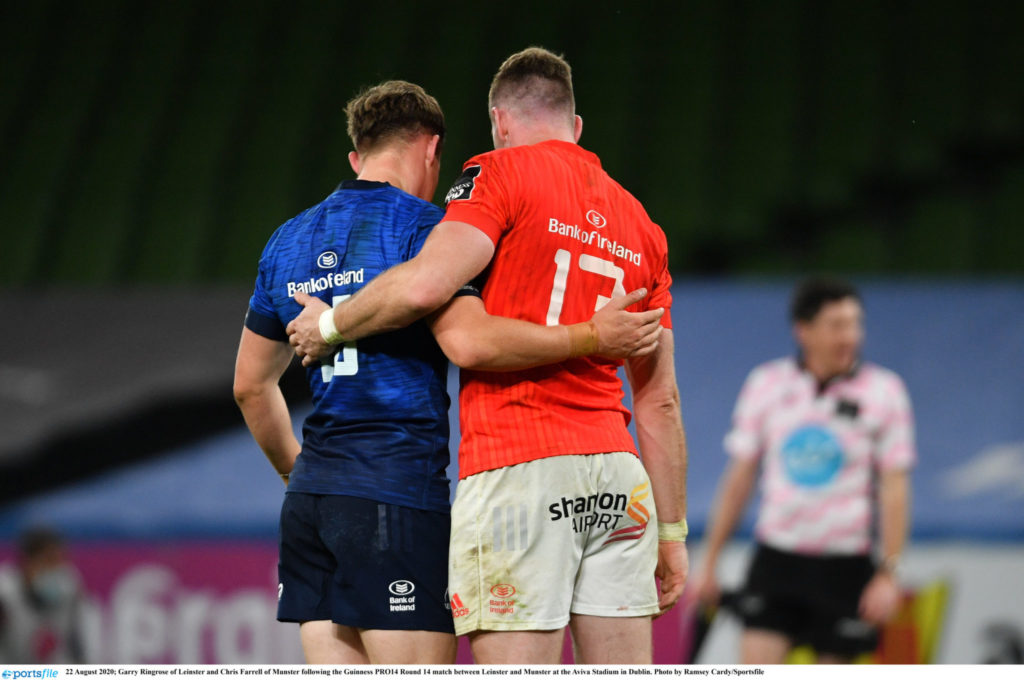 22 August 2020; Garry Ringrose of Leinster and Chris Farrell of Munster following the Guinness PRO14 Round 14 match between Leinster and Munster at the Aviva Stadium in Dublin. Photo by Ramsey Cardy/Sportsfile

Munster have lost to Leinster at the semi-final stage of the PRO14 in the last two seasons but Rowntree says their record against their rivals is little significance heading into Friday evening's clash at the Aviva Stadium.

"The game last month was a proper game, wasn't it? That was our first hit-out since playing the Scarlets, we'd had no warm-up or internal game because we had a challenging 10-days heading into the return of rugby.

"We could have won that game (against Leinster) and were gutted not to win it. There were plenty of positives and it's given us momentum. We've got momentum and a settled team, as settled as it can be after two games.

"The lads are match ready and hardened, we were mindful coming back after lockdown about body hardness and contact but what they have shown is that they're contact ready.

"We're ready and I feel like we're peaking at the right time and we're ready for knock-out rugby."

Ireland could host a quarter of Euro 2028 games | reports