Tanks and music in Russia

The June bank holiday has long been seen as the official start of the summer holidays, especially...

Tanks and music in Russia

The June bank holiday has long been seen as the official start of the summer holidays, especially for those secondary school students who will be free from the classroom for the next three months. The result of an agrarian past this extended break was designed so that extra little hands would be free to help around the farm during the busiest and most important season. This didn’t mean that education stopped, however, and the long summer days saw the world turned into a classroom as children learned about nature, farming, and the working of the world around them.

The summer holidays are still seen by many as a learning opportunity and children are sent off in their droves to hone various skills in camps around the country.  With lessons to be found everywhere even the home or car can become a classroom. Join ‘Talking History’ this Sunday at the usual time of 7pm as we revise two of our favourite and most enlightening shows from the past year.

The Battle of Kursk, 7pm 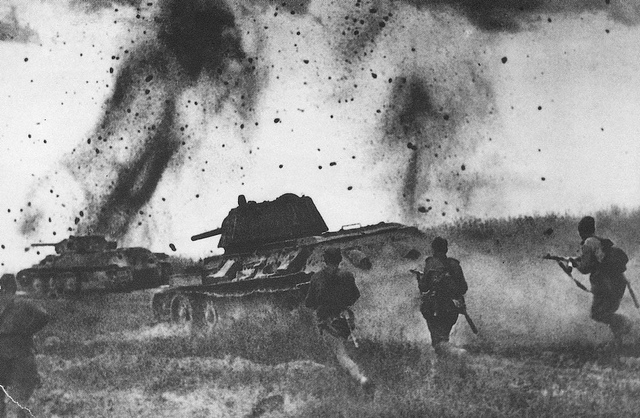 The summer holidays 73 years ago were quite different from today. At the end of June 1941 Nazi Germany invaded Soviet Russia, beginning a new phase of the Second World War. Called Operation Barbarossa this invasion had initially been scheduled to start on the 15th of May. Delays soon set in, however, as Germany was forced to send troops to quell an uprising in Yugoslavia and support their Italian allies in Albania.

Though many of his advisors spoke against going into Russia, especially so late in the year, Hitler pushed ahead with Operation Barbarossa. This invasion would prove the downfall of the Third Reich as it awoke the Russian Army who would eventually raise the red flag over Berlin. Though the impact of the delay of Operation Barbarossa has been hotly contested by historians there has been little doubt of the importance on the Battle of Kursk.

A Tiger I and StuG III with infantry at Kursk

Early July 1942 saw the largest tank battle in history as Germany’s infamous panzer brigades attempted to break through the Russian lines and cut off the Soviet troops in the Kursk salient. The following days would see waves of German assaults crash against the deep Russian defences. Hitler finally called a halt to the attack after nine days of battle. This was the first time a German offensive had failed to achieve its objectives, yet worse was to come as the massed Russia reserves were unleashed on the exhausted Wehrmacht.

Join Patrick this Sunday at 7pm as ‘Talking History’ looks back on ‘Talking History’s discussion on the Battle of Kursk. What exactly happened at Kursk? Why did Hitler go on the offensive? Why was Germany beaten? And what was the lasting impact of this engagement?

We are going to keep our eyes turned east for the second hour of this Sunday’s ‘Talking History’ as Patrick revisits our show on one of Russia’s leading composers, Sergei Rachmaninoff.

Born in 1873 to an aristocratic family in decline Rachmaninoff was poised to see and understand one of the most revolutionary times in Russian history. Financial mismanagement and poor gambling by his father saw the Rachmaninoffs tumble from their place of comfortable affluence during Sergei’s youth. At ten years of age Sergei’s family had split up and he had joined the surging masses flocking to Russia’s growing cities in the wake of the Russian Industrial Revolution.

Unlike the droves of economic migrants Sergei had joined urban society to learn music at the Saint Petersburg Conservatory. His education here and later at the Moscow Conservatory exposed Sergei to the established and growing powers in Russia. More than this, however, his education exposed the young Sergei to Russia’s new artistic trends. This was especially true of his time at Moscow where he became close with the great composer Tchaikovsky.

Rachmaninoff playing his own 'Prelude in C sharp major', which he composed at the age of 19 in 1892

While Rachmaninoff’s early work would reflect the strong influence of Tchaikovsky and others he soon began to develop his own distinctive style. This style drew strongly on the liturgical chanting resplendent throughout the services of the Russian Orthodox Church and established Rachmaninoff as a leading figure in the world of music. Belonging to the aristocracy had not only ensured a good start in life for Rachmaninoff it also immersed him in a society which fuelled the flourishing of his musical style.

This privileged position quickly became a burden and a liability after the Russian revolutions of 1917. As the Soviets seized power Rachmaninoff and his family fled to Finland on an open sled. As a member of the bourgeoisie Rachmaninoff was a natural target of the communist revolutionaries and he was forced to leave everything behind in his flight from his homeland. In the following years Rachmaninoff made his way to America where he established himself as a significant composed and figure in the musical world.

Though he would never return to Russia his heart remained in the land and way of life he had left behind. As the 20th century moved on Rachmaninoff became a beacon for the Russian émigré population and a link to pre-revolutionary Russia as he immortalised a now lost world in his music. Though his style changed and evolved Rachmaninoff remained very much a pre-revolutionary composer.

This Sunday at 8pm Patrick revisits our show on the great Russian composer Sergei Rachmaninoff. Join us as we trace his path through the world and the tale his music tells. Journey from pre-revolutionary Russia to inter-war America as our panel sketches out Rachmaninoff’s life and the world he inhabited.