Ireland has claims on your ancient race, it is the only country that I know of unsullied by any one act of persecution of the Jews – Daniel O’Connell

Throughout history the Jewish people have been persecuted for their faith and ethnicity. Across the ancient world they were targeted by mobs and various rulers for their distinct cultural identity. With the rise of Christianity the anti-Semitism that already existed in Europe became more religiously focused as religious figures began to blame them for the death of Jesus Christ.

Though laws targeting Jews had existed before now this new wave of anti-Semitism saw states introduce legislation that specifically targeted the religious practice of Judaism and their interactions with Christians. Beginning in the 3rd century these laws became more and more restrictive as time marched on until Jews became second class citizens in almost every corner of Europe.

The mistreatment of Jews wasn’t uniform, however, and throughout history some states have distinguished themselves as safe havens for the sons of Abraham; at least relative to their neighbours. While the Netherlands was probably the most famous of these tolerant lands there were many other regions across Europe that welcomed Jews into their boarders, though some more consistently than others.

A sketch of Leopold Bloom found in James Joyce's notes, circa 1941

Despite its relative isolation, or perhaps because of it, Ireland proved to be one of the European nations most tolerant toward Jews through history. Though James Joyce quips that the reason Ireland never persecuted the Jews is because she never let them in, there is in fact a strong history of Judaism in Ireland and through the centuries many members of the Hebrew faith have played important roles in the history of the island.

In 1169 Richard de Clare, more commonly known as Strongbow, led the first Norman invasion of Ireland. Arriving at the invitation of Diarmaid Mac Murchadha, the dispossessed King of Leinster, Strongbow began a new age of Anglo-Irish relations that would see Henry II and subsequent rulers of England extend control over Ireland for centuries to come. A lowly lord who had fallen out of royal favour Strongbow needed funding for his infamous venture; funding that seems to have come, at least partially, from Josce Jew of Gloucester.

By the following century there was an established Jewish community in Ireland, though probably confined to the Pale. Though it is unclear if Edward I’s Edict of Expulsion in 1290 was as effective at ejecting the Jews from Ireland as it was in England, by the 15th century Ireland’s Jewish population was once again on the rise. The persecution and expulsion of Jews and conversos in Spain and Portugal feed this growing population, especially along Ireland’s southern coast, and in 1555 William Annyas from this immigrant community was elected as Mayor of Youghal, Co Cork.

A Jewish wedding in a Waterford courthouse, 1901

Restrictive religious laws had banned Jews from owning land across much of Europe during the Middle Ages. At the same time the Catholic teachings against the practice of charging interest on loans, a philosophy borrowed from Judaism, opened up the role of moneylender to Jews across Christendom, who were exempt from these Catholic proscriptions. These factors, along with forced ghettoisation, saw Jewish communities across Europe settle in cities and centres of commerce.

Ireland was no exception to this phenomenon. In the centuries since their first arrival the majority of the island’s Jewish population has been concentrated in Dublin, with smaller communities in Cork, Limerick, and Belfast. Though making up only a fraction of the population these communities played a strong part in the community and commerce of these cities. In Belfast the German born Otto Jaffe built up his business to be Ireland’s largest linen exporter and was twice elected mayor, serving for the terms 1899/’90 and 1905/’06.

Cork similarly boasts not only Ireland’s first Jewish mayor but it also saw Gerald Goldberg elected to the position in 1977. One of the county’s great heroes, William O’Brien, was supported by his Jewish wife, Sophie Raffalovic, during his time as MP and leader of the United Irish League. With both people’s having a large Diasporas and a shared history of persecution it is not surprising that Jews found, for the most part, a warm welcome on Irish shores through for most of our shared history. The highpoint possibly lies with the striking of ‘Statutum de Judaismo’ and other anti-Semitic laws from the British Statute Book in 1846, thanks in large part to ‘the Great Emancipator’ Daniel O’Connell.

Though largely unspoiled the case of the Limerick Boycott stands out as a black mark against Ireland’s treatment of its Jewish population. Anti-Semitism had not much abated since the Middle Ages and Europe was awash with cases of violence, injustice, and aggression toward Jewish people during the 19th and 20th centuries. In 1904 Father John Creagh gave a sermon at his Church in Limerick City during which he echoed the rhetoric used to demonise Jews for centuries.

The result was a threatening march through the nearby Jewish neighbourhood on Colooney Street and a two year boycott of Jewish business in the city. Though some families left, the majority of Limerick’s Jewish community weathered the anti-Semitic storm; probably encouraged by the vocal opposition to the boycott from figures like Standish O’Grady and Michael Davitt. The Jewish populations of Limerick and Cork were, however, very small and it was Dublin that acted as the capitol for Ireland’s Jews.

During the 1870s numerous Jews fleeing the pogroms in the Russian Empire began to arrive on Irish shores. Many of these first arrivals settled around Clanbrassil Street and began to establish a community for themselves. Economic prosperity and continued immigration saw this community grow and schools, synagogues, and kosher butchers and bakeries began to popup around Portobello; quickly earning the neighbourhood the title of ‘Dublin’s Little Jerusalem’.

This wasn’t a community that kept to themselves, however, and the people of ‘Little Jerusalem’ quickly became involved in Irish politics and society. Over the course of the 20th century this neighbourhood and Dublin’s wider Jewish community has provided Supreme Court justices, numerous Mayors and TDs, as well as Israel’s first Chief Rabbi and its sixth President. 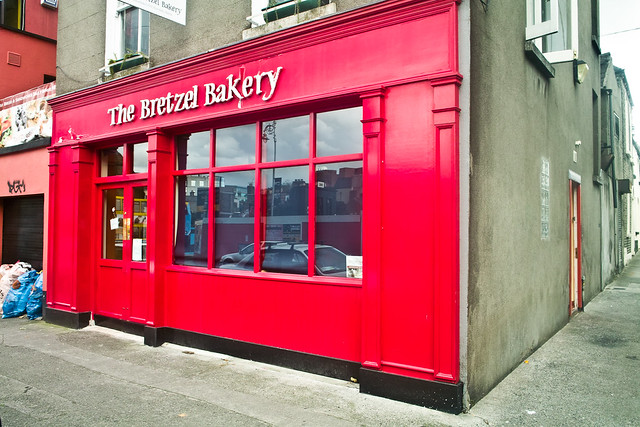 Though Robert Briscoe became known as Dublin’s first Jewish mayor he had come to prominence years before as an international spokesperson for the IRA and a Dublin TD; holding his seat for 38 years before being succeeded by his son Ben. Sent to America with Eamon de Valera, Robert helped to drum up international support before being sent to Germany in 1919 where he was the IRA’s chief agent for procuring arms.

While Leopold Bloom, with his journey through the capitol in James Joyce’s ‘Ulysses’, might be Dublin’s most iconic Jew, the most important is undoubtedly Yitzhak Herzog and his son Chaim. A native of Lomza, now located in north-eastern Poland, Yitzhak moved to Britain at the end of the 19th century. By 1916 he was rabbi of Belfast, where he son Chaim was born in 1918. The year after Chaim’s birth Yitzhak was made rabbi of Dublin and he moved with his family to Portobello.

A supporter of Ireland’s independence movement, and reported fluent Irish speaker, Yitzhak became the first Chief Rabbi of Ireland in 1922. He remained at this post until 1936 when he went to Palestine to take the post of Ashkenazi Chief Rabbi. This posting saw him live through the end of the British Mandate and the formation of Israel, serving as the state’s first Ashkenazi Chief Rabbi from 1948 till his death in ’59.

In 1983 Yitzhak’s son Chaim was inaugurated as the sixth President of Israel. He served the maximum two five-year terms during which time he opened the Irish Jewish Museum in Portobello. Belfast born and Dublin reared, Chaim’s emigration to Palestine in 1935, military service during the Second World War (where he reportedly identified a captured soldier as Heinrich Himmler), and diplomatic career reportedly did little to dull his accent. For a while at least the President of Israel addressed the world in a voice infused with the tones of Portobello.

Israeli Ambassador to the UN, Chaim Herzog, and others speak at the United Nations General Assembly Session on November 10th 1975

Robert Briscoe’s memoir ‘For the Life of Me’ is a wonderfully vivid tale of the life of late TD and Mayor of Dublin. Nick Harris’ ‘Dublin’s Little Jerusalem’ offers another view of life as a Jew in Dublin and Ireland during the 20th century while Ray Rivlin’s ‘Shalom Ireland’ offers a more wide reaching account of the life of Irish Jews from the 19th century to today.