Bastian Schweinsteiger has confirmed his retirement from professional football at the age of 35.

The high point of his decorated career was helping Germany win the 2014 World Cup in Brazil with a 1-0 extra-time win over Argentina at the Maracana.

Schweinsteiger also won the 2013 Champions League, 8 Bundesliga titles and 7 German Cups with Bayern Munich, and was inducted into the club's hall of fame in 2018.

Currently with MLS side Chicago Fire, Schweinsteiger released a statement today confirming he'd be stepping away from the game at the end of this season.

Schweinsteiger thanked each of his career clubs - Bayern, Manchester United and Chicago Fire - as well as the German national team and the fans of each for his glittering career. His wife, former tennis world no.1 Ana Ivanovic and family also got a 'thank you' from the midfielder.

A proficient skiier as a youth, Schweinsteiger worked with retired World Cup alpine ski racer Felix Neureuther before deciding to focus his attentions on football.

Schweinsteiger said in 2006, "I enjoyed both sports, but then came the offer from Bayern Munich and I just had a gut feeling it was right.

"Football was so popular, and skiing was never like that. Carrying those skis around was annoying too."

His senior Bayern debut came in November 2002 as a substitute against Lens in the Champions League. He would go on to become a key part of the Bayern side that won eight Bundesliga titles between his debut season of 2002-03 and 2014-15.

Schweinsteiger made his international debut in a June 2014 friendly against Hungary, less than 18-months after his senior club debut. He quickly impressed manager Rudi Voller, so much so he was a late inclusion in the squad that exited in the group phase of Euro 2004.

Two years later, he played every game of Germany's third-place finish of the World Cup they hosted. Schweinsteiger played all but 9-minutes of his country's run to a third-place finish in South Africa in 2010. They lost in the semi-finals of Euro 2012, but would go even better two-years later. 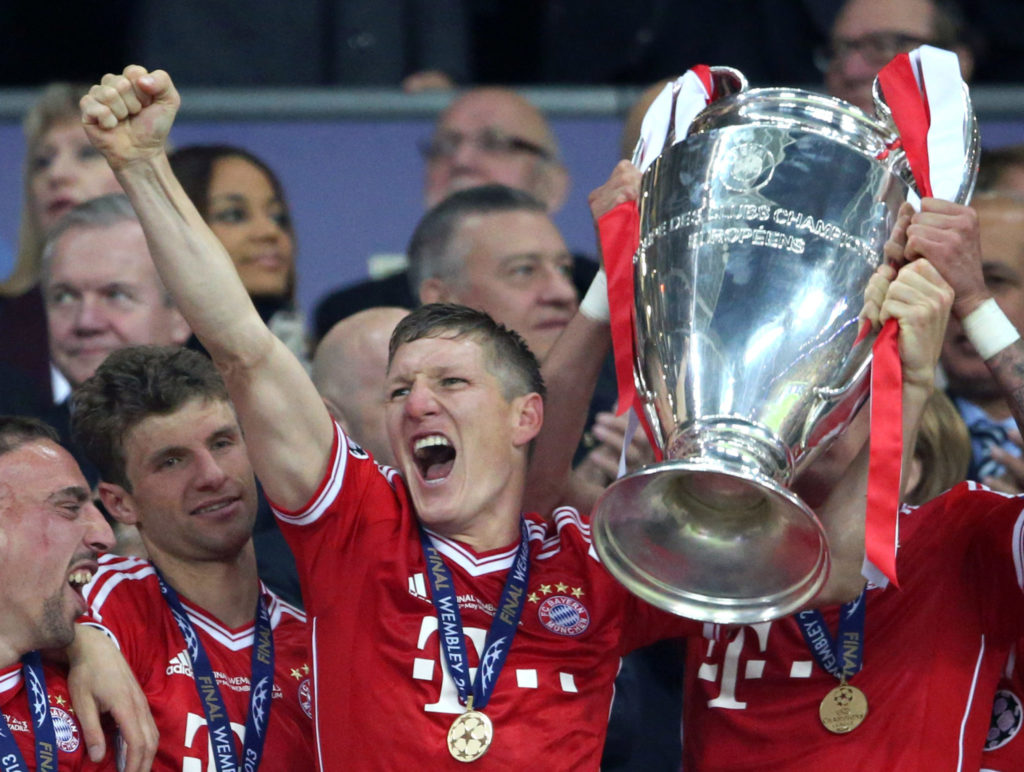 Injuries began to encroach on Schweinsteiger's career from 2011, but he was no less a central cog to the Bayern machine.

He started alongside Javi Martinez in midfield as Bayern beat a Jurgen Klopp-managed Borussia Dortmund 2-1 at Wembley to claim the club's fifth Champions League crown in 2013.

He was on the bench for their opening group game against Portugal at that World Cup, but started the remainder of their games.

"Schweini" was part of the side that humiliated Brazil 7-1 in the semi-finals in Belo Horizonte, before playing all 120 minutes of their extra-time win over a misfiring Argentina in the final.

In 2015, he became the first German player to play for Manchester United. Signed for €9m by Louis van Gaal, on paper it seemed like the ideal move for all involved.

Injuries, suspensions and a dip in form meant he made just 18 appearances for United in his first season at Old Trafford. The following season under Jose Mourinho would be even worse, with the new manager demoting the World Cup winner to training with the club's U23's.

Schweinsteiger would be restricted to cup appearances before sealing a March 2017 move to Chicago Fire.

A popular figure for the Windy City side, even after slowing down, he went on to play for three seasons, before confirming the 2019 campaign Stateside would be his last.