England have been drawn in an historically fiery group for this year's World Cup in Qatar.  Gare...

England have been drawn in an historically fiery group for this year's World Cup in Qatar.

Gareth Southgate's side are top seeds in Group B, and will open their tournament against Iran on November 21. With that match taking place on the first day of the World Cup, it means there will be just eight days between the last round of scheduled Premier League fixtures and England's opening game.

England have never played Iran at senior international level before. Adding further spice to Group B is the presence of the United States. The one and only previous meeting of Iran and USA in a competitive game came at the 1998 World Cup in France.

The fourth team in that group will only be revealed when the last European playoff path reaches its conclusion (hopefully) in June. That means Scotland, Ukraine or Wales will join England and co.

Tournament hosts Qatar will play in the first match of the competition - against Ecuador. Joining them in Group B are the Netherlands and Africa Cup of Nations champions Senegal.

For the fourth time at World Cup finals, France will meet Denmark. Their last meeting in Moscow was the only scoreless game in the group phase of the 2018 World Cup.

Also in Group D will be Tunisia and one of Peru, UAE or Australia.

While the group stages appear benign for England and France, should they win their respective groups and last-16 games they'll meet in the quarter-finals. 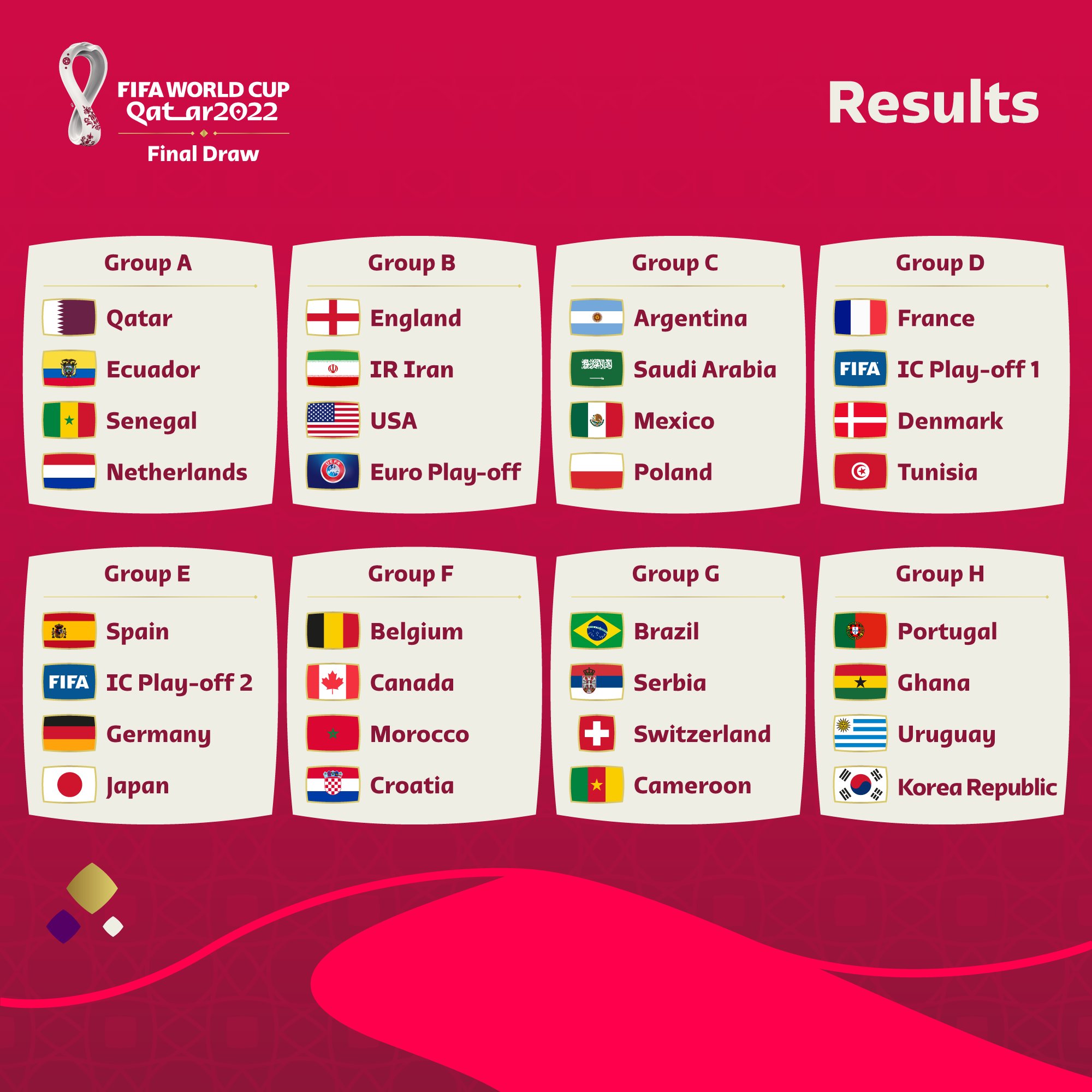 The standout pairing of the Group stage is in Group E, with Germany and Spain playing in the second round of fixtures on November 27. They have Japan and either New Zealand or Costa Rica for company.

Five-time winners Brazil have been drawn in Group G along with Serbia, Switzerland and Cameroon.

There's a chance for Ghana to avenge their controversial exit from the 2010 World Cup, as they've been drawn with Uruguay for the first time since that fateful night in Johannesburg. Portugal and South Korea are the other teams in Group H.

Canada's first World Cup since 1986 will begin against the might of Belgium in Group F. They'll also play Morocco and Croatia.

And Group C could prove tricky for Argentina, as they've been drawn alongside Poland, Mexico and Saudi Arabia.

It all gets underway on November 21.

FIFA President Infantino: "There are too many meaningless matches"