Mayo star Lee Keegan was our guest on Episode Two of the OTB Kids Takeover this week - as he answ...

Mayo star Lee Keegan was our guest on Episode Two of the OTB Kids Takeover this week - as he answered questions from children across Ireland!

We'll be putting a number of different sportspeople in front of the camera, as they take on the ultimate challenge. Brian O'Driscoll was first up, as he responded to questions from children all over the country.

Four-time All Star Keegan was asked his first question by Zach in Dubin, who queried whether he'd prefer to be playing for Dublin so he could win an All-Ireland!

"Zach is putting me on the spot here! No - obviously playing for Mayo was my sole goal and something I love doing. Obviously we'd all love to be in the position Dublin are in and I suppose winning in the capacity they're winning.

"If I was to ever pick another county it would probably be Cavan. My mother is born and bred there so if I was to pick one it would be there.

"I love playing for Mayo and love having the battles against [Dublin] throughout the years and the bit of craic that goes with it. I'd have to say a no to that one!"

'Dean in North Dublin' caused a bit of a stir by bringing  up the GPS incident from the one-point All-Ireland final defeat to the Dubs back in 2017, asking if a fitbit would be easier to throw.

"See a fitbit's a bit different to the GPS - you have to take it off your wrist whereas the GPS is nicely tucked away in a little pocket. I don't really have enough advice on that... just probably don't do it would be my follow-up to that!

"It caused a bit of a stir so it's something I won't be doing anytime in the future. I think it caused enough trouble in the last year or two so we'll probably leave it at that one!"

Kayleigh Casey in Charlestown asked Lee who the most difficult player is to mark, both within the Mayo squad, and in terms of opposition players he has come up against. 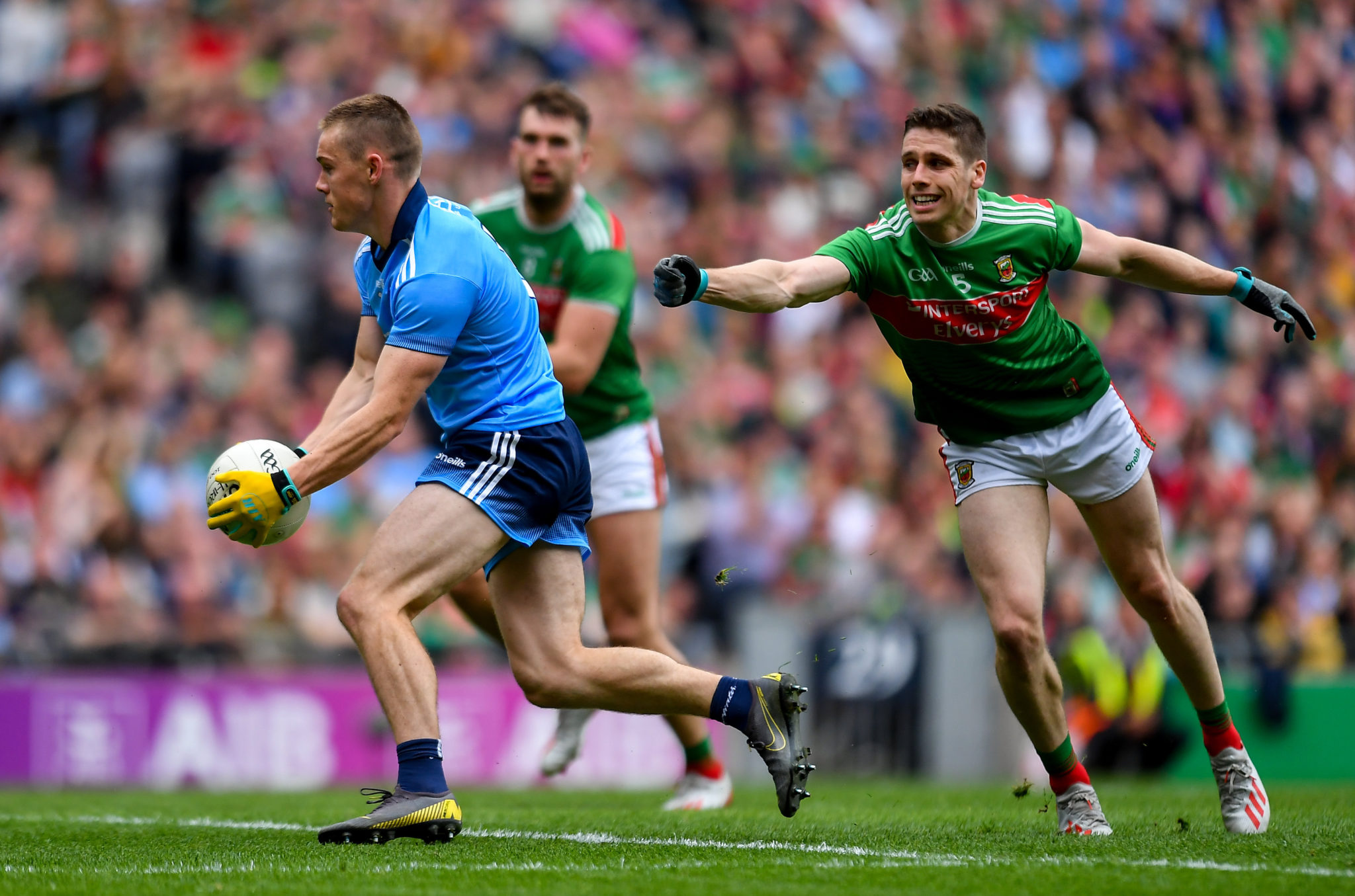 10 August 2019; Con O'Callaghan of Dublin gets past Lee Keegan of Mayo on his way to scoring his side's second goal during the GAA Football All-Ireland Senior Championship Semi-Final match between Dublin and Mayo at Croke Park in Dublin. Photo by Piaras Ó Mídheach/Sportsfile

"A guy that I've found very difficult and tricky over the last two years in particular in training would be James Carr. People at a national level have seen what he's capable of doing, particularly his goal against Galway last year.

"Believe me he does that in training quite regularly! Trying to chase James down is quite difficult, he's a big, strong young man so he's definitely got plenty of legs on some of us older types of guys.

"I'm going on recent context, I suppose last year I had to mark some difficult guys. Obviously Con O'Callaghan was a very tricky customer and a guy I had serious respect for going into our game.

"He got the better of our duel in the All-Ireland semi-final!"

Keep an eye on our social channels for future episodes of the OTB Kids Takeover - you'll be able to send in questions via WhatsApp!