The semi-final line-up at the Women's World Cup has been completed with the Netherlands and Swede...

The semi-final line-up at the Women's World Cup has been completed with the Netherlands and Sweden joining the last-four.

The Oranje made history by making it to this stage of the competition against Italy who matched their best showing by getting to the last eight.

Two headers, one from Vivianne Miedema and another from Stefanie Van der Gragt helped the current European Champions to victory in front of over 22,000 fans at the Stade du Hainaut in Valenciennes.

The goals came from crosses whipped into the box from 29-year-old midfielder Sherida Spitse. She said the conditions made playing difficult:

"It was really warm today, you see it was going a little bit slow but that is normal. I felt it, but still, we won.

"It feels really nice that I can be important with my free kicks, we know we have the strength with headers in the box. But the most important thing is that we won and are going through to the semi-final and Tokyo."

They'll be joined by Sweden who are ranked ninth in the world, after beating Germany 2-1 in Rennes this evening. 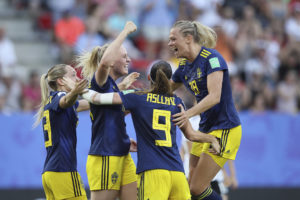 The Germans were favourites heading into the game, and the two-time champions took an early lead with thanks to a 16-minute goal from Lena Magull.

However, the Swedes turned it around with Sofia Jakobsson finding the net eight minutes later.

The turn around was complete three minutes into the second half when Stina Blackstenius got the decisive goal after 48 minutes.

Sweden's best previous finish at the Women's World Cup was at the first staging of the event in China in 1991 when they finished third.

In the other semi-final reigning champions, the United States face off against Phil Neville's England team.

The final takes place in Lyon at the Groupama Stadium on July 7th.