McBrearty will be part of Donegal's Allianz Football League plans

McBrearty will be part of Donegal's Allianz Football League plans

The Kilcar forward is currently in the United States and will miss their opening Division One game with Mayo.

But Bonner explained to Highland Radio that McBrearty will return from America in late January.

Donegal's first game against James Horan's side is in Ballybofey on January 25 before a February trip to Navan to play newly-promoted Meath.

"I sat down with Patrick before he left, and he was taking a ten-week break and he was going to travel Stateside", Bonner told Oisín Kelly.

"Patrick's going to be an important part of us as we move forward, but as the last couple of matches have shown there's a number of lads there ready to step up." 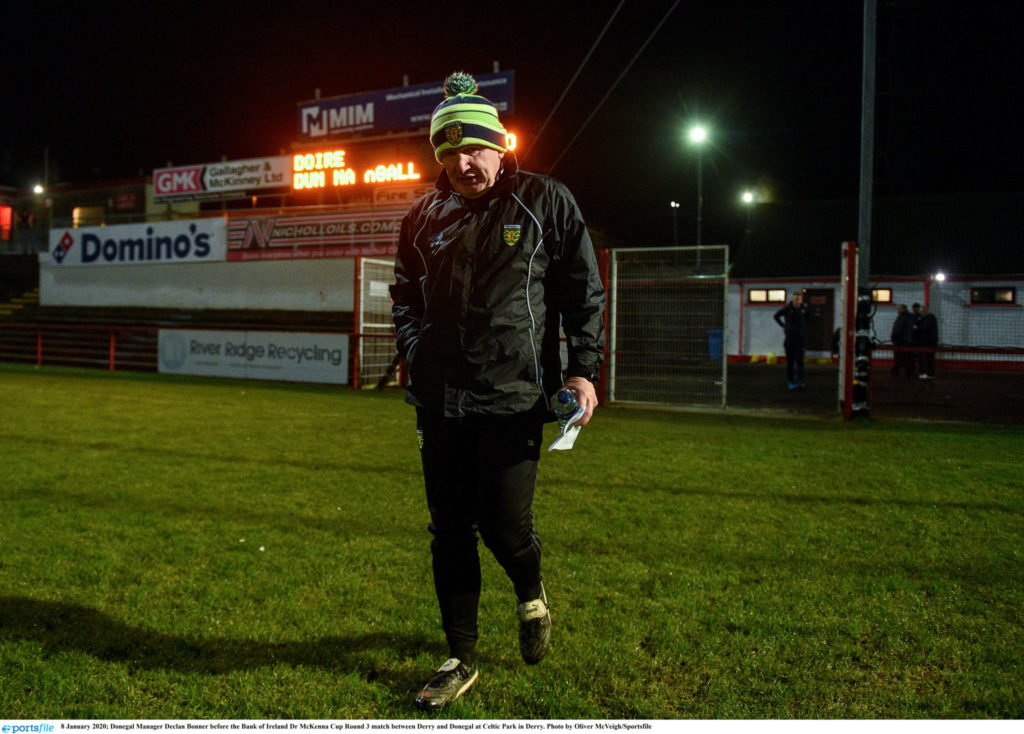 A combination of Sigerson Cup duties for a chunk of his squad, combined with injuries left the Donegal manager with only 13 players available for the game at Brewster Park.

Donegal requested the game be moved to Tuesday (January 14) but Ulster GAA said it was to go ahead on Sunday.

Bonner told Highland they'd been left in the "regrettable" scenario where they'd no option but to pull out.

The 1992 All Ireland-winner questioned the sanity in having McKenna Cup fixtures running side-by-side with college competitions, "The fixture should not be taking place - that's the bottom line.

"It's a really really ridiculous time of the year.

"A lot of these young lads are doing exams, they're under pressure and it's a very very frustrating time to be quite honest."

Ulster GAA say counties had voted against playing the McKenna Cup earlier in the season to avoid such fixture clashes.

"I feel sorry for these young lads", Bonner continued, "I was not going to put any pressure on them, I mean a lot of them are in doing exams this weekend, then they're out representing their colleges on Sunday in the Sigerson.

"And they're back in on Monday morning doing exams again - huge pressure on these lads, and unnecessarily so."

Bonner hopes neither Donegal nor any other county finds themselves in a similar position in the years ahead, "We've made a stand on it, and if we had a squad of players to play this weekend - if we had anything up to 18 or 19 players to tog out -  we would have fulfilled that fixture.

"It needs to be addressed and it's up to the powers-that-be to deal with it as a matter of urgency".

With Donegal's withdrawal, Monaghan have been handed a walkover into the final on Sunday January 12 at the Athletic Grounds in Armagh.

The same venue will host this Sunday's remaining semi-final clash of Down and holders Tyrone.