Ole Gunnar Solskjaer thinks Brazilian Fred has the ability to replace the injured Paul Pogba, who...

Ole Gunnar Solskjaer thinks Brazilian Fred has the ability to replace the injured Paul Pogba, who will be out of action until December.

The Manchester United manager was speaking at a press conference ahead of tomorrow night's League Cup Round of 16 clash away to in-form Chelsea.

United bounced back from a disappointing Premier League defeat to Newcastle with a draw at home to table-toppers Liverpool, an away Europa League win in Belgrade, and Sunday's impressive 3-1 win at Norwich City.

Pogba is struggling with an ankle injury and is unlikely to play until towards the end of the year, but Solskjaer singled out Fred and Andreas Pereira for praise in his stead.

“Fred will probably take Paul’s position for a while now and he’s been brilliant for us, but Andreas has grown the last few games.

His energy and running, chasing – he's a different sort of no.10, he can play also in the central positions.

I’m delighted for Andreas – great professional, great attitude. He does his job to the best of his abilities.

The boss has hinted that there may be more minutes for two #MUAcademy youngsters on Wednesday...#MUFC #CarabaoCup

A number of those players are likely to feature at Stamford Bridge tomorrow evening, and Solskjaer says he has every trust in them to perform.

"Character will be revealed in tough times, but I think the young kids have been excellent,’ added the United boss. ‘I can’t give them any more responsibility and I couldn’t be any more happy with many of the youngsters.

"We know it’s been tough, and we know that we have asked a lot of them because Paul (Pogba), Luke (Shaw), Anthony (Martia) and loads of other players have been injured. The youngsters have stepped up in a difficult period. But in the end they will be stronger for it."

The Norwegian saw his side comfortably beat Frank Lampard's Chelsea 4-0 on the opening day of the Premier League season, but he knows that was a result the Londoners won't want to see repeated. 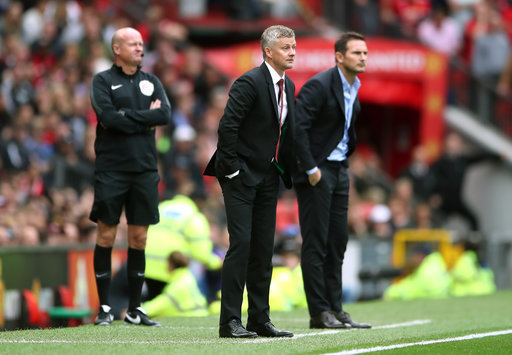 "I think Frank has done a good job because the performance against us was good. The result was bad. We held our hands up then as well and said 4-0 was flattering.

"We got pegged back and they pressed us but we scored two goals within a minute, the second and third, which decided the game for us. But we didn’t think we were 4-0 better than them. It is going to be an interesting game. We don’t make it easy for ourselves in the cups with the draws."

Chelsea have won their last seven games in all competitions, with players like Christian Pulisic, Mason Mount and Tammy Abraham among those impressing.

American star Pulisic hit a hat-trick with Willian also on the scoresheet in Saturday's 4-2 win over Burnley at Turf Moor.