Vera Pauw has admitted the Republic of Ireland need to win their next two qualifying matches to k...

Vera Pauw has admitted the Republic of Ireland need to win their next two qualifying matches to keep their hopes alive of making it to Euro 2021.

The Girls in Green face Montenegro next Wednesday but first they entertain Greece at Tallaght Stadium tomorrow night (k/o: 19:15).

"We consider this a must-win game if we are to secure second place in the Group," said Pauw ahead of the crucial qualifier.

"We played Greece in our last game so we know a lot about them and we are ready for this test, which will be different as we have more of our players available to us this time."

It was a disappointing draw last time out as Ireland took the lead thanks to an Amber Barrett but then conceded in the third minute of added time at the end of the game.

The players should be spurred on by the Green Army with 5,500 tickets sold for the match in Dublin 24.

“We are delighted that ticket sales have been going so well, but I would like to encourage everyone who has a ticket to come to the game," added Pauw.

"We need the support of the fans and we want them to be loud, because that gives the players a real boost during difficult moments in the game." 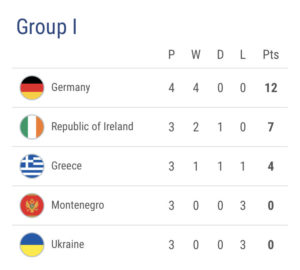 Ireland are unbeaten and second in the group after three matches.

Before the November draw in Greece, they beat Ukraine (3-2) and Montenegro (2-0) at Tallaght Stadium.

The nine group winners and the three best runners-up (not counting results against the sixth-placed team) qualify directly for the finals in England, while the remaining six runners-up advance to the play-offs.

It is vital that Ireland win as many points as they can with two games against a very strong Germany team yet to come.

TEAM NEWS
Pauw was already left without Man City defender Megan Campbell who is out with a long term injury.

The trio of Megan Connolly (shoulder), Jessica Ziu (groin) and Leanne Kiernan (knee) have also been ruled out of the game, but American-born Kyra Carusa is one of four uncapped players in contention after receiving FIFA international clearance last week.

Centurion Aine O'Gorman looks set to feature for the first time after reversing her decision to retire from international football.

- Over 5,500 tickets have been distributed for this game and Ticketmaster vans will be on-site outside Tallaght Stadium. The record attendance for a WNT home game was set in the victory over Ukraine last year with 5,328 spectators turning up

- Defender Diane Caldwell is set to win her 75th senior cap having made her debut on March 16th, 2006

- Forward Kyra Carusa, born in San Diego, qualifies through her maternal grandparents, from Cork & Laois respectively. She has just joined HB Hoge in Denmark having previously been the 19th overall pick by Sky Blue FC in the NWSL Draft

- English-born forward Nicole Douglas trained with the squad this week but her eligibility has not yet been finalised. She plays for Arizona State University

Match preview and live updates on Off The Ball from 7pm - which you can listen to on the Go Loud app.
Live on TV: RTÉ2

John O'Shea sets sights on another Euro finals with Ireland