The Belgian playmaker was captured laughing and joking with his former Chelsea teammates following Real's 2-0 defeat at Stamford Bridge on Wednesday night.

Hazard's friendliness didn't go down well with Real fans both within and without the media.

We think it’s safe to say there’s a lot of people in Madrid not overly pleased with Eden Hazard. 😬#LLL
🧡🇪🇸⚽️ pic.twitter.com/o9UueeHKEo

He added, "A lot of people say he is the new Bale. Madrid have spent years waiting for him, negotiating for him, spent €100m on him.

“They’ve just been eliminated, and it is possible for him to find something funny? After Zidane gave him the opportunity to play when he didn’t deserve it? He laughs at everyone?

“There is a lot to analyse about Madrid, such as Zidane’s future, whether Ramos is fit or not to continue, whether there must be changes in the team, whether new signings must be made such as [Kylian] Mbappé, as well as [David] Alaba. There have to be big changes.

“But the situation with Hazard is very serious. Hazard cannot continue for one second more in Madrid.”

The over-the-top criticism has been addressed by Hazard himself on Instagram.

"I have read lots of opinions about me today, and it was not my intention to offend the Real Madrid fans.

"It has always been my dream to play for Real Madrid and I came here to win.

The season is not over, and together we must now battle for La Liga! Hala Madrid! 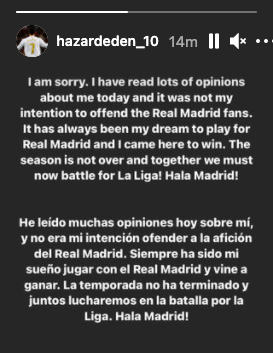