Darren Randolph a doubt for Republic of Ireland's Denmark decider

Republic of Ireland goalkeeper Darren Randolph may not be fit for the international games against...

Darren Randolph a doubt for Republic of Ireland's Denmark decider

Republic of Ireland goalkeeper Darren Randolph may not be fit for the international games against New Zealand and Denmark next month.

Mick McCarthy's charges first play an international friendly against New Zealand on Thursday, November 14th before the crucial EURO 2020 qualifier against the Danes on Monday, November 18th. Both games are at the Aviva Stadium.

It's thought the 32-year-old could be out of action for up to six weeks.

'Boro' manager Jonathan Woodgate was asked for an update on Randolph's condition after the game, and he wasn't able to provide too much detail on the length of any potential absence. 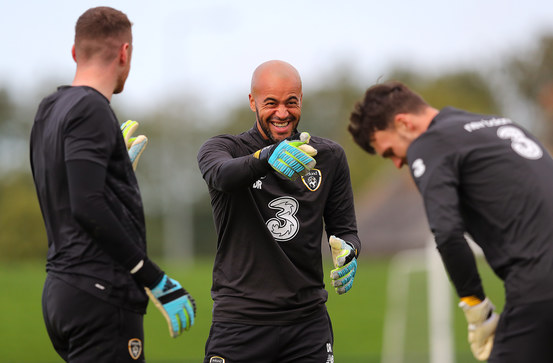 "I don't know how long he's going to be, we'll have to go through the scans. He was sore coming back from international duty and he played against West Brom and he was sore with it.

Middlesbrough are currently struggling in the Championship, hovering just above the relegation zone in 21st position in the table.

They have picked up just eleven points from their opening 13 games. A clean sheet was one positive to take from Randolph's replacement between the sticks, Aynsley Pears, who was making his league debut.

It was just a third point on Middlesbrough's travels this season and they are now six games without a win - with only two draws among those results.

The Republic of Ireland's back-up goalkeeping options include 20-year-old Bournemouth shot-stopper Mark Travers, who has been limited to appearances in the Carabao Cup this term, and Kieran O'Hara, the Manchester United 'keeper on loan at Burton Albion.