Dan Carter to make Super Rugby comeback for the Blues

It has been reported that Dan Carter is set to make his return to Super Rugby as short term injury cover for the Blues.

It is said in New Zealand that the Blues had been in talks with Carter for some time. An injury to Stephen Perofeta, full-back with the franchise, in training this week may have fast-tracked the chance to sign Carter on a replacement contract ahead of the Super Rugby Aotearoa competition, due to start in mid-June possibly with spectators.

A leaked WhatsApp message has been widely shared is apparently one delivered by Auckland Blues coach Leon MacDonald to staff on Wednesday, which says Carter will be "joining the squad as injury cover for Stevie (Stephen Perofeta)". 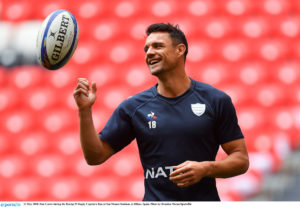 The Blues have not confirmed the leaked message, but it has been widely reported that Carter is returning.

Dan Carter's imminent arrival at the Blues, even temporarily, leaves them with an enviable attacking roster with Beauden Barrett also now at the franchise.

It will be an odd sight for fans to see the 112-cap All Black in Auckland colours, having made his Super Rugby name at the Crusaders down in Canterbury.

Test rugby's highest ever points scorer is a free agent after finishing his playing commitments with Japanese club Kobe Steelers. The season there was cancelled due to the coronavirus pandemic, and he has since returned to Auckland with his family.

Carter is said to be keen to give something back to New Zealand rugby as the curtain comes down on his glittering rugby career. The Blues will also get the fly-half for a steal as he will only cost a reported $1800 a week.

It's not the first time in the last few years Dan Carter has dropped in to help out a club in need having gone back to Racing 92 in February 2019 as cover for Patrick Lambie who had to retire due to concussion.