Ten-pin bowling is how Michael Carruth relaxed before winning Olympic gold, an achievement he fee...

Ten-pin bowling is how Michael Carruth relaxed before winning Olympic gold, an achievement he feels Kellie Harrington can match on Sunday.

The Portland Row pugilist will fight the 2019 world lightweight champion from Brazil, Beatriz Ferreira, after winning her semi-final on Thursday morning and Carruth is one of the few Irish boxers who can give her an insight into preparing for the biggest fight of her life.

Harrington won the world title a year before Ferreira so won't be an underdog as Carruth was in Barcelona, heading into a fight against the reigning world champion Juan Hernández Sierra from the boxing stronghold of Cuba.

"Sometimes you just want to get away from the boxing," said Carruth as he recalled the days in the build-up to the 1992 Olympic welterweight final.

"But she's got great people around her. Her coach at home Noel Burke, who I work with, is a great guy as well and he'll be sending messages over."

Mobile phones were a luxury for wealthy people back in 1992 and social media wasn't even a concept back then, so Carruth could only receive messages of support ahead of his deciding fight on a landline phone or by fax. 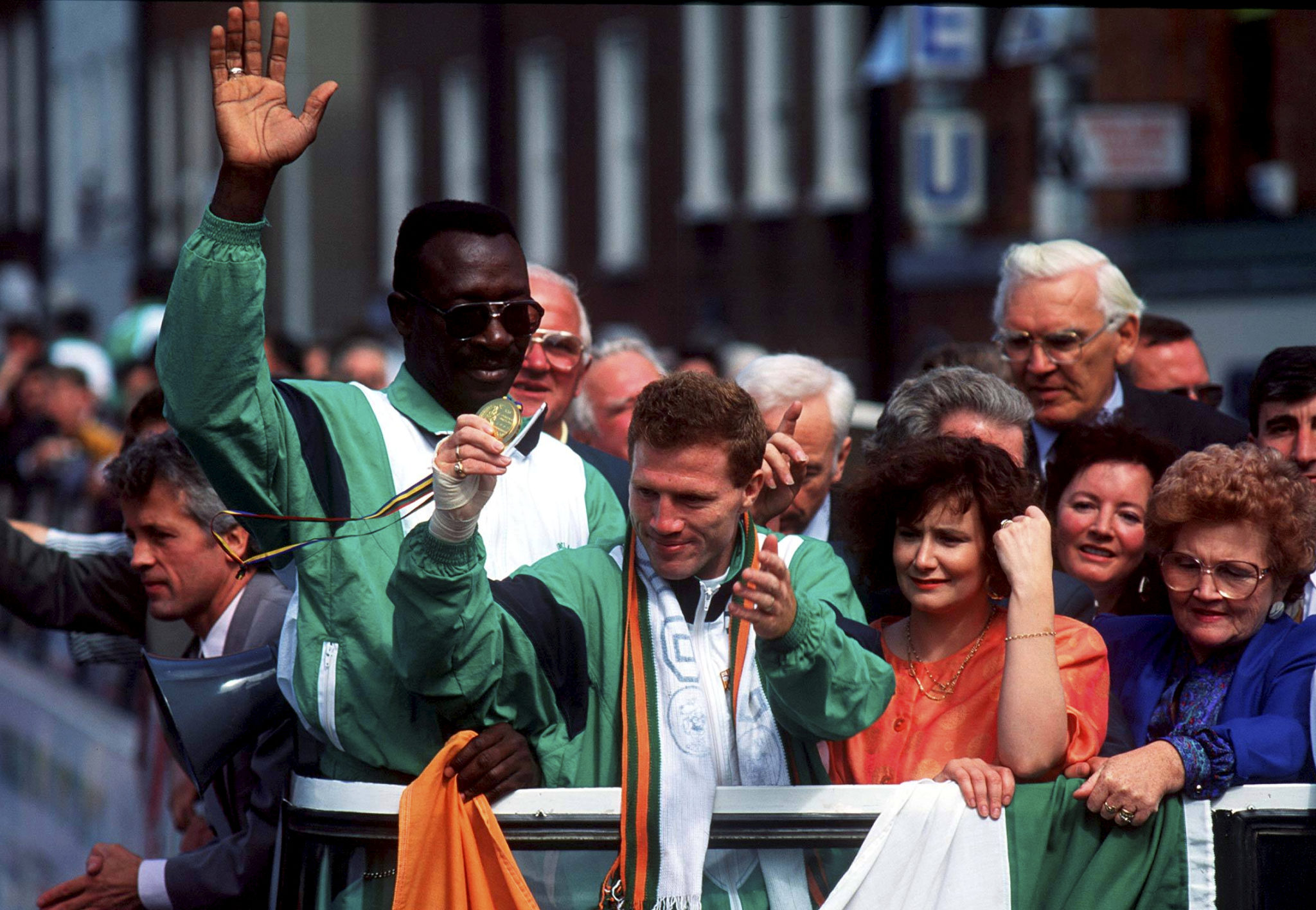 11 August 1992; Olympic Champion Michael Carruth, holding his gold medal, accompanied by his wife Paula and coach Nicholas Cruz, on board the bus which drove them through the streets of Dublin during the Irish Olympic team's homecoming from the 1992 Olympic Games in Barcelona, Spain. Photo by David Maher/Sportsfile

The Greenhills native advised Harrington to stick to her self-enforced social media ban ahead of her fight against the Brazilian.

"She should stay off her phone as much as she can, give herself maybe half-an-hour, forty minutes a day to talk to her loved ones, family and friends," said the 54-year-old.

"She has to concentrate now for the next couple of days in getting her tactics right against [Ferreira] but most importantly, getting over the [semi-final fight], do what she has to do, get back to the Olympic Village and realise that now she's in an Olympic final.

"She's one step away from becoming an Olympic gold medalist and it's well within her capabilities, there's no question about that."

As she has so many times in her excellent amateur career, Harrington showed in her semi-final win against Thailand's Sudaporn Seesondee that she is a well-rounded boxer and can dominate the ring.

Carruth warned that the final will be a different prospect and that the 31-year-old hospital worker will need to be wily in the ring against the woman from Salvador in Bahia.

"This Brazilian girl she's boxing is no mug. I watched her semi-final," said Carruth.

"She has every kind of punch that you can imagine. She likes to get into a battle which Kellie can't have her doing. Kellie has to keep her up on her toes and keeper her moving which is easier said than done sometimes."

Amateur boxing isn't all about power though, so can the Dubliner outfox her opponent?

"Absolutely! If you were to pick any boxer in the world to fight this Brazilian, you'd pick Kellie to fight her because Kellie has footwork.

"She needs to keep her hands up a little bit more than she did today. I know that's her style of fight but this girl can punch and she packs a bit of power as well so [Kellie] needs to concentrate more on her defensive side.

"But she cannot get into a war with this girl. If she gets into a war, it's going to suit the Brazilian. Kellie needs to keep her at long range, the one-twos, slipping off her left hook and shots that land and are seen to be landing. That's what she's been doing for the whole championship.

"I've based it around a fifty-fifty chance here. It's going to be exciting here getting up on Sunday morning at 6 o'clock to have a look at this but I hope half the nation, if not all the nation are up supporting her!"