A woman who runs a snail pet business says a fuss-free pet for those of us stuck at home could be...

A woman who runs a snail pet business says a fuss-free pet for those of us stuck at home could be the little shelled creatures.

Jessica Noyce runs Snails4You.com in the UK, but she supplies snails across Europe - including Ireland.

She told Sean Moncrieff they require little care, and have a very interesting diet.

"They really are a great pet for children and adults alike - they're very therapeutic to watch and they glide around their tank.

"They're quite easy for kids to handle, they don't suddenly jump out at you or jump off you.

"So they're quite an easy pet to handle and manage, and for setting up their tanks and that: once they're set up, you just need to chuck food in every few days, give them a spray each day and jobs a gooden.

"So they're quite low maintenance in that way".

She said their diet consists of a "wide variety" of food.

"Most people think they're vegetarians but they're not - they're actually omnivores.

"But the majority of their diet is fruit and veg - anything from the fruit and veg family except the onion family or the citrus family.

"But they also need meat twice a week, which you can give to them in the form of fish flakes or raw eggs or raw chicken or raw mince - or even raw steak if you're feeling extra generous".

And she said snails are perfectly fine by themselves, but can reproduce as well.

"They can be by themselves perfectly happily and grow quite large, or you can keep them in small groups with a friend or two.

"But if you do keep them together they will breed together - so two will quite quickly become 1,000.

"Saying that, keeping one by itself - cause they're both male and female - they can actually self-fertilise and still present you with a bunch of eggs".

"If you don't want a million babies to deal with, you can freeze any unwanted eggs, pop them in the freezer for 24 hours and then they're good to be fed back to the snails as a protein source."

"They would actually eat them if they came across them in the wild - they aren't fussy or maternal in that way". 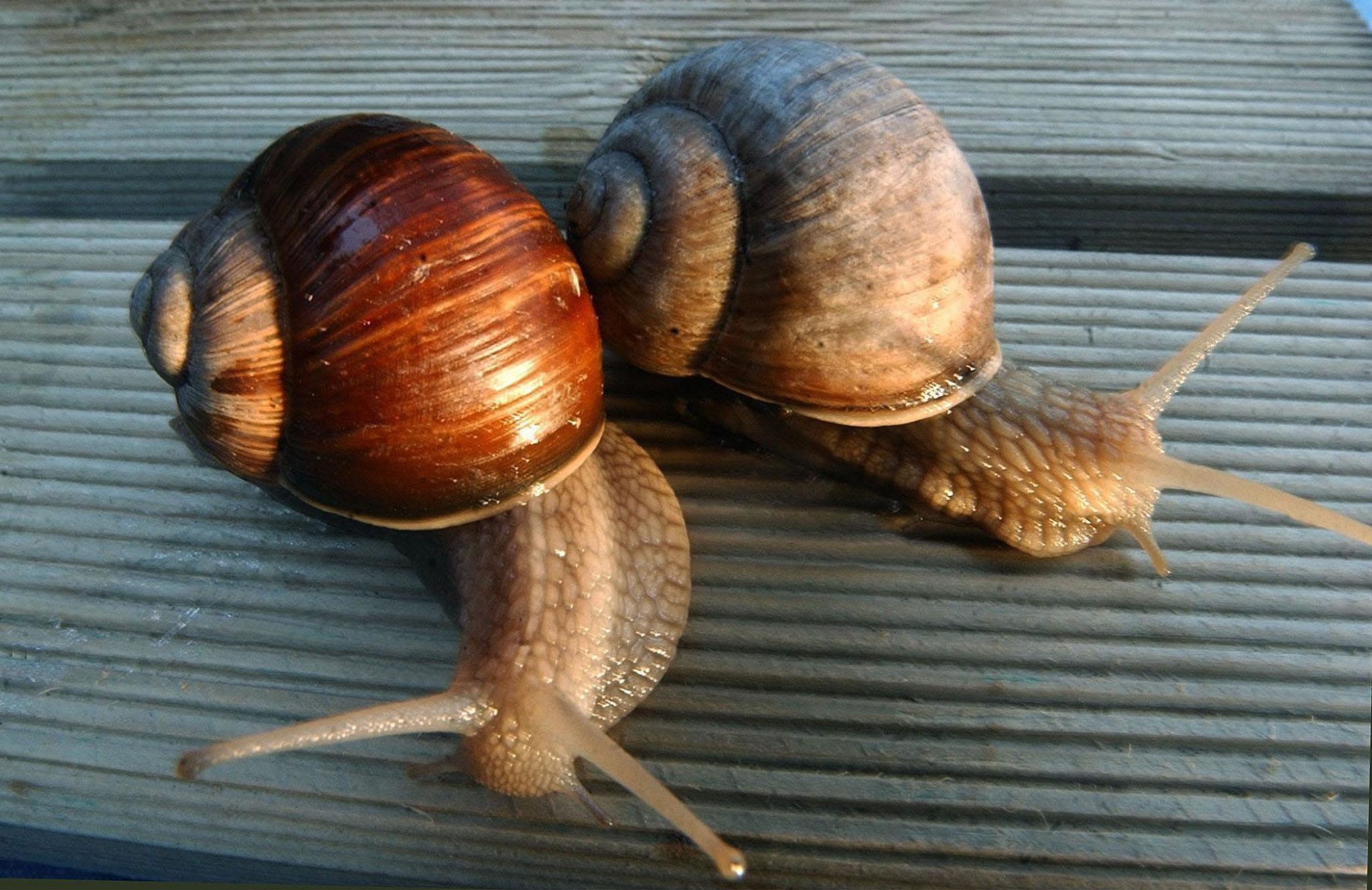 Two Burgundy snails slowly crawl across a wooden board in Lehnitz, Germany in 2004. Picture by: DPA DEUTSCHE PRESS-AGENTUR/DPA/PA Images

Asked about 'snail sex', she said: "It's kind of odd - their genitalia are contained inside of their head, and they join that together at the neck.

"And it's not just one that gets pregnant, it's both of them that get pregnant.

In terms of the various sizes of the snails, Jessica said this can vary.

"Some of them can get fairly big, bigger then your average garden snail, about seven to 10cms in shell length.

"The bigger breeds - such as the tiger snail or the elephant snail - they can reach up to 20cms in shell length and they be quite a heavy snail as well, weighing nearly a kilogramme."

"Some are more slimier than others - such as the helix pomatia, the Roman snail - but the snails themselves they're just what you expect a snail to feel like: slightly cold, slightly damp and just wash your hands afterwards."

Asked how she sends them through the post she explained: "I send them in plastic boxes filled with moss, to keep them nice and damp and provide protection during the shipping process, and then that's placed inside a cardboard box and it goes through the Royal Mail".

But she also includes a 'Handle with Care' warning on the side of the package.