'Yellow vest' protesters to be banned from Champs-Elysees in Paris

'Yellow vest' protesters will be banned from the area around the Champs-Élysées this weekend, officials in Paris have announced.

The 'Gilet Jaunes' demonstrations have been ongoing for over four months.

Initially organised as protests against a planned hike to a fuel tax, the movement quickly broadened to more generally protest against the government of French President Emmanual Macron.

Although most protests have been peaceful, the weekend demonstrations have occasionally seen clashes between police and some demonstrators - as well as some rioting.

During last week's yellow vest protests, groups of rioters and looters took to Paris' Champs-Élysées - one of the city's most popular tourist spots.

A number of luxury shops and newspaper kiosks were damaged or vandalised. 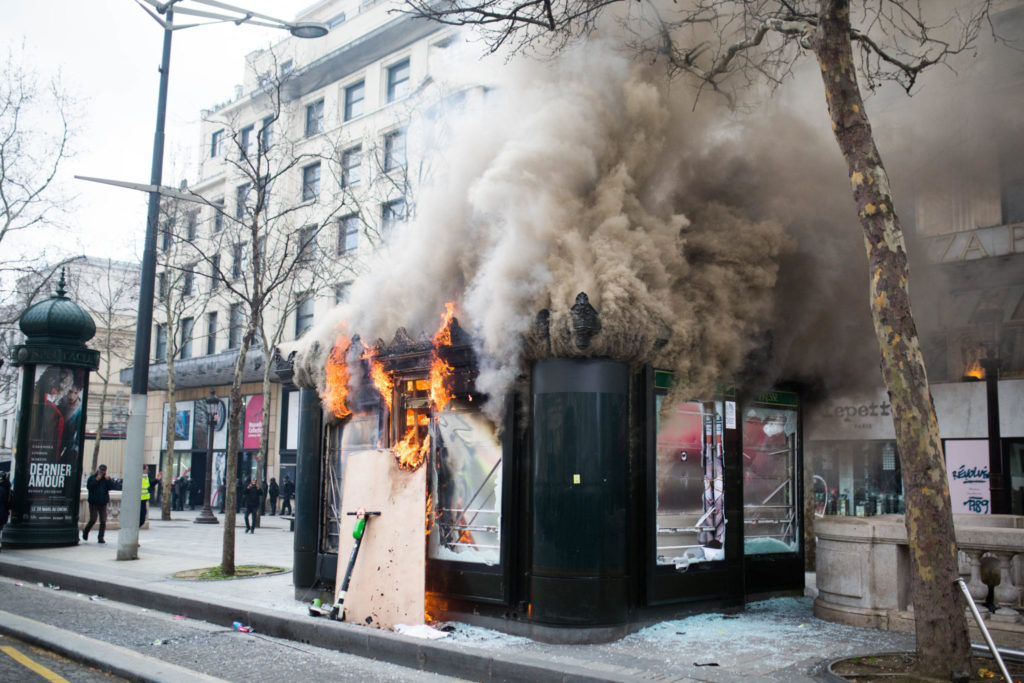 A press kiosk burning on the Champs-Elysees in Paris on March 16, 2019, on the 18th consecutive Saturday of demonstrations called by the 'Yellow Vest' (gilets jaunes) movement. Demonstrators hit French city streets again on March 16, for a 18th consecutive week of nationwide protest against the French President's policies. Photo by Raphaël Lafargue/ABACAPRESS.COM

The fresh escalation led to the firing of the city's police chief, with a new chief - Didier Lallement - having now taken over.

Today, police in Paris confirmed that demonstrations on the Champs-Élysées will be banned tomorrow.

A spokesperson, quoted by France 24, said: "There are serious reasons to believe that violence and damages are likely during the scheduled demonstrations."

For the first time, French army personnel will be deployed this weekend to help free up police forces.

France24 reports that the troops - usually deployed in anti-terror operations - will be used to secure some public buildings and sites.

However, the decision has been sharply criticised by opposition politicians from across the political spectrum.

A government spokesperson insisted the troops will only guard key sites in order to allow police to "concentrate on crowd control".

President Macron, meanwhile, is this weekend meeting Chinese President Xi Jinping in the city of Nice.

Main image: General view of the Champs-Elysees in Paris on March 16, 2019. Picture by: Lafargue Raphael/ABACA/ABACA/PA Images