Wildfires have caused a "very dire situation" in California, a local photographer has said. Calif...

Wildfires have caused a "very dire situation" in California, a local photographer has said.

California, Oregon and Washington have all been hit by devastating wildfires in recent days and weeks.

Three million acres of land have burned in California, while half a million people in Oregon have been ordered to evacuate - around 10% of the state's population.

More than a dozen people are reported to have died due to the wildfires, and whole towns have been destroyed in some of the worst hit areas.

Jarami Bond is a photographer and cinematographer who used drones to capture widely shared footage of the surreal scenes in San Francisco earlier this week.

Speaking on The Hard Shoulder, Jarami says he woke up on Wednesday to see an "orange glow on everything" inside and outside his house.

He said: "I woke up, turned over and thought it was still the middle of the night.

"I was like 'wow, this is a moment in history that may never happen again'. I was out of the house in 15 minutes.

"As the day progressed, the orange hue began to disappear - but the smoke has continued to settle on San Francisco nonetheless. It's a pretty unprecedented scene we have here.

"Everywhere I went to fly my drone, people were standing on the streets with their phones out. It was a very movie-like scene: those scenes where something crazy happens, and everybody is outside their home.

"It was like living through a movie - definitely a moment I'll be telling my kids about."

He said: "I've never seen the city transform under such a filter. That orange hue... I didn't apply any edits or filters. It was nature giving us that, purely.

"I have people that are close to me who struggle with asthma and other respiratory issues - they're at risk during times like this. They're forced to stay indoors and stay safe.

"We're in a pretty strict lockdown here in California due to COVID, but there are essential businesses that are still open. There are people who are impacted health-wise, but are still forced to go out and provide for their families.

"There are firefighters that are putting their lives on the line to try to get this under control." 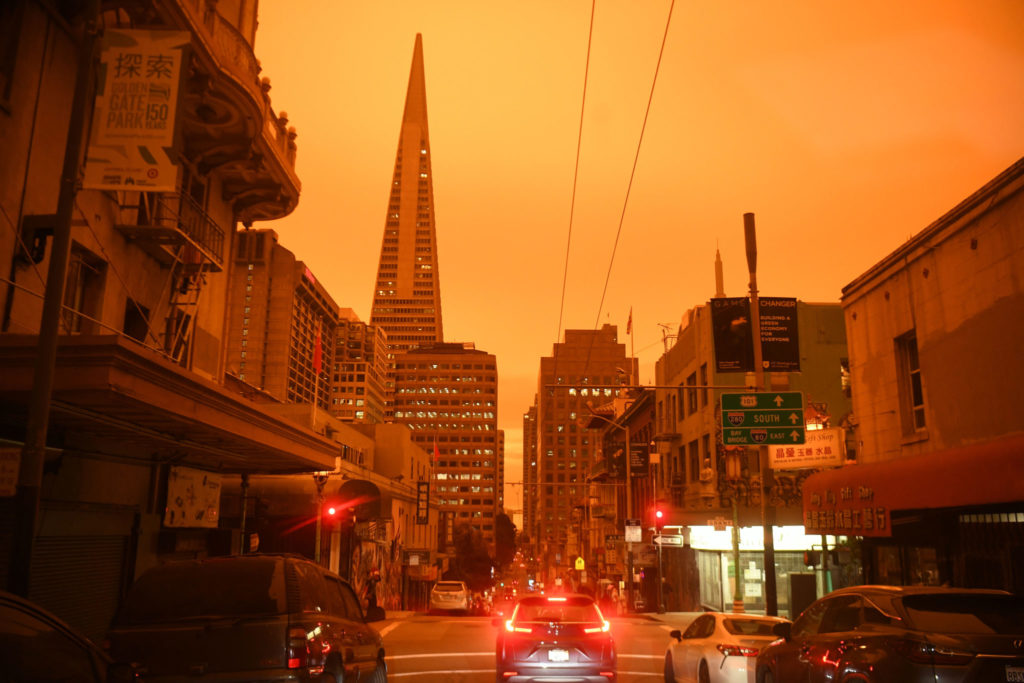 (Photo taken on Sept. 9, 2020 shows the street view at noon in San Francisco, the United States. San Francisco was still as dark as night at noon on Wednesday due to the wildfire. (Xinhua/Wu Xiaoling)

The situation comes amid the ongoing COVID-19 restrictions in the city - with Jarami saying people's masks are now acting as a 'double protector' against both the virus and the smoke.

He said: "When I was outside, I saw a little bit of ash falling - but it didn't smell smoky, which was so bizarre.

"I learned when I got home that the particulates in the air were very sneaky: you couldn't quite smell them, but they were there.

Jarami for his part wants his footage to raise awareness of climate change.

He observed: "I think this is climate change rearing its head in a way that's more tangible than it has in the past."

Main image: A car runs on the road near the Golden Gate Park at noon in San Francisco. Picture by: Wu Xiaoling/Xinhua News Agency/PA Images