Two men and a woman have died in a terror attack in the Austrian capital Vienna, with 15 others w...

Two men and a woman have died in a terror attack in the Austrian capital Vienna, with 15 others wounded.

One suspect, who was armed with an assault rifle and wearing a fake suicide vest, was shot dead by police.

It is thought at least one other attacker may still be at large.

Austria's Interior Minister Karl Nehammer described the suspect as an 'IS sympathiser' and the operation to track down any other suspects was ongoing.

He added that special forces from neighbouring countries were helping in the operation. 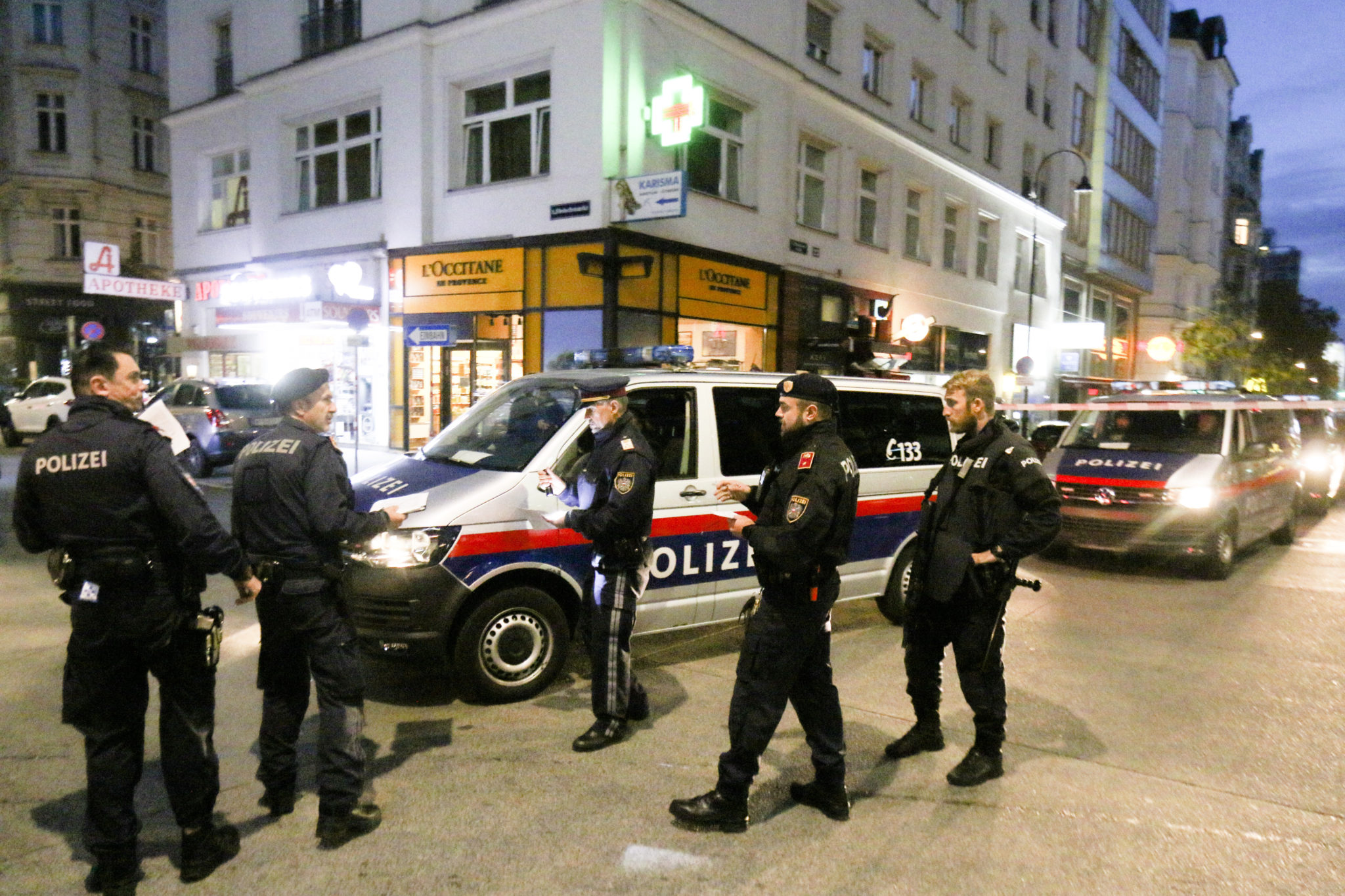 Austrian police patrol at the scene in Vienna after several shots were fired shortly after 8.00pm local time on Monday. Picture by: Ronald Zak/AP/Press Association Images

He said the home of the suspect killed by police had been searched and video material seized.

"We experienced an attack yesterday evening from at least one Islamist terrorist," he told a news conference.

He also urged the city's residents to stay at home.

The first gunshots heard at 8.00pm local time at the Seitenstettengasse synagogue.

The 15 people who were hurt in the attack are in hospital, several of them seriously injured. 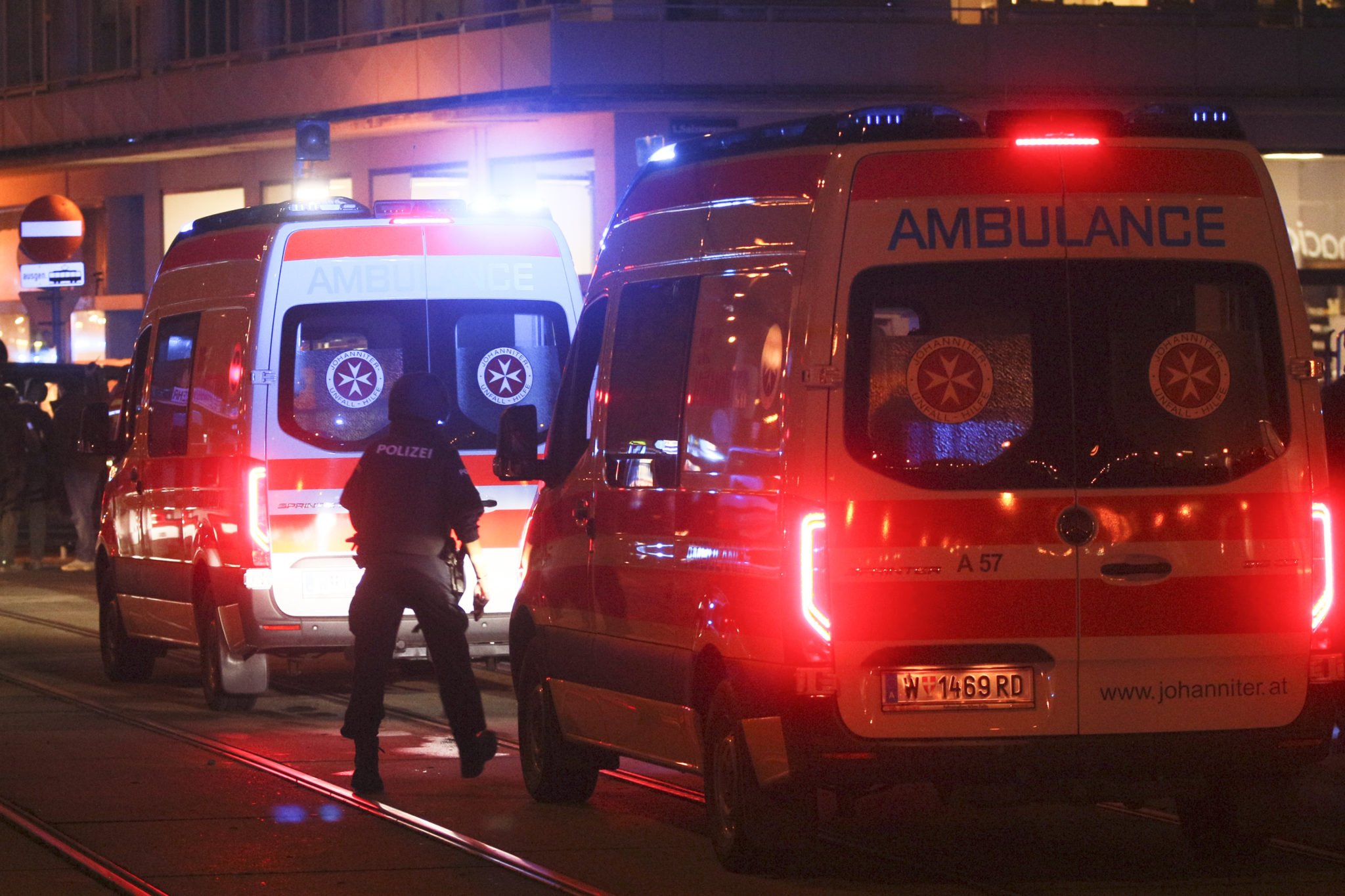 A police officer walks near ambulances at the scene after gunshots were heard during a terror attack in Vienna, Austria. Picture by: Ronald Zak/AP/Press Association Images

Rabbi Schlomo Hofmeister said he saw at least one person shoot at people sitting outside bars below his window.

Mr Hofmeister said: "They were shooting at least 100 rounds just outside our building.

"All these bars have tables outside. This evening is the last evening before the lockdown," he added.

"As of midnight, all bars and restaurants will be closed in Austria for the next month, and a lot of people probably wanted to use that evening to be able to go out."

Eveline, a witness and student, said: "First we did not know what it was, but suddenly people, who were sitting in other guests' gardens, started to run.

Austrian Chancellor Sebastian Kurz said: "I am glad that our police were able to neutralise one of the attackers.

"We will not never allow ourselves to be intimidated by terrorism and will fight these attacks with all means."

Mr Kurz said these were "difficult hours for our republic" and vowed: "Our police will act decisively against the culprits of this despicable terror attack."

He also said the army would take over some policing in the capital, to allow police to fully investigate this attack.

Foreign Minister Simon Coveney said his thoughts "are with our friends in Austria tonight after a terror attack in Vienna", while Justice Minister Helen McEntree tweeted: "We must stand united against terror".

Heartbreaking to hear of another terrorist incident tonight in Vienna. My thoughts are with the victims, their families & the people of Austria. We must stand united against terror. #Vienna 🇦🇹 🇮🇪

French President Emmanuel Macron tweeted that the French "share the shock and grief of the Austrian people hit by an attack tonight".

He wrote: "After France, this is a friendly country that has been attacked. This is our Europe ... We will not give in."

Local media in Austria reported earlier that a synagogue had been attacked and shots fired in the area of a nearby square, Schwedenplatz, while there were unconfirmed reports of coordinated attacks nearby.

Oskar Deutsch, the head of the Jewish community in Vienna, said shootings took place in the street where the city's main synagogue is located - but that it was not clear whether the synagogue had been targeted.

Mr Deutsch tweeted that the synagogue was closed at the time of the shootings.

In other videos uploaded to social media, armed officers were seen patrolling the streets and gunfire could be heard in one clip recorded from a window above a McDonald's restaurant.

The Embassy is aware of an active incident in #vienna city centre. Please avoid the area and follow advice of @LPDWien. For consular queries please contact +353 1 408 2000 @dfatirl

Main image: A police officer patrols in front of an entrance of a car parking with broken glasses after a shooting in Vienna, Austria. Picture by: Ronald Zak/AP/Press Association Images

Regency Murder Trial: Dowdall asked Gardaí if there was 'any way out'