US teenager at centre of viral video to sue CNN

US teenager at centre of viral video to sue CNN

Nicholas Sandmann was at the centre of a video with a Native American tribe elder who was playing a drum and chanting at an Indigenous Peoples March at the Lincoln Memorial on January 18th.

Sandmann, who is a student, was in Washington that day for a March for Life rally, wearing a red 'Make America Great Again' hat.

The video gained attention from CNN, The Washington Post, the Associated Press and other media outlets.

It had been suggested that the young boys were taunting the Native Americans.

But in a statement days later, Sandmann said "derogatory insults" were directed at his school group and they began to chant a school spirit message.

"I did not witness or hear any student chant 'build that wall' or anything hateful or racist at any time".

He claimed Native American Vietnam veteran Nathan Philips approached him with his drum, but he "never interacted" with him.

"To be honest, I was startled and confused as to why he had approached me", Mr Sandmann added.

"I believed that by remaining motionless and calm, I was helping to diffuse the situation. I realized everyone had cameras and that perhaps a group of adults was trying to provoke a group of teenagers into a larger conflict."

"I did smile at one point because I wanted him to know that I was not going to become angry, intimidated or be provoked into a larger confrontation". 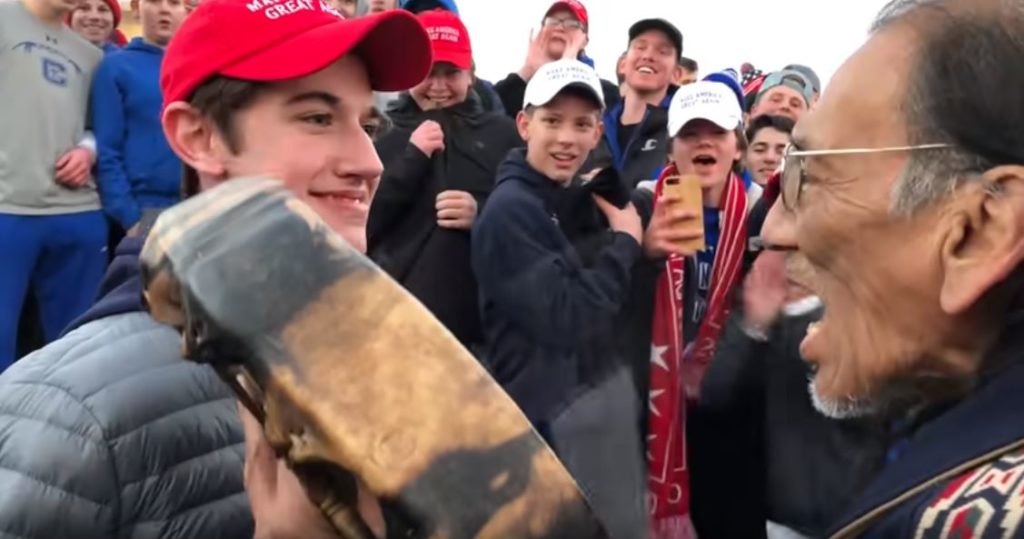 Nicholas Sandmann and Nathan Philips are seen in the video from January 18th | Image: YouTube/KC NOLAND

Speaking to Newstalk in January, Mr Philips said: "It wasn't a protest, but we was there for an indigenous people's gathering and there was a march and there was rally and it was a great event."

He said the reason for the gathering was "unity, bringing people together to work towards a better future, bringing indigenous people's from throughout the world to Washington DC.

"There was other marches throughout the world, I was told, that was happening at the same time that we were doing our little event in DC it was being done in different places around the world".

"We were just winding down, we had the permit until evening so that we could break down and our sound system and all those things that we had out there.

"And we had a lot of people there that were still there who just didn't want to leave because it was a good event".

Fox News has said the CNN lawsuit was filed in the US District Court for the Eastern District of Kentucky.

It claims that CNN "elevated false, heinous accusations of racist conduct" against Sandmann and failed to adhere to "well-established journalistic standards and ethics."

The teenager is already involved in a similar lawsuit, through his parents Lin Wood and Todd McMurtry, against The Washington Post.

The Washington Post suit was filed last month, and law firm Hemmer DeFrank Wessels said it was "only the beginning".

In a statement, the firm said: "The suit seeks $250 million in both compensatory and punitive damages.

"Lin and Todd will continue to bring wrongdoers before the court to seek damages in compensation for the harm so many have done to the Sandmann family."