Shortly after a joint press conference, a number of missile strikes hit Kyiv

The head of the United Nations says he believes the Security Council has failed in its primary purpose.

António Guterres was speaking as he visited Ukraine on Thursday.

Shortly after a press conference, a number of missile strikes hit the capital Kyiv.

He says five missiles hit the capital - at least one person was killed and several others injured during the strike.

Rescue officials say some civilians were trapped beneath rubble after the Russian attack.

Mayor Vitali Klitschko says the Shevchenkivskyi district, in the northwestern part of the city, was hit twice - causing fires in at least two high-rise buildings.

Explosions were also reported in Chernihiv, which is near the border with Belarus, and Fastiv in the central part of the country. 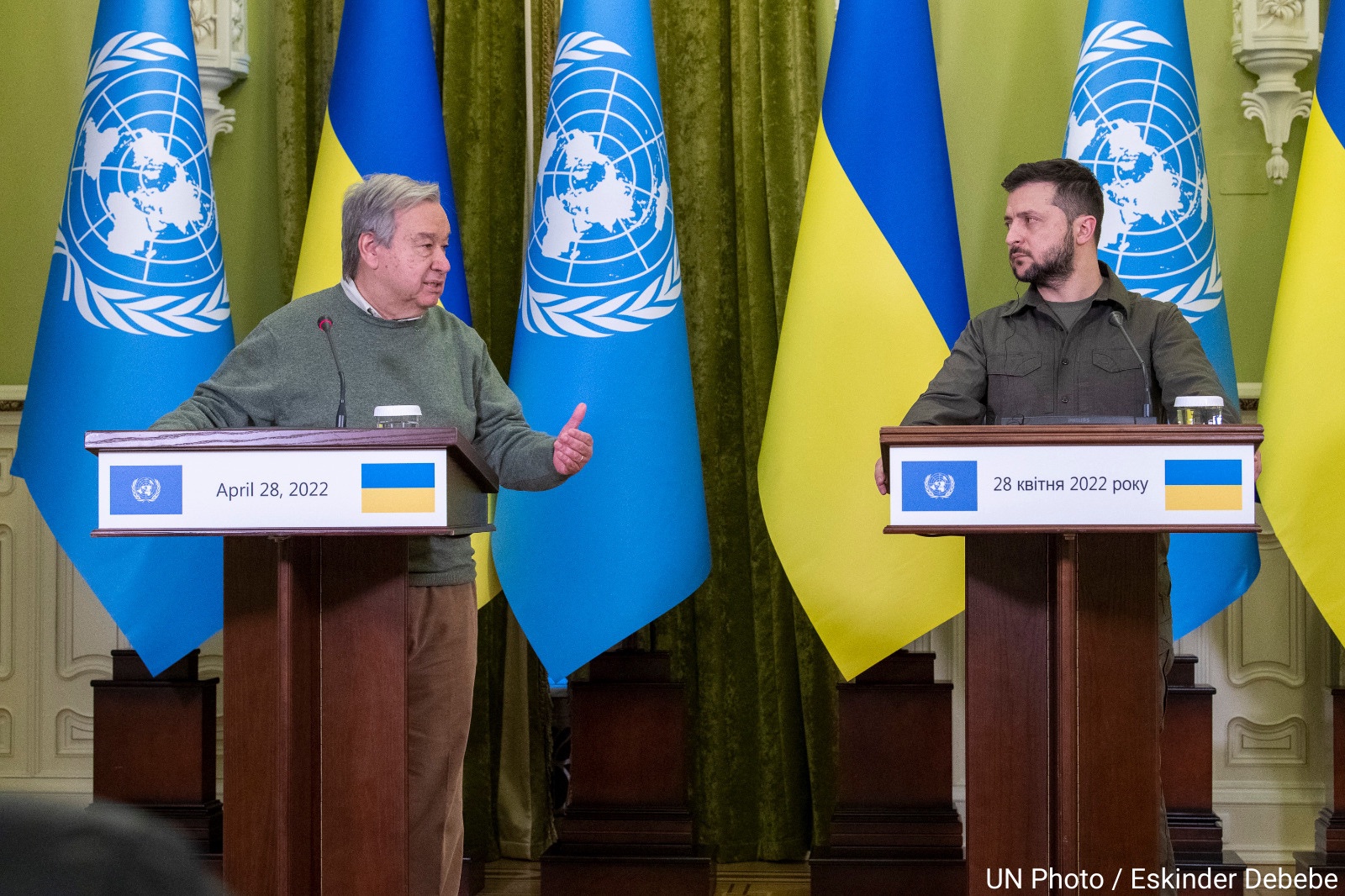 Mr Guterres says he believes the UN Security Council - of which Ireland is a member - failed to live up to its primary purpose to prevent the conflict.

"Let me be very clear: the Security Council failed to do everything in its power to prevent and end this war.

"This is a source of great disappointment, frustration and anger.

"But the men and women of the United Nations are working every day for the people of Ukraine, side by side with so many brave Ukrainian organisations.

"I salute the more than 1,400 staff of the UN - the vast majority of whom are Ukrainian nationals.

"They are on the ground in nine operational hubs and 30 locations."

'Words of solidarity are not enough'

He also reiterated support for Ukraine and its people.

"I want the Ukrainian people to know that the world sees you, hears you, and is in awe of your resilience and resolve.

"I also know that words of solidarity are not enough. I am here to zero-in on needs on the ground and scale up operations.

"This war must end, and peace must be established, in line the charter of the United Nations and international law.

"Many leaders have made many good efforts to stop the fighting, though these efforts - so far - have not succeeded.

"I am here to say to you, Mr President, and to the people of Ukraine: We will not give up."

‘I’m here to focus on how the UN can expand support for the people of Ukraine, saving lives, reduce suffering and help find the path of peace’ – UN chief @antonioguterres in #Ukraine, at a press conference alongside President @ZelenskyyUa @UN_Ukraine https://t.co/tlgqr8oER2 pic.twitter.com/k0ayn6EEa6

"I must say what I feel. I imagined my family in one of those houses that is now destroyed and black.

"I see my granddaughters running away in panic, part of the family eventually killed. So, the war is an absurdity in the 21st century. The war is evil."

He also says he fully supports the International Criminal Court, and appealed to Russia "to accept to cooperate" with it.

Meanwhile, Ukrainian authorities also reported intense Russian fire in the Donbas - the eastern industrial heartland that has become a key target for Russia.

Earlier on Thursday, a Ukrainian military official said Russian forces were "exerting intense fire" as they continued the second phase of their invasion.