UN calls for investigation after dozens killed in airstrike in Libya

At least 40 people have been killed after an airstrike on a migrant detention centre in Libya. Th...

UN calls for investigation after dozens killed in airstrike in Libya

At least 40 people have been killed after an airstrike on a migrant detention centre in Libya.

The Tajoura centre, located east of the capital Tripoli, was hit at around midnight on Tuesday.

The UN Refugee Agency (UNHCR) and the International Organization for Migration (IOM) have condemned the attack.

The two groups have called for a "full and independent investigation" to determine how it happened and who was responsible.

They say the airstrike left scores dead and dozens injured.

"For that reason, we expect the final death toll to include many more victims", they add.

Tajoura held at least 600 refugees and migrants - including women and children. 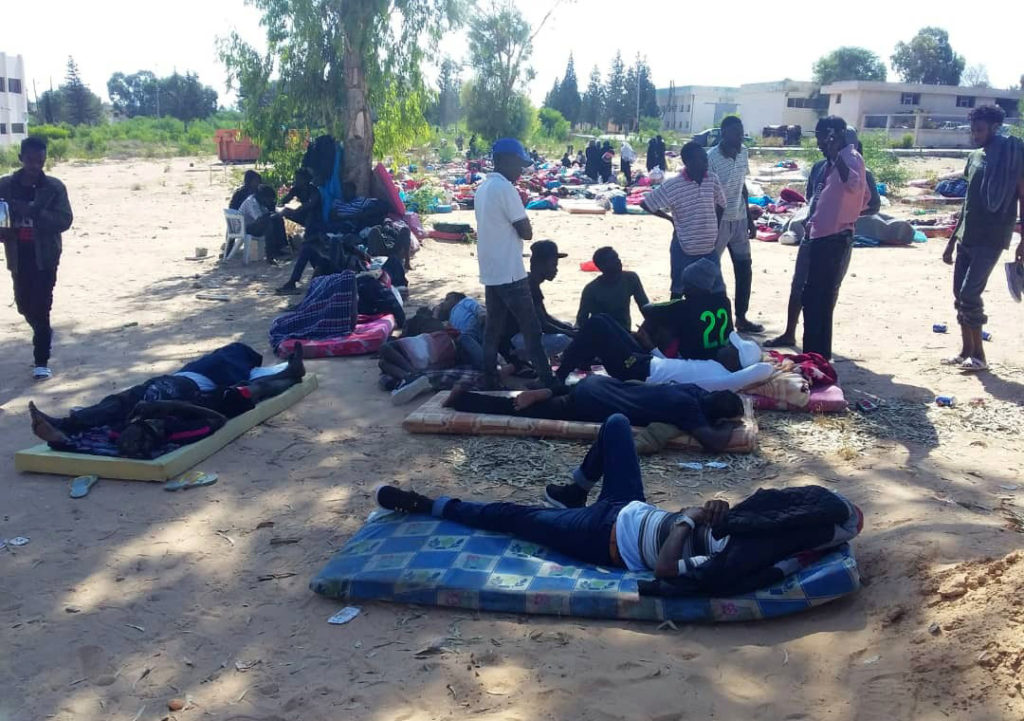 In this image taken on a mobile phone, people rest outside at the detention center in Tripoli's Tajoura neighborhood | Image: AP/Press Association Images

Most of the detainees are from Mali, Nigeria, Ivory Coast, Bangladesh, Morocco and Tunisia.

He says: "Last night's airstrike on Tajoura detention centre, which is reported to have killed dozens of migrants and refugees, is a horrific tragedy that could have easily avoided.

"There were over 600 vulnerable men, women and children in trapped in Tajoura detention centre at the time of the attack.

"Our teams had visited the centre just yesterday and saw 126 people in the cell that was hit.

"Those that survived are in absolute fear for their lives.

"This is not the first time the migrants and refugees have been caught in the crossfire of the conflict in Tripoli with multiple airstrikes on or near detention centres across Tripoli since the conflict started in early April.

"Just eight weeks ago in Tajoura detention centre shrapnel from the blast tore through the roof of the women's hanger and nearly hit an infant."

The charity says one of the cells were "completely damaged" in the attack, with another cell for vulnerable women detainees was partially affected.

Isabel Simpson, director of MSF in Ireland, adds: "This tragic event is the latest horror inflicted on detained people in Libya.

"Inaction and a complete lack of urgency to assist people has needlessly cost the lives of yet more vulnerable refugees and migrants.

"Returns to Libya are happening at an alarming rate and the reality is for every person evacuated or resettled this year, more than twice as many have been forcibly returned to Libya by the EU supported Libyan Coastguard.

"MSF calls for the urgent and immediate evacuation of all refugees and migrants held in detentions centers in Libya."