Northern Irish nationalist parties have overtaken unionists in the House of Commons for the first...

Northern Irish nationalist parties have overtaken unionists in the House of Commons for the first time following yesterday's general election in the UK.

Final results showed the DUP, who had been in a confidence and supply arrangement with the Conservatives, losing two seats. 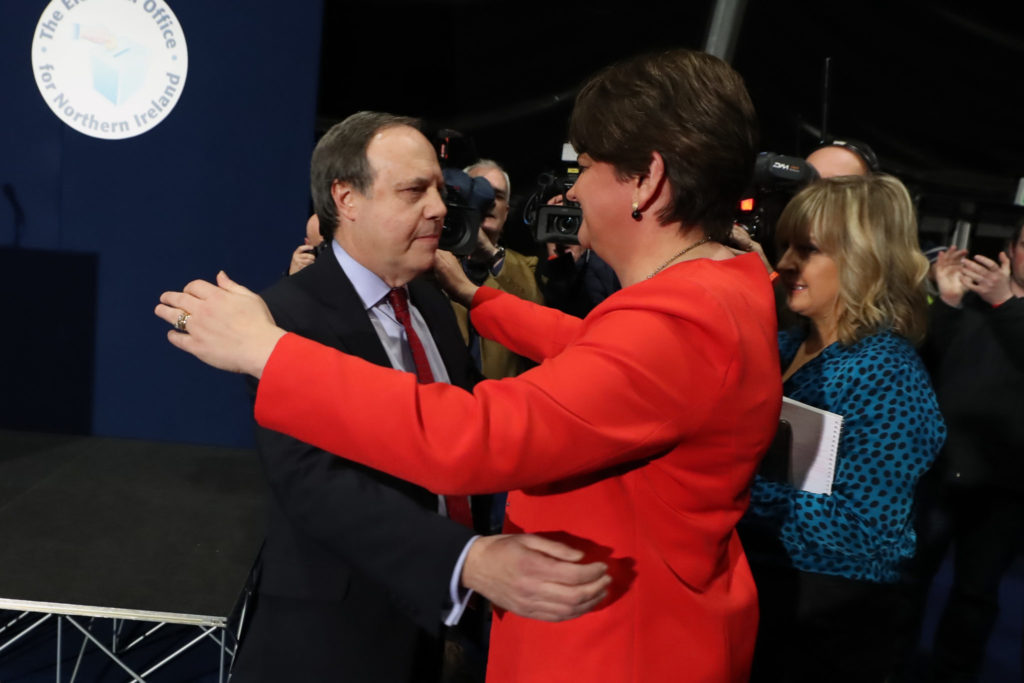 The DUP's Nigel Dodds is embraced by leader Arlene Foster after losing the Belfast North seat at the Titanic exhibition centre, Belfast, for the 2019 General Election. Picture by: Liam McBurney/PA Wire/PA Images

Sinn Féin retains seven seats - losing their Foyle seat but gaining North Belfast - while the SDLP went from no seats in the House of Commons to two.

While Sinn Féin MPs do not take up their seats in Westminster, the new SDLP MPs will.

The liberal and non-sectarian Alliance party picked up one seat, when Stephen Farry was elected in North Down - the seat formerly held by retiring independent MP Sylvia Hermon.

In total, the results mean the unionist DUP now has eight seats compared to nine for nationalist parties Sinn Féin and the SDLP.

Following a recount, Michelle Gildernew of Sinn Féin won the seat for Fermanagh and South Tyrone - the last of the 18 Northern Irish seats to be declared.

And it’s official @gildernewm is elected as the MP for Fermanagh South Tyrone 😊👏👏 pic.twitter.com/epbiE1DyjZ

Speaking about the results, DUP leader Arlene Foster said she hopes Brexit is now dealt with in a way that "brings the whole of the United Kingdom out of the European Union".

She said: "We will speak to the prime minister now next week... we will have conversations with him about the union and what it means for the union.

Speaking ahead of the final votes, Sinn Féin deputy leader Michelle O'Neill pledged that her party would continue to "stand up to defend Ireland's interests against Brexit".

She added: "Sinn Féin will be in the talks on Monday morning to work to secure a genuine power-sharing Executive which is credible and sustainable to deliver good government and properly resourced public services to all."