Irish embassies in Ankara and Athens say they are monitoring the situation, following a major ear...

Irish embassies in Ankara and Athens say they are monitoring the situation, following a major earthquake between the two countries.

The tremor measuring 7.0 hit parts of Turkey and Greece, destroying a number of buildings and leading to a tsunami warning.

The epicentre was in the Aegean Sea some 17km off the coast of Turkey's Izmir province, at a depth of 16km.

The earthquake was felt across the region - including in Istanbul, the Greek islands and as far as the capital Athens.

Turkish media showed wreckage of a multiple-storey building in central Izmir, with rescuers scouring the ruins. 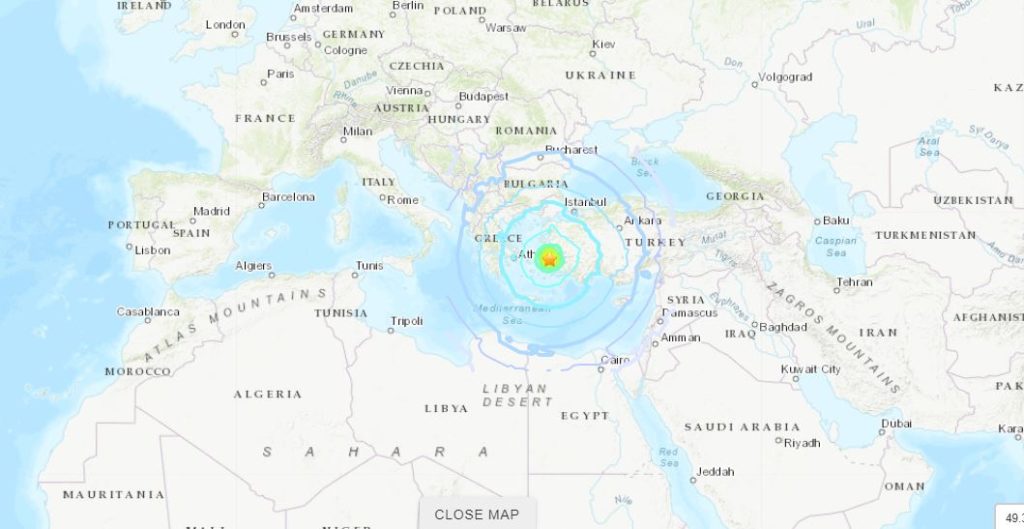 The location of the earthquake between Turkey and Greece. Source: USGS

The authorities said there was no immediate information on casualties.

Greek media said the residents of Samos and other islands fled their homes, while some rockfalls were reported.

The Irish embassy in Ankara said it was monitoring  the situation closely.

While the Irish embassy in Athens said 'reverberations' were felt in the Greek capital.

A large earthquake measuring 6.7 on the Richter scale struck off the eastern Aegean island of Samos today, sending reverberations that were felt here in Athens. We are currently monitoring the situation. Follow the advice of local authorities. We can be reached on +302107232771

A tsunami warning was issued, with residents told to stay away from the coastline.

Water rose above the dock in the main harbour and flooded the street.

Residents have also been told to stay away from buildings, as aftershocks continued to rattle the area.

Greek seismologist Efthymios Lekkas told state television: "It is an event that is evolving."

Main image: Several buildings were wrecked in Turkey's western Izmir province after a strong earthquake of magnitude 7.0 in the Aegean Sea. Picture by: Depo Photos/ABACA/ABACA/PA Images