Trump labelled 'biggest threat to the US' during Democratic debate

US President Donald Trump has been labelled as the biggest threat to the country during the first...

Trump labelled 'biggest threat to the US' during Democratic debate

US President Donald Trump has been labelled as the biggest threat to the country during the first 2020 Democratic debate.

Ten people hoping to oust Mr Trump as president have taken the stage in the first of back-to-back debates.

Over two nights, 20 presidential hopefuls will attempt to sell themselves to an audience of millions, as the one Democratic candidate to take on Mr Trump in the 2020 US election.

It is the American public's first chance to see all the major Democratic candidates in action against each other, and more female contenders will take part than ever before in US history.

Massachusetts Senator Elizabeth Warren was asked about her stance on abortion.

She said: "I would make certain that every woman has access to the full range of reproductive healthcare services - and that includes birth control, it includes abortion, it includes everything for a woman".

Sen. Warren on Roe v. Wade: "47 years ago Roe v. Wade was decided and we've all looked to the courts...as state after state has undermined Roe, has put in exceptions...we now have an America where most people support Roe. v. Wade. We need to make that federal law." #DemDebate pic.twitter.com/VTib9oP2pV

"We can do the things that are sensible: we can do universal background checks, we can ban the weapons of war - but we can also double down on the research and find out what really works."

"We need to treat this like the virus that's killing our children".

Warren says she wants to treat gun violence as a national health emergency: "We can do universal background checks, we can ban the weapons of war, but we can also double down on the research and find out what really works." #DemDebate pic.twitter.com/4PKUQq3Uqq

New Jersey Senator Cory Booker said: "I'm tired of hearing people - all they have to offer is thoughts and prayers."

"But the reason we have a problem right now is we've let the corporate gun lobby frame this debate.

"It is time that we have bold actions and bold agenda... this is not about policy, this is personal."

Booker on gun violence: "It is time that we have bold actions and bold agenda ... this is not about policy, this is personal." #DemDebate pic.twitter.com/YuiIg0BbKe

Immigration was also raised, and follows a recent spate of deaths on the US-Mexico border.

Images of the bodies of a father and daughter from El Salvador, who drowned whilst trying to get to the US, have shifted international focus back to the border crisis.

New York Mayor Bill de Blasio said: "Those tragic - that tragic photo of those - that parent, that child - and I'm saying this as a father.

All candidates were also asked what the biggest geopolitical threat to the US is right now.

Based on time constraints, each person could only give a one sentence answer.

Washington state Governor Jay Inslee replied: "The biggest threat to the security of the United States is Donald Trump".

.@chucktodd: What is the greatest geopolitical threat to the US right now?

Inslee: "The biggest threat to the security of the United States is Donald Trump." #DemDebate pic.twitter.com/rPU3S5EVMj

A number of candidates also gave answers to questions in Spanish, in an attempt to court Hispanic voters.

The first of which came from Congressman O'Rourke.

While Senator Booker used the opportunity to talk about immigration.

WATCH: Booker responds in Spanish when asked what he would do with immigration on Day 1 as president. pic.twitter.com/OeShed2sz1

Minnesota Senator Amy Klobuchar said his name a total of nine times during the televised debate.

Mayor de Blasio and Senator Warren did not mention him at all. 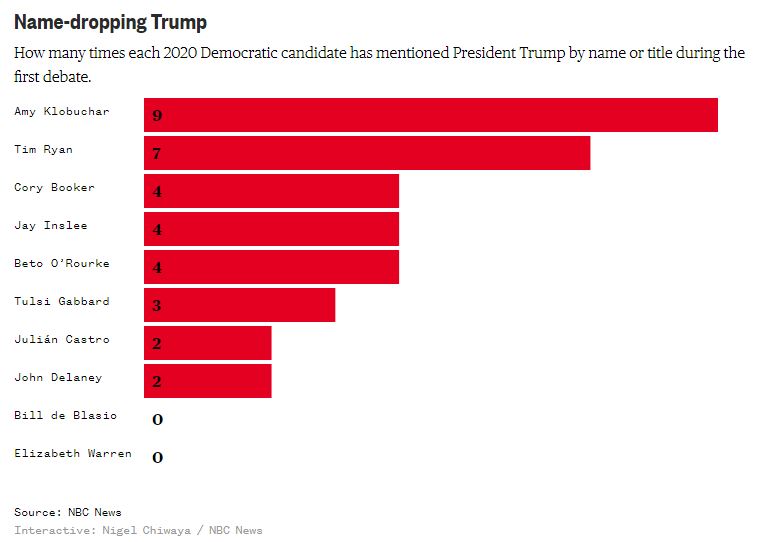 "And I don't think we should conduct foreign policy in our bathrobe at 5.00 in the morning, which is what he does."

Mr Trump himself simply tweeted the word "BORING!" while the debate was airing, without referencing it directly.

Here is a look at the Democratic candidates involved in the first debate.

The senator from Massachusetts was the first Democratic politician with a national profile to indicate a willingness to enter the race.

She is a former teacher and law professor and a fierce critic of Mr Trump.

The senator from New Jersey announced his candidacy on the first day of Black History Month, entering the race without using an exploratory committee first.

He is a former mayor of Newark and will not accept money from corporate political action committees (PACs) or lobbyists, hoping instead to gain enough finance from individual donations.

One of the breakout stars of the 2018 midterms, the former three-term congressman pushed senator Ted Cruz close in the Republican stronghold of Texas.

The Minnesota senator has been named by The New York Times and The New Yorker as one of the women most likely to become the first female US president.

The moderate with Mid-western roots entered the race on 10 February.

The 58-year-old from Manhattan is in his second term as mayor of New York City.

He has not released proposals as a presidential candidate but has called for higher taxes on the rich.

The US representative from Ohio is serving his eighth term in Congress and has written several books, including one about mindfulness.

He says he will recommit the US to the Paris climate agreement as president and reform the country's education system to include "social and emotional learning" in classrooms.

The first Hindu member of the US House of Representatives has been campaigning on a platform of tolerance and anti-hate.

She has previously received backing from Bernie Sanders but has been criticised by some progressives.

He was in the cabinet of former US President Barack Obama but has not held elected office at federal level.

Mr Castro was the youngster member of Obama's cabinet and was talked about as a potential 2016 vice president at the time.

The Washington state governor is the environmental candidate, saying defeating climate change is "the most urgent challenge of our time".

Originally from Seattle, he has overseen an economic surge in his state, which is consistently in the top 10 state economies.

The three-term representative for the sixth Maryland district was the first Democrat to enter the race.

He announced his intention to run in a Washington Post op-ed in July 2018.