US border crisis intensifies as Congress votes on aid packages

US border crisis intensifies as Congress votes on aid packages

A political battle is underway in the US over emergency border funding amid an intensifying migration crisis at the country's border with Mexico.

It follows a recent spate of deaths on the US-Mexico border, as well as serious concerns about conditions in US border facilities.

The New York Times reported yesterday that around 100 migrant children had been moved back to a Texas facility.

The site had previously been emptied "in the midst of criticism that young detainees there were hungry, crying and unwashed".

Amid the crisis, the acting head of the US Customs and Borders Protection, John Sanders, resigned on Tuesday.

No reason was given for his decision to step down early next month.

According to the Times, Mr Sanders is expected to be replaced by "immigration hard-liner" Mark Morgan.

International focus yesterday evening again shifted to the Mexico-US border following the release of images of the bodies of a father and daughter from El Salvador, who drowned whilst trying to get to the US.

The pictures show Óscar Alberto Martínez Ramírez and his 23-month-old daughter Valeria face down in the Rio Grande.

Mexican newspaper Le Duc reports that Mr Ramírez had swam the river with his daughter and then left her on the US side to go back for his wife. 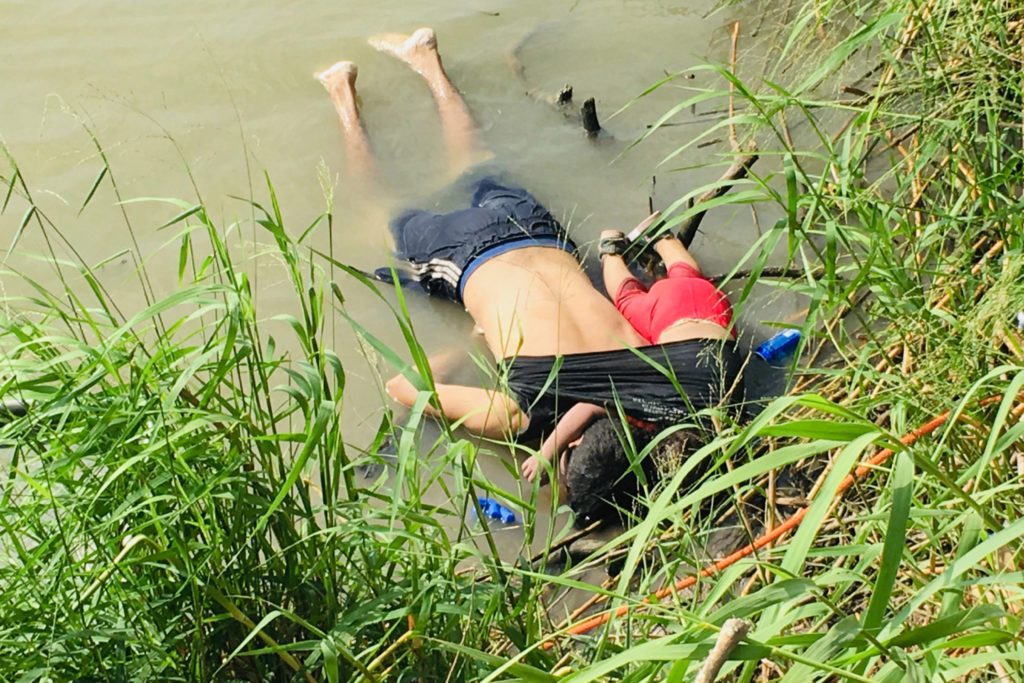 The bodies of Salvadoran migrant Oscar Alberto Martínez Ramírez and his nearly 2-year-old daughter Valeria lie on the bank of the Rio Grande in Matamoros, Mexico. Picture by: Julia Le Duc/AP/Press Association Images

However, Valeria panicked and attempted to reach her father, and both were swept away by the current.

Migrants attempting to reach the US have been taking more dangerous measures in the wake of the Trump administration's crackdown on undocumented migrants arriving at the southern border.

US border officials said they'd rescued another father and child from the Rio Grande on Monday, as the young girl was struggling to stay afloat during the perilous river crossing.

As the crisis worsens, politicians in the US Houses of Congress have been attempting to reach consensus on funding packages for border and immigration agencies.

On Tuesday, Democrats in the House of Representatives passed a bill to send $4.5 billion in humanitarian aid to address the crisis.

However, the bill still must pass through the Republican-controlled Senate, and could also face a White House veto.

Today, Senators will vote on a similar bill - however, it includes fewer restrictions on how the Trump administration can spend the money.

Speaking at the White House yesterday, President Donald Trump said he was "very concerned" about conditions at border facilities.

He insisted he was attempting to convince Democrats to back humanitarian aid - saying there appeared to be bipartisan support behind the Senate bill.

Prominent Democrats have repeatedly blamed the administration's harsh immigration policies for the crisis.

The high-profile progressive Alexandria Ocasio-Cortez has described border facilities as concentration camps - and insisted they should be closed.

The GOP has supported building mass concentration camps on the southern border. Kids & families are dying.

Now they want money for more - w/ ZERO negotiation on how $ is spent.

We can’t do that. They‘ve shown that when they get more money, they build more camps. #CloseTheCamps https://t.co/DYhXuU9Crz

The crisis has also become a talking point in the campaigning for the 2020 presidential elections - with Democratic hopefuls Julian Castro and Elizabeth Warren proposing that the law criminalising undocumented migrants be repealed.

I agree with @JulianCastro: We shouldn't criminalize families trying to build a better future. We need comprehensive immigration reform that's in line with our values and creates a pathway to citizenship for undocumented immigrants, including our DREAMers. https://t.co/KWzLmVnEBF