Travel restrictions to be eased for some countries from July 9th

Travel restrictions for people travelling to some countries are to be eased from July 9th. Cabine...

Travel restrictions to be eased for some countries from July 9th

Travel restrictions for people travelling to some countries are to be eased from July 9th.

Cabinet approved the plan this afternoon after considering the latest advice from the National Public Health Emergency Team (NPHET).

As expected, Ministers have also agreed to move to Phase Three of reopening.

Meanwhile, it will be madatory to wear a face mask on public transport from Monday as bus, train and Luas services increase capacity to 50%.

Speaking at Dublin Castle this evening, the Taoiseach Leo Varadkar said almost all remaining businesses can reopen from Monday.

“We will move to Phase Three on Monday when almost all remaining businesses, amenities and workplaces can reopen,” he said.

“We have also decided to begin easing travel restrictions between Ireland and some other countries from July 9th and approved a grant scheme to assist those who are self-employed and sole traders to get back to work.”

The move to open the 'air bridges' with countries that have low levels of the virus comes despite a warning from the Chief Medical Officer Dr Tony Holohan that he was concerned overseas travel could lead to a spike in the virus.

In a statement this evening, he said NPHET had "expressed a clear view that overseas travel poses a risk to importation of the disease and to further transmission in Ireland." 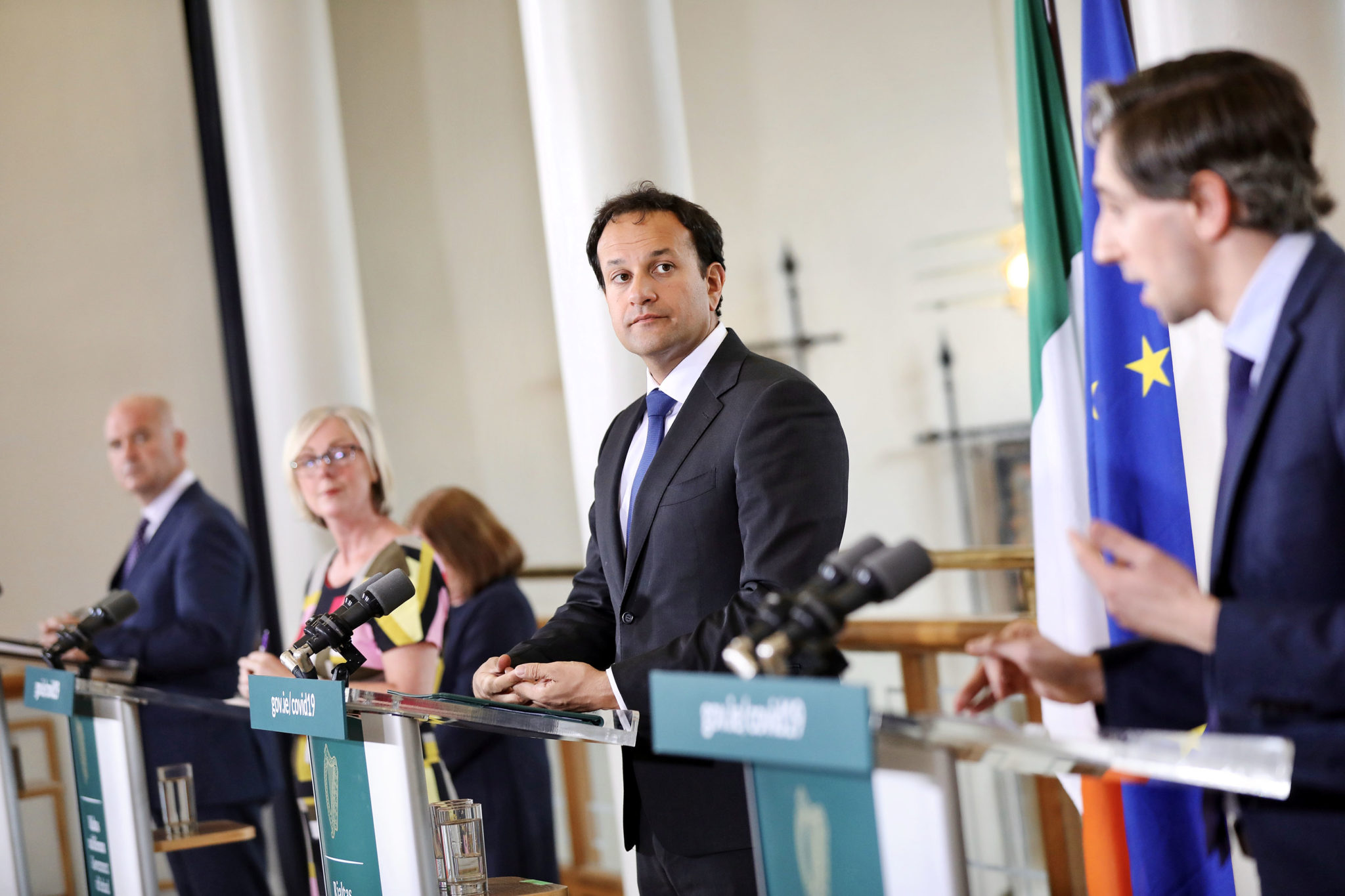 Mr Varadkar said a 'green list' of countries would be published in the next two weeks. Anyone travelling to or from any of the countries on the list will not have to quarantine.

He said airport officials would also be stepping up checks and controls on people arriving in from countries not included on the list. Meanwhile, the passenger locator form for passengers arriving from unapproved will now move online.

There will also be an "expanded list of exceptions" for people arriving without the need to quarantine.

"There are essential employees that we need to come into the country - whether it is someone coming to fix the MRI machine or something like that - we need them," he said.

He said the green list will be created at an EU level based  on a mix of different epidemiological criteria.

"I do need to caution people that that list of countries will be reviewed and may change every two weeks," he said.

"So we may see it getting longer but, if a country ends up having a second wave or there are particular spikes, then they may be taken off that list as well."

Meanwhile, the Social Protection Minister Regina Doherty said the Enterprise Support Grant has been extended to sole traders and the self-employed to help get people back to work.

The school meals programme has also been extended for children taking part in summer education programmes.

Mr Varadkar said he hoped a national day of commemoration could be held in the coming months “so we can mourn together as a nation and grieve for what we have lost.”

He said the country will overcome the effects of the lockdown if the public shows the “same courage, the same determination and the same care for each other” as they did when restrictions were announced.

It was likely to Mr Varadkar’s last speech as Taoiseach for the foreseeable future and he said holding the position has been the “greatest honour of my life.”

“I want to end by saying thank you to the men and women who kept our country protected and guided us through this emergency," he said.

He said the country “owes a profound debt” to Dr Holohan and to the “countless civil and public servants who worked behind the scenes to keep our country on its feet.”

“This evening, I’ll end with no poem, no quote and no words of inspiration because none are needed,” he said.

“Until now we needed some hope to cling to, but your actions have kindled that hope and turned it into a reality. So instead, I will end by thanking each and every one of you.

"Only you know the true weight of the burden you carried over the past few months. I know that sometimes you were able to share that burden and sometimes you had to carry it alone and I am sorry for everything you had to go through.

“Your actions, your choices, your sacrifices and your decisions changed the destiny of our country and saved us from the worst. By following the public health advice, by choosing to restrict your lives, you helped suppress the virus and you saved lives.

“Our country has suffered but it has prevailed and we emerge to face a new day.”