Thousands of Celtic Tiger homes in Ireland are unsafe because of housing defects and Minister for...

Thousands of Celtic Tiger homes in Ireland are unsafe because of housing defects and Minister for Housing Darragh O’Brien has urged members of the public to come forward with their experiences of the problem.

Minister O’Brien has established a working group that will examine defects in apartments built between 1993 and 2013.

Many such properties were built during the Celtic Tiger and the Construction Defects Alliance campaign group says many are a danger to those who live in them:

“It’s estimated that at least 100,000 of them are affected by fire safety defects, leaky balconies and defective roofs due to shoddy building and ineffective building control,” a spokesman for the group told the Irish Times.

However, Mick Clifford, special correspondent with the Irish Examiner, believes that getting people to testify about problems with their property will not be easy:

“An Oireachtas committee hearing heard there were an estimated 90,000 apartments that could well be affected by these defects,” Mr Clifford told The Hard Shoulder.

“But an issue arises in that a fair number of them would be investor owned, as opposed to owner occupier, and irrespective of which it is… you could well imagine that if someone thinks there’s an issue around defects, perhaps some would like to keep it quiet until they sell on.

“Understandable on one level but certainly a major issue in terms of apartments perhaps being sold to people and they’re not in proper condition and that’s not being made known.”

One person who has lived in an unsafe property is Mark Fitzmaurice, resident of Riverwalk Court in Meath.

“Riverwalk Court, there’s 26 apartments, they’re timber framed structures, it’s an Austrian designed system. It was built in 2002 and 2003,” he described.

“Some defects started to come to light in 2009; water ingress defects [when water infiltrates a property] is what we were starting to see.

“And it was during the investigation of the water ingress defects that the fire safety defects came to light.

“The engineers… who were doing their inspections found the fire safety defects and compiled a report which they then presented to the local authority, Meath County Council, to their fire officers and fire department.” 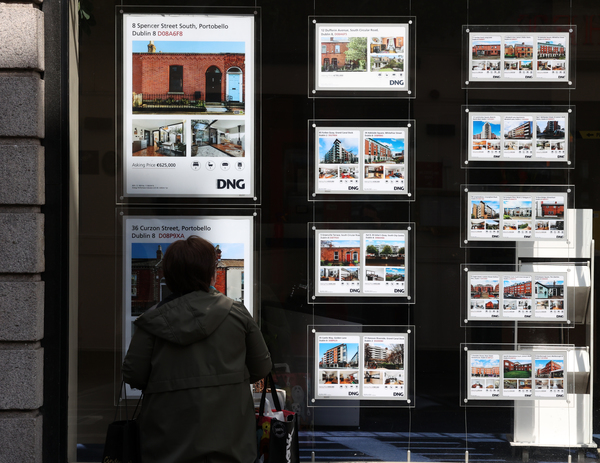 Pictured adverts for houses and apartments for sale and for rent. Photograph: Sam Boal / RollingNews.ie

“A lot of people who find themselves in this situation, especially with apartments that were built during the boom or just before the bust, a lot of those developers went out of business.

“So they’re left with no one to go and talk to. The problem with fire safety defects is they’re not covered under the home bond or the premier guarantee scheme. Only structural defects are covered.”

Submissions to the working group can be made here.