There could be 80,000 Ukrainians in Ireland by the end of the year - Coveney

"There are no easy answers here" - Coveney on Ukrainian refugees in Ireland.

There could be 80,000 Ukrainians in Ireland by the end of the year - Coveney

There could be 80,000 Ukrainian refugees in Ireland by the end of the year – and the country will continue to show them solidarity and generosity.

On The Pat Kenny Show this morning, the Foreign Affairs Minister said the influx of people from Ukraine was putting the Irish system “under a lot of strain”.

Simon Coveney urged people to consider the situation in context – noting that Ireland’s response was part of the country’s war effort in support of Ukraine.

He was speaking as new figures show there are now 62,000 Ukrainians living in Ireland. Some 46,000 are in Irish homes, hotels and hostels, while 17,000 are in Direct Provision.

It means one-quarter of the country’s hotel rooms are now being used by Ukrainian families.

“Is that sustainable in the long term?” asked Minister Coveney.

“No, it is not, in the context of the demands and pressures of a very vibrant tourist industry post-COVID – but we’re going to have to work through that.

“There are no easy answers here. There will still be, in my view, a lot of Ukrainian families in hotel rooms into the spring of next year but we are working on alternatives.

“Whether it is persuading more families to invite and accept Ukrainian families into their own homes – which I think is a very good solution for families that may have space and want to show generosity towards a country and a people currently at war.” 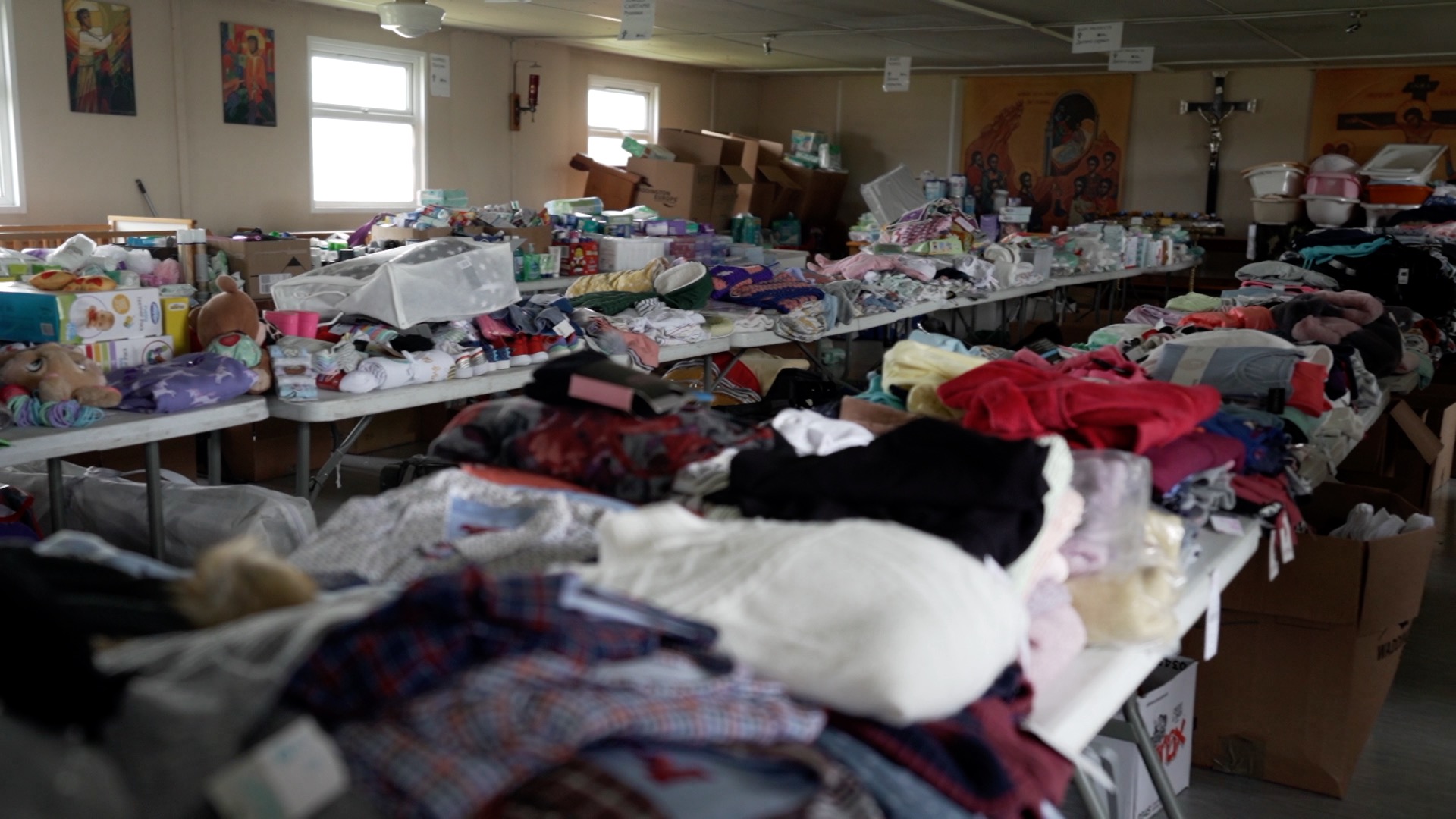 Donated clothes at the Gormanston Army Camp. Image: Department of the Taoiseach

Minister Coveney said Ireland was responding to a unique series of circumstances – and there could be as many as 80,000 Ukrainians living here by the end of the year.

“This is a war effort from Ireland,” he said.

“To accommodate close to 63,000 people over an eight-month period is something that certainly has never happened in my lifetime.

“It has put the Irish system under a lot of strain in terms of accommodation, in terms of education, in terms of healthcare, in terms of social supports – we know that, but this is something that every European country is trying their best to offer solidarity towards Ukraine on and Ireland should be no different.”

The Foreign Affairs Minister said the vast majority of Ukrainians living here want to go home – but they are unlikely to do so until spring at the earliest.

“A lot of Ukraine is now in darkness at night-time,” he said. “Their electricity grid has been deliberately targeted by Russia.

“Russia has been, for a number of months now, deliberately targeting civilian infrastructure, like water systems, like energy generation plants, the grid system and so on.

“Even Kyiv the capital has blackouts at night-time and this is a country that has very, very cold winters.

“So, I think it is unlikely we are going to see a large number of Ukrainians returning home any time soon.

“I think those circumstances could change in the spring quite dramatically if we can find a way of bringing this war to an end.”

In the meantime, Minister Coveney said Ireland would support the people of Ukraine so that when people look back on the war, “we can say that we acted with solidarity and generosity when it was asked of us”.