There are calls for a development to be halted that would 'change the character' of a part of Dub...

There are calls for a development to be halted that would 'change the character' of a part of Dublin city.

Under the plans, a boutique hotel and restaurant would be built at Merchant's Arch in Temple Bar.

The area, which dates from the 1820s, is a laneway as you enter Temple Bar from the Ha'penny Bridge.

Among those voicing their concerns are singer Imelda May and comedian Dara O'Briain.

Can’t believe there's a proposal being seriously considered to replace Dublin’s Merchant’s Arch with (yet another) hotel. There is something magical about crossing the river via the Ha'penny bridge, plunging into Merchants Arch. Let’s not destroy the rich texture of Dublin! https://t.co/CpuIbeG6Fd

The actual arch way itself is set to remain - while it is believed people would still be able to walk through the lane as they do now.

But an existing two-storey building housing shops is to be demolished, and a three storey over-ground and basement building - which will be five floors in all - will house a restaurant and hotel.

Frank McDonald is chair of the Temple Bar Residents Association.

He told Josh Crosbie for The Hard Shoulder this is not something that is needed.

"That laneway, which is kind of Dublin's own little version of a souk, that you'd find in a Middle Eastern city.

"We regard it as being particularly important that that character of Merchant's Arch should be maintained.

"Also this year marks the bicentenary of the creation of Merchant's Arch - so it's a very, very historic route in the city and that is part of its charm. 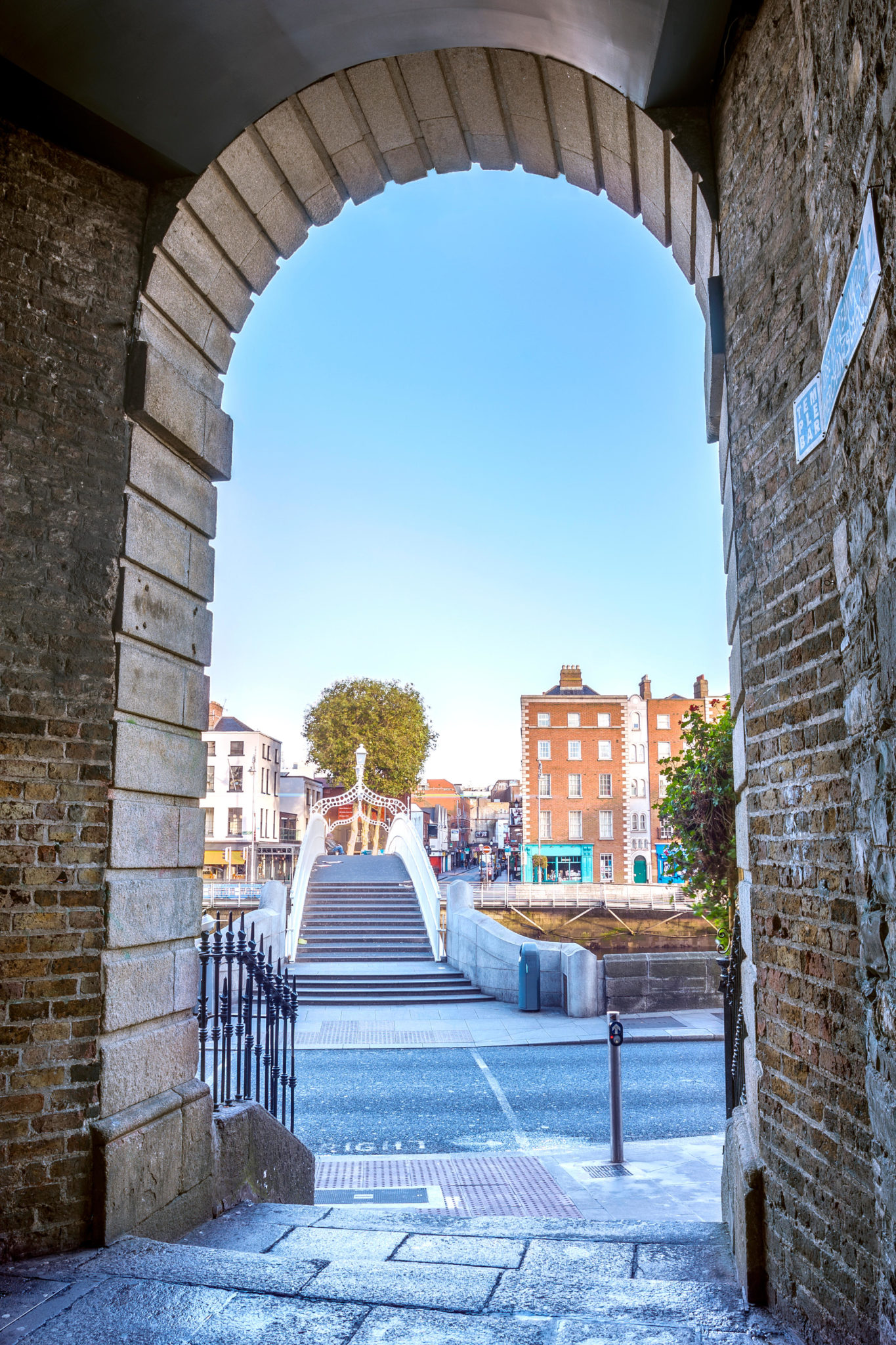 A view of the Ha'penny Bridge from Merchants Arch in Dublin in October 2014. Picture by: Aitormmfoto / Alamy Stock Photo

"The building of a four-storey hotel, with a so-called restaurant at ground floor and basement levels, is just going to fundamentally change the whole character and appearance and feel of Merchant's Arch."

He says they believe this is a 'Trojan Horse' for another pub.

"Nobody could argue that Temple Bar needs another restaurant - there was only about 11 restaurants in the area before 1990.

"And now there's about 87 restaurants.

"So to argue that there's a need to create further restaurants in Temple Bar, especially - as we believe - it's a Trojan Horse for another licenced premises, another public house.

"And that is something that Temple Bar needs like a hole in the head".

'More people into the area'

Sean Ryan is bar manager at the Ha'penny Bridge Inn. He says a new hotel would be welcome.

"The more the merrier that will bring more people into the area - what more can you ask at the end of the day?

"We need something back after the last year and a half - I do accommodation myself here, it's great having a few more people around the place bringing business into the area."

Asked about concerns over changes to the arch, he says: "They need to sort out the rest of the town, I think they've a bit more priorities than stopping a few people trying to make an extra few quid for themselves".

While Maros, who runs a craft shop in Temple Bar, says another hotel is not what the city needs.

"It's a little bit of a pity because the city centre, Temple Bar should be a really artsy place.

"But so far it's just more and more big businesses coming in and it's not what it's supposed to be."

He says while it may bring more people in, it will also bring in more big companies.

"Then more big business is going to come, that's going to be bad". 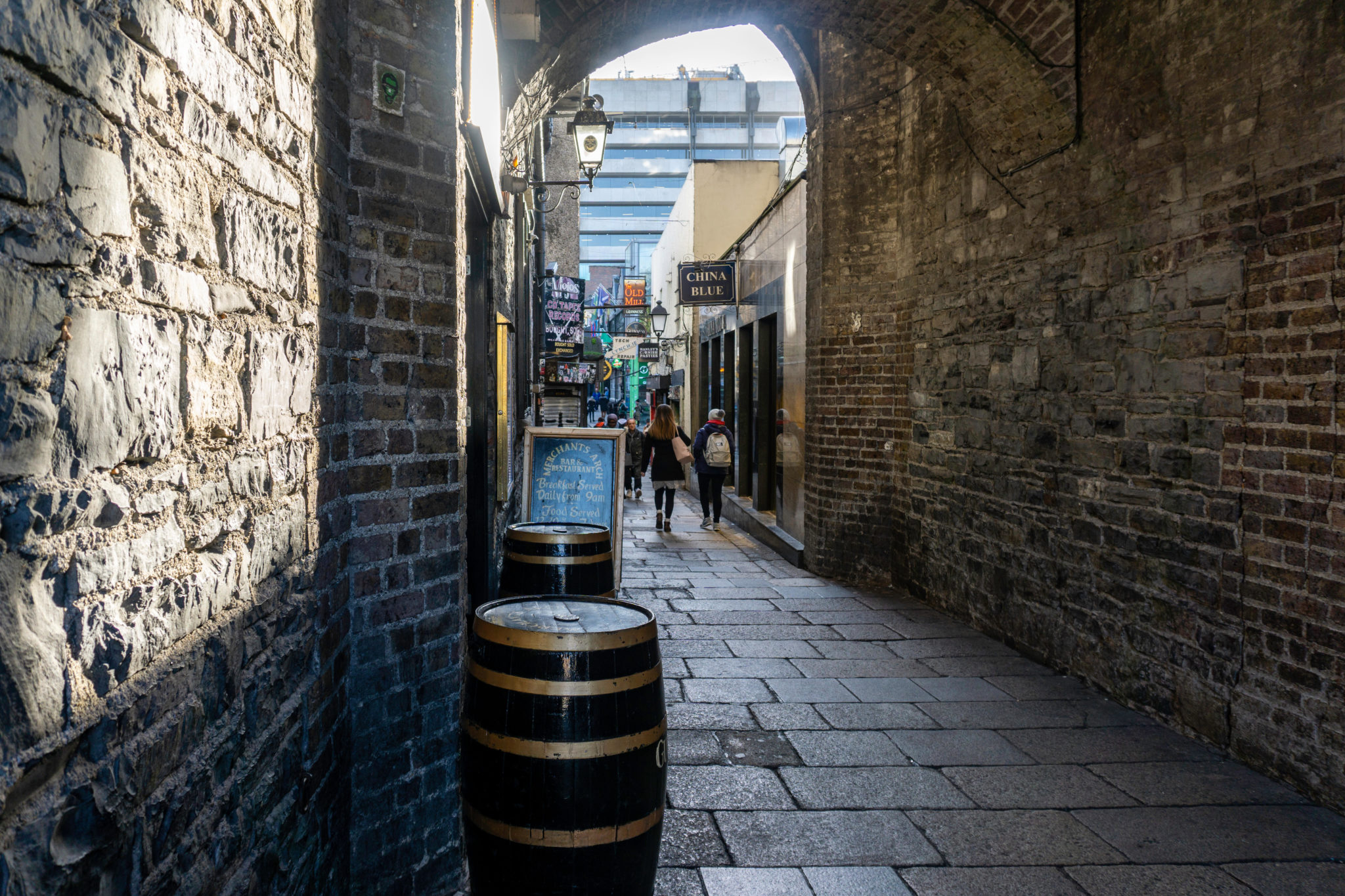 Martin Harte is CEO of the Temple Bar Company, which represents businesses in the area.

He says: "I think it's a positive development - Temple Bar is subject to a number of new developments over the next year or two years.

"You'll have the development of that corner there, which is a pretty unsightly corner on Temple Bar Square.

"So I think this addition of this hotel will animate that.

"There's a proposal to redevelop the entire square, which we're hoping Dublin City Council are going to start later this year.

"And then of course you have the Central Plaza on the top of Crown Alley.

"These developments they're going to really enhance and develop Temple Bar, and make it more attractive for visitors and for those who live and work and use the space."

He says he welcomes other points of view, but this is good for the area.

"Of course people are going to object and all sorts of things; that's OK, we have the most open and democratic planning process in the world.

"Probably too democratic for some people, like the heritage groups in this instance.

"So I think everyone's got their point of view raised, the issues have been dealt with but this development is a positive development."

'I think we can do without'

Josh also spoke to members of the public to gauge their reaction to the plan.

One man says: "There's too many hotels... but taking away from the look of it.

"That bridge is known for, the Ha'penny Bridge, and the Arch - so what would you take away the face of Dublin basically for?"

Another man says: "I don't think there should be because there's enough hotels around the city centre.

"I know it would be a great location to have a hotel, but there's a lot of anti-social behaviour in Temple Bar... everything's over priced.

"I think we can do without in this area."

And one woman suggests: "I live outside the country seven years, and I've just returned to Dublin after two years.

"And I'm absolutely shocked to see the way Dublin has gone, so I would strongly object if I lived here to something like this.

"I think there's far too much here... they've ruined Dublin - the only thing that's familiar to me is the seagulls".

An online petition is also calling for the works to be halted.