Speculation over name and title of Prince Harry and Meghan's baby

Speculation is growing over what Britain's Prince Harry and Meghan Markle will name their newborn son.

Congratulations have been sent from across the world to the couple who became parents to a boy on Monday.

We are pleased to announce that Their Royal Highnesses The Duke and Duchess of Sussex welcomed their firstborn child in the early morning on May 6th, 2019. Their Royal Highnesses' son weighs 7lbs. 3oz. The Duchess and baby are both healthy and well, and the couple thank members of the public for their shared excitement and support during this very special time in their lives. More details will be shared in the forthcoming days.

Prince Harry has confirmed the child was a little overdue, and they plan to announce his name in the coming days.

He also said Meghan and the new arrival are both doing well.

This afternoon, His Royal Highness The Duke of Sussex shared the news of the arrival of his and the Duchess' first born child. Their son was born early morning on the 6th of May, 2019 and weighs 7lbs and 3oz. Their Royal Highnesses thank you for your support and kindness during this exceptionally joyful time in their lives as they welcome their baby boy.

There is also some speculation over whether the newest member of the British royal family - who is seventh in line to the throne - will have a royal title of His Royal Highness.

Technically, the baby will be a prince but not until Prince Charles becomes king.

All Queen Elizabeth II's grandchildren have a right to the title - but this could be dropped at his parent's request.

This baby is the queen's eighth great-grandchild.

Reaction has also been coming in from Meghan Markle's Los Angeles neighbourhood where she grew up.

Local news crews set up across the road from the family home.

A city used to a hierarchy of its own sort of royalty is now feasting on being part of the real thing. 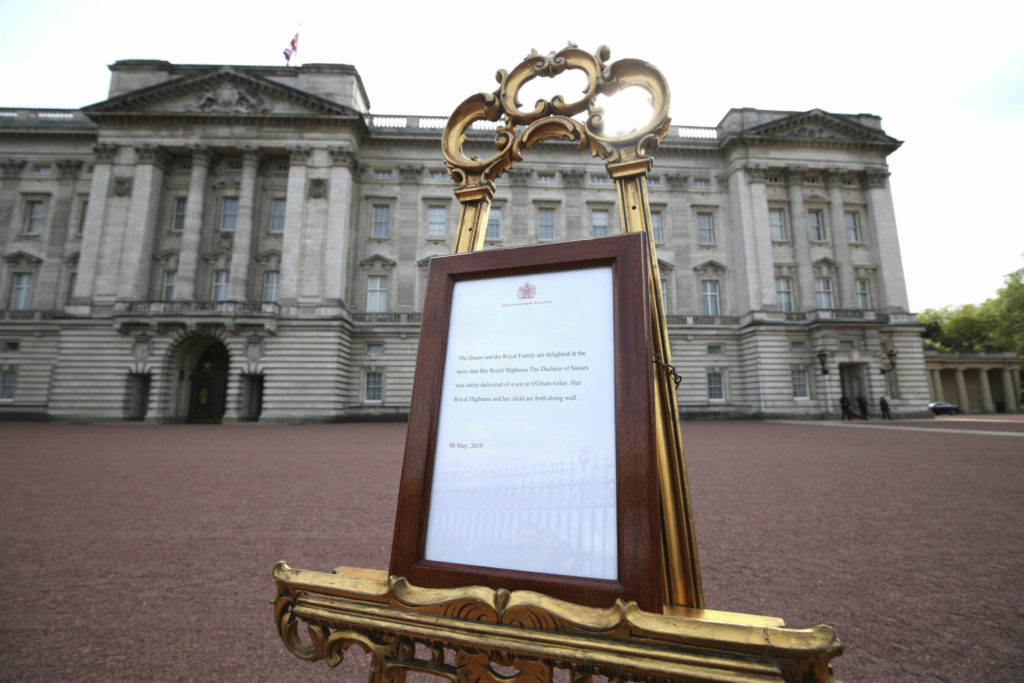 A notice placed on an easel in the forecourt of Buckingham Palace in London to formally announce the birth of a baby boy to Britain's Prince Harry and Meghan Markle | Image: Yui Mok/AP/Press Association Images

In such a diverse city as Los Angeles, there is some surprise that the birth of a biracial baby into the royal family has become noteworthy.

But comedian Angie Stocker, a mum of two in her own biracial family, said the conversation can only be helpful.

She said: "Being biracial is out there. It's not crazy, we're not a different species, we're all people.

"I feel like it's important to talk about it and when it becomes a talking point I think that's good because that means something is going to change."

As Americans digested the news of the new arrival in the UK, the question also arose over whether the royal baby could grow up to one day run for president of the United States.

As the child of a US citizen and therefore born a citizen himself, it would appear to be a possibility, subject to all kinds of legal manoeuvring on both sides of the pond.

No-one can run for president until they are 35 though, so the Sussexes have a few years before they have to worry about the political implications.