The sod has been turned on the new runway at Dublin Airport. The Taoiseach Leo Varadkar and Trans...

The sod has been turned on the new runway at Dublin Airport.

The airport says the runway will support the creation of 31,200 Irish jobs, as well as driving some €2.2bn of economic activity by 2043.

Construction will take about two years to complete - and this will be followed by testing and commissioning.

This is exactly how I thought I’d spend Valentines morning. The Taoiseach throwing sod at journalists at the launch of Dublin Airports new runway pic.twitter.com/wE5bJzK9lu

The €320m runway will be funded by the daa through its own revenues and borrowings.

About 300 construction jobs will be created onsite during the the project, with "hundreds more" in sub-supply firms offsite.

The commissioning phase of the runway will also create additional employment both onsite and offsite.

The 3.1km runway is a joint venture between Irish firm Roadbridge and Spanish construction company FCC.

Residents who live near the airport held a protest outside the launch.

Number of residents who live near the Airport protested outside the launch of the new runway as Leo Varadkar and Shane Ross turned the sod pic.twitter.com/thYQ2VSm7c

CEO of the daa, Dalton Philips, said they have been accommodating to residents impacted.

"There are residents that are impacted and clearly we engage with them, and we're concerned about that.

"And there are about 250 houses that are impacted - you compare that to (London's) Heathrow, on the similar contours you've got about 42,000 households impacted". 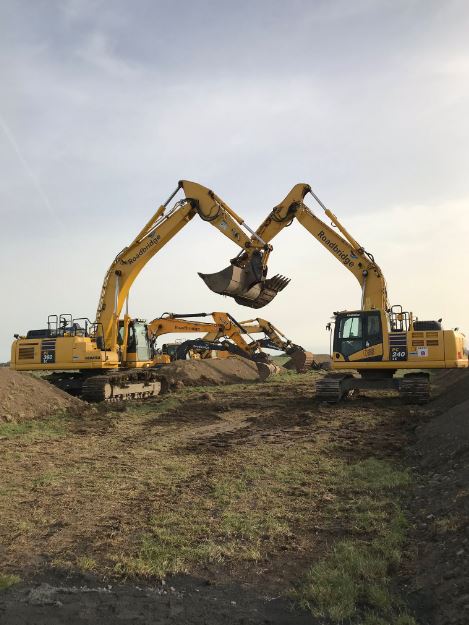 Ibec, the group that represents Irish business, has said a second runway at Dublin Airport - and expansions to other airports - are needed.

Ibec CEO Danny McCoy said: "A second runway at Dublin Airport is a vital piece of infrastructure and critical for the Irish economy to achieve these ambitions.

"It is crucial for both trade and tourism and is particularly important in a post-Brexit context.

"Increased strong growth in frequencies and services in our national airports will play an essential role in our economic prosperity.

"Such investments are vital not just for today or tomorrow, but to ensure the growth of our economy for the next 50 years", he added.

It comes following a capacity review of the county's airports from the Department of Transport late last year.

It found that how passengers get to and from Dublin Airport in the future will be critical to any decision on terminal development.

It also recommended timeframes for new or adjusted infrastructure to pre-empt any capacity constraints at Cork and Shannon.

Minister Ross has previously said a third terminal is "on the table" for Dublin Airport.

While the daa has disputed the need for a third terminal 'in the medium term'.

This is to deliver new boarding gate areas, aircraft parking stands and other improvements.

On any prospects of a third terminal, the daa said its position "has been consistent over the past two years".

"The airport urgently requires a new runway, new boarding gate piers, aircraft parking stands and other improvements rather than a new terminal in the medium term.

"This view is held not just by daa, but also by its main airline customers at Dublin Airport.

"In this context, daa welcomes the fact that the Oxford report states that 'the incremental expansion of Terminals 1 and 2 is desirable' so investment in new capacity should continue.

"daa's key priority at Dublin Airport is to press ahead with its major programme of investment works to address capacity issues and meet the needs of our airline customers."

Fears for up to 1,000 jobs at Dublin and Cork airports