Fórsa is calling on the Government to confirm whether it is willing to negotiate an “entirely new pay structure” for school secretaries.

School secretaries around the country downed tools this lunchtime to protest against what they claim is a “two-tier pay system,” which forces many to sign on to social welfare during the school holidays.

The Fórsa trade union said secretaries that are not directly employed by the Department can earn as little as €12,500 per year with no sick pay or annual leave entitlements.

Today in Holywell we went on strike to #SupportOurSecretaries for all of the vital work they do in school. @EducateTogether @forsa_union_ie #sos pic.twitter.com/UQKgP7r0xo

In a statement last night the Education Minister Joe McHugh urged the union to return to suspend the strike action and return to the Workplace Relations Commission.

He said he understands the issue regarding the secretary’s employment conditions and believes there is a need for “deep engagement on this issue.”

Today, Fórsa said it is ready to return to the WRC if the Government shows it is “genuinely willing” to bring an end to the two-tier system. 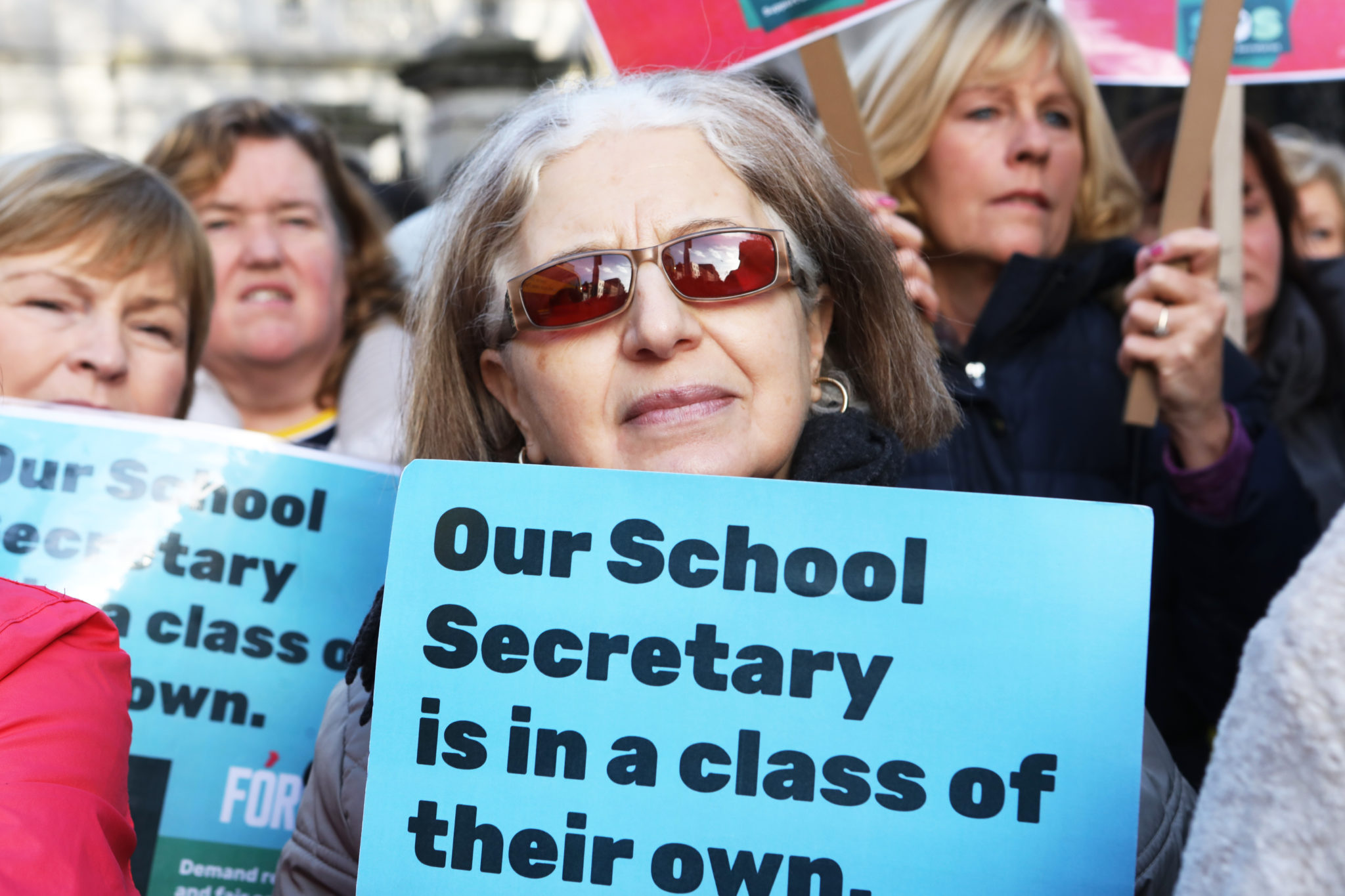 Andy Pike, head of Fórsa’s education division said the Government must be ready to negotiate a new pay model – and be willing to base it on Department of Education clerical officer pay scale.

He said the solution must ensure school secretaries receive “basic employment rights like paid holidays and sick leave” and are not laid off at the end of each school term.

“In his media statement yesterday, and in a radio interview today, Minister McHugh seemed to suggest that the Government would move off its rigid position if we were to re-engage at the WRC,” he said.

“While this has not been our experience during the talks that took place between October and December, we are prepared to re-engage on this basis, if only to see if there is any real movement on the Government side.

“I hope that Minister McHugh, his officials, and his Government colleagues will note the solid determination that school secretaries have shown today and throughout this campaign – as well as the incredible levels of support and respect they have earned from parents, school colleagues and management, and the wider public.

“He should be in no doubt that there will be a swift return to industrial action if it turns out that his comments yesterday and today were not made in good faith.”

He said Fórsa's experience in the talks so far has been that Minister McHugh's statements "positive though they are, are not matched by the actions of those who are negotiating on behalf of the employers."

Some more images of our staff and students supporting our wonderful secretary Valerie and Senior School secretary Elaine in their Industrial Action for fair pay and conditions today #SupportOurSecretaries @Independent_ie @forsa_union_ie @dublinnorthcity@INTOnews pic.twitter.com/PaHob1w9GU

Yesterday, Minister McHugh said his department is “reflecting on the last round of talks but warned “there is still some distance” between the two sides.

“We are fully open to further dialogue with Fórsa,” he said. “The only way this situation will be resolved is with the help of the WRC.”

“Disputes such as this can only be solved by the parties sitting around the table together and trying to reach mutually acceptable solutions.

“Both sides will have their own positions, but compromise is necessary or nothing would ever be resolved.”

He said department officials are continuing to assess the impact of the strike on schools.

ASTI President: Minister 'speaking out of two sides of his mouth' on school reopening plans